By now, even the dimmest of Muggles knows that the Wizarding World of Harry Potter is a smashing success. Ever since this theme-park-within-a-theme-park opened at Islands of Adventure at the Universal Orlando Resort, people have been raving about the "Harry Potter and the Forbidden Journey" attraction as well as Hogsmeade's highly-themed shops and restaurants.

But when you get right down to it, what's the most successful aspect of The Wizarding World? 'Forbidden Journey''s state-of-the-art ride system? The dazzling effects that theme park visitors experience whenever they visit Ollivander's wand shop? Or -- for that matter -- the overall look of Hogwarts Castle and Hogsmeade Village? Which make you feel as though you've stepped inside one of the "Harry Potter" movie?

And the answer is... none of the above. Based on surveys that UOR employees have done, the greatest Guest Satisfier in the Wizarding World of Harry Potter, that piece-of-the-magic that people most wish that they could take home and share with friends and family... is a beverage. Butterbeer, to be precise. 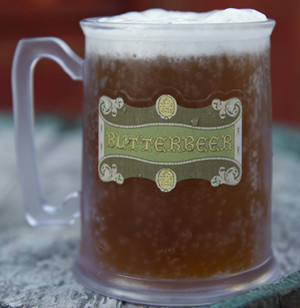 Which just thrills Chef Steven Jayson, Vice President and Corporate Executive Chef for Universal Parks & Resorts. Given that he and his team labored for nearly three years to come up with a workable real-world recipe for this magical, mythical brew.

You see, that's the real problem with this particular beverage. Though Butterbeer is repeatedly mentioned in the seven Harry Potter books and the eight HP films, the favored ale of witches & wizards everywhere doesn't actually exist. So -- in essence -- Jayson & Co. had to conjure up some Butterbeer. Deliver a drink that would appeal to hardcore Harry Potter fans as well as members of the general public. Not to mention meet the exacting standards of series creator J. K. Rowling.

The research started early. Steven and his team made a trip to Scotland in July of 2008, both to meet with Harry Potter's author as well as to tour the various environs that had allegedly inspired J.K. (which included Edinburgh's Hogs Head Pub). During that trip, Jayson reportedly quizzed Rowling in regards to Butterbeer, trying to get this author's exact thoughts on this imaginary ale.

And Steven... He has supposedly done his homework prior to meeting with J.K.. Carefully combing through all of the Harry Potter books, looking for any and all references to Butterbeer.

Mind you, given that this beverage was going to be served in a family-friendly theme park, one aspect of this beverage (i.e. according to the Harry Potter books, quaffing this ale can give you a bit of a buzz) had to be dropped right off the bat. Furthermore, because Universal Orlando wanted as many guests as possible to be able to sample this brew (and that included the lactose intolerant), there could be no butter, or dairy products of any kind, in Butterbeer.

J.K. allegedly agreed to these terms as Steven laid them out, but then added a few of her own. Chief among these was that -- because Rowling believed that corn syrup was about to become the next trans-fat (i.e. the ingredient that people now deliberately avoid whenever they're making their food choices) -- she insisted that Butterbeer be made with real sugar.

So with this info in hand, Jayson and his team returned to the States and then retreated to Universal Orlando's test kitchens. Where these would-be culinary wizards then attempted to conjure up some Butterbeer.

"This was a pretty daunting situation," Steven recalled during an interview which he gave during the Wizarding World's grand opening press event back in June of 2010. "We wanted to take what Harry Potter fans had read in the books and seen in the movies and bring it to life. We knew that people's expectations were going to be very high. What's more, we had to create a beverage that was good for all ages."

Jayson and his crew of cooks then supposedly spent three to four months trying to perfect Universal Orlando's version of Butterbeer. Company insiders told me that it took 15 to 16 tries before Steve finally got something that he was happy with.

Why 15 or 16 tries? As Jayson explained at The Wizarding World's grand opening event:

"We experimented with all sorts of flavors. It took a while to get the flavor right where it needed to be. So it wasn't too sweet. That it had this great comfortable feeling going down."

And then -- after running this prototype by his bosses at Universal Orlando and then getting their tentative approval -- it was time to see if Rowling herself would actually sign off on this version of Butterbeer. So they packed up all of the necessary ingredients ("Which was something of a challenge," Mark Woodbury, Head of Universal Creative jokingly told me at this theme-park-within-a-theme-park's opening press event, "Getting all of that stuff past the Department of Homeland Security") and then flew them over to the U.K.

Once there, Jayson and his team rented space in a kitchen in an Edinburgh hotel. To give J.K. a variety of beverages to choose from, they allegedly whipped up four variations on their Butterbeer formula along with the version that UOR officials were hoping the author would pick. Then Jayson's boss -- Richard Florell, Universal's senior vice president in charge of Food & Beverages -- carried that tray of drinks into Ms. Rowling.

And then J.K. carefully sampled all five glasses. And upon arriving at the real glass of Butterbeer, Rowling reportedly took one sip and then reportedly broke into a big smile, saying "Yes, Chef. That's it."

So Steve and his team had gotten the approval of the notoriously-hard-to-please J.K.. But what about Harry Potter's fans and the general public? Would they too respond favorably to Universal Orlando's home-brewed version of Butterbeer?

The answer to that question came during the soft opening of the Wizarding World of Harry Potter. When the line of guests standing in front of the Butterbeer cart was almost as long as the one waiting to get into the "Forbidden Journey" attraction.

But even so, Universal Orlando officials never dreamed that Butterbeer would become this popular this fast with the public. With Islands of Adventure selling its millionth mug of the stuff by January of 2011, less than seven months after this theme-park-within-a-theme-park had first opened for business.

"So what exactly is the Universal's version of Butterbeer?," you ask. That information -- as they say in the military -- is classified. On a need-to-know basis. What I can tell you is that this popular beverage is prepared on property. Beyond that, UOR officials are determined to do whatever they have to in order to keep the precise ingredients of this super-popular ale a secret. In direct response to a series of questions that I submitted to Chef Jayson about Butterbeer earlier this year, he admitted that Universal has already "...implanted special security procedures (in order) to protect the recipe."

"So -- that said -- what is actually known about this amber ale?," you query. Well, there are two distinct phases to the preparation / pouring of a glass of Butterbeer. First the bottom layer -- a slightly thickened mixture which tastes like a combination of butterscotch, cream soda and shortbread cookies -- is poured into the bottom of the glass. Then the Butterbeer's head -- which is this lighter, fluffier, less sweet version of marshmallow fluff -- is carefully placed on top of the brown brew that has previously been poured into this glass.

Now where this gets interesting is that those who have tried to smuggle glasses of Butterbeer out of Universal's Islands of Adventure (and you know who you are) have noticed that -- after a half hour or so -- this artificial ale loses cohesion. Meaning that the top layer and the bottom layer then blend together, which creates this somewhat unsightly (and -- to be blunt -- hard to drink) beverage.

Which -- to Universal Orlando's way of thinking -- is a good problem to have. Meaning that: The only place where you get a Butterbeer as it is actually intended to be served is by visiting the Wizarding World of Harry Potter.

And that's just what people are doing. Tens of thousands of them each day. Which is why -- just last week, on the official one year anniversary of the opening of this theme-park-within-a-theme-park -- Universal Orlando officials celebrated by treating everyone who was visiting Hogsmeade Village that morning to a free glass of Butterbeer.

It's also worth noting here that Universal's overwhelming success with this Harry Potter-themed drink has not gone unnoticed by the Mouse. Which is why -- when Carsland opens in the Summer of 2012 -- this new "land" will feature all sorts of Route 66-style cuisine. We're talking authentic comfort foods like macaroni-and-cheese and juicy meat sandwiches. Not to mention freshly-baked pies.

But as fun as it may actually be next summer to roll on up to Flo's V8 Café and then order some road food... I fear that Mickey may still wind up missing the mark here.

Because -- when you enter the Wizarding World of Harry Potter and then see that 20-foot barrel of Butterbeer sitting atop that beverage cart in the middle of Hogsmeade Village -- you really can't help yourself. You just have to order a glass of Butterbeer.

Which now brings me to the big question, the one that only Huffington Post readers who've actually been to this recent IOA addition can answer: Which version of Universal's Butterbeer do you prefer? The regular kind or the frozen?

For his more immediate musings on movies, TV shows, books and theme parks, please check out his blog, http://jimhillmedia.com.