Most of us already know the magical beauty of butterflies, those enchanted creatures that flutter in and out of your line of sight in the blink of an eye. The miniature creatures are wont to disappear abruptly, well before we can fully bask in their spectacular colors and patterns.

Photographer Linden Gledhill gives us the extended exposure to the winged creatures we've so long desired, allowing their magnificent features to fully sink in. Actually, Gledhill goes quite a bit further, magnifying the wings' microscopic patterns until their glittering outlines and bold hues fill up the computer screen. The enlarged wings, resembling fish scales, metallic textiles, feathered tapestries and undulating swimming pools all at once, show the immense beauty lurking in the smallest of places, if we only take the time to look. (Or employ the help of some handy microscopy.) 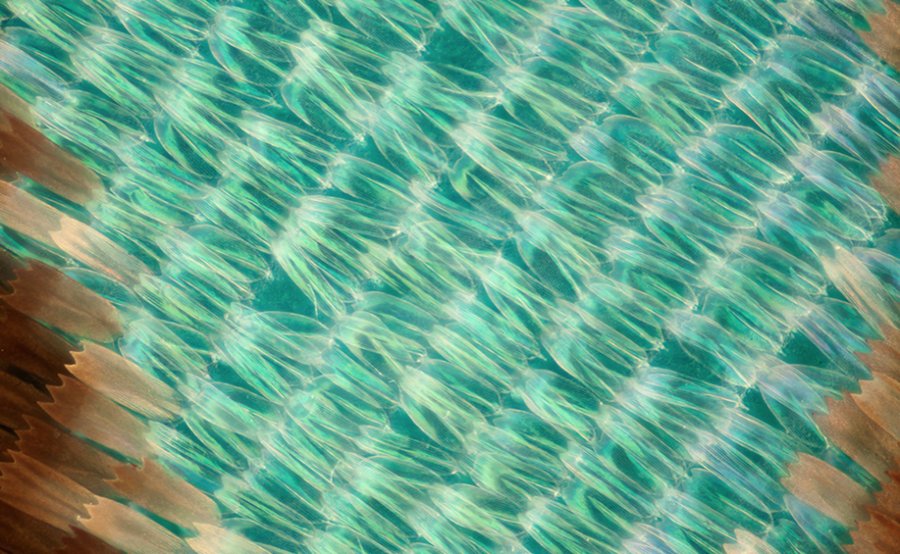 Gledhill explained his process in an email to The Huffington Post:

"Some of the earlier pictures were taken using a standard camera fitted with old microscope lenses on extension tubes. Later ones are done on an Olympus BH-2 microscope fitted with a StackShot drive. I've also fitted this microscope with LED lighting and high speed flash. The butterfly scales have a lot of depth and a microscope lens has a very shallow depth of field so this is where the Stackshot drive helps to automate the whole image taking process as it has the ability to step sequentially through very tiny steps, say two micrometers, in between each picture. It often needs 80 or so individual pictures to make up one final image using a process called focus stacking."

Gledhill also photographed a moth for his series, which, somewhat surprisingly, ended up being the crowd favorite. See the spectacular glory of the sunset moth and its butterfly companions below.