Again with the mad rush to explain. Again with the desperate need to try and figure out why an intelligent, privileged white kid from one of America's wealthiest areas, a young man with every advantage the culture has to offer, would instead deem himself sufficiently vilified and marginalized that the only obvious solution is to buy multiple semi-automatic handguns and several hundred rounds of ammunition, and calmly massacre as many people as possible. And then kill himself.

Do you think you have one? A suitable explanation, that is?

Insanity is always convenient. And popular. This was "the work of a madman," said Santa Barbara's sheriff regarding Elliot Rodger's massacre of seven people, because it sounds right, because it seems so obvious, because really, what other reason could there be? Unless you're a cop or serve in the military, anyone who ever shoots another human must be at least somewhat mentally deranged, right?

Well, no. Not at all. Despite years of therapy, Rodger reportedly had no signs of madness or even serious instability. In truth, few killers do. But the insanity claim is popular because it neatly swallows up all the other possibilities and cultural mutations, which is why gun advocates love this excuse most of all -- they're instantly off the hook, when the hook is all theirs to begin with. 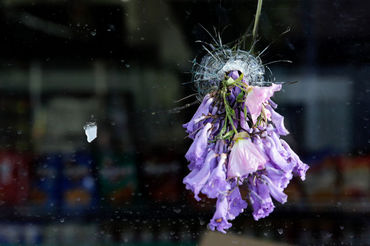 What about extreme misogyny? The feminist blogs, not to mention Twitter, are lit up with this discussion, and it's fascinating, sad and powerful all at once; most of the writers have a heart-wrenchingly valid point indeed, given how Rodger's disgustingly entitled, antagonistic attitude toward women is little different than the hostile, bitches-'n-hos, slut-shaming douchebaggery on display across much of bro culture, an undercurrent of sexism and potential violence women have to deal with every day.

Result: Women are scared. Perhaps more so than ever. Certainly far more than most men realize -- even the "good" men, the ones who feel they're being unjustly lumped in the sexist/entitlement debate. Have you followed the #YesAllWomen Twitter phenomenon? It's astonishing. No matter what kind of male you think you are, this is essential -- and humbling -- reading for all men (thanks Phil Plait at Slate for the most apt summary I've read so far).

Perhaps you prefer something less specific? Maybe you think mass shootings -- or even the "everyday" gun violence that's so common it barely registers on the media (example: three people were shot to death at Myrtle Beach in South Carolina the day after the Rodger massacre -- did you hear about that?) are always the result of a bizarre, unknowable mix of psychological and cultural forces no one can ever fully unpack.

I used to think this way, too. Sometimes I still do. But I've also come to realize this view misses the biggest, most overarching point of all.

The point is simple enough: It's the guns.

Wait, let me clarify: I don't mean the debate around access to guns, or the absurd fight over background checks, or even the failure to prevent the mentally ill from buying weapons in the first place. As pointed out everywhere, California already has the strictest laws in the land (a relative point: they're only strict by comparison to gun-worshipping states like Texas), and Rodger had no problem buying all the weaponry he wanted.

No, the larger issue is something even more nefarious, and more deeply embedded in the American (male) psyche: It's our cultural obsession with, and fetish for, guns and gun violence, our near-religious belief in firearms as salvation, cure, solution, defense, protection, the ultimate phallic symbol, the most shameful icon of American pseudo-cowboy patriotism and bogus virility.

Don't you know it already? More then 70 mass killings in the U.S. in three decades; more than a dozen in the past two years alone; an average of two mass shootings per month for the past five years; 20 children and six adults slaughtered at Sandy Hook; more than 12,000 dead (more likely twice that amount) from guns in 2013 alone, which is an average of 30 every day; upwards of 32,000 gun-related deaths every year; more than 100,000 people shot every year (including non-fatal and suicides) -- there is only one commonality: the gun.

Not just easy access to -- reliance upon, and fatal obsession with.

Put it this way: No matter his motivation, every shooter in America has concluded, in his own dark, sociopathic, or just plain stupid way, that the only way to solve his problem, to rectify the situation, to prove he's a "man," to properly "get back" at society, women, his boss, the world, is to buy a firearm and start shooting.

It's a distinctly male credo, too:...