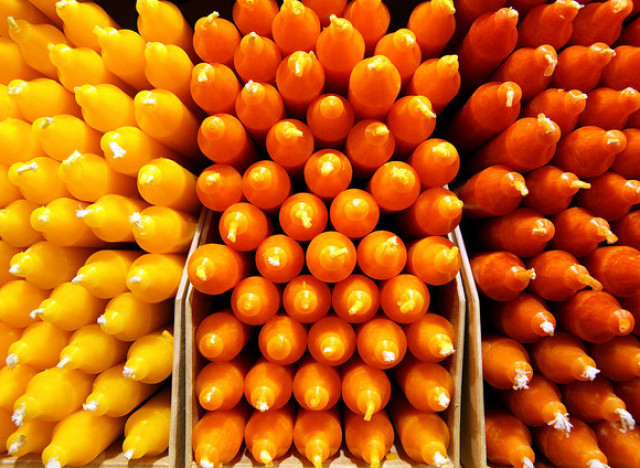 Let's be honest: Shopping for candles is a fairly thoughtless task. If we do spend more than 3 seconds mulling over whether to buy one candle over another, it's mainly for scent reasons. But whether it was a taper that dripped all over the table or a pillar that burned so unevenly that you'd think it was placed at a 90 degree angle, we've all gotten ripped off in this department. And even if it's a question of $5, it's $5 more than we'd like to lose on a purchase.

It doesn't have to be that way. These tried-and-true simple shopping tips will reliably guide you to a quality candle…at any price point.

- Go for soy. We never thought it made a difference (except in price tag) whether a candle was made of soy versus paraffin--until we found out that paraffin candles can emit toxic chemicals like toluene and benzene. Also, soy wax burns more evenly than paraffin candles. Soy candles have become more affordable over the years, but your options tend to be limited to jarred candles (since 100% soy wax is far softer than paraffin). We think that it's okay to use a soy-blend, which will still burn cleaner (in every sense of the word) than pure paraffin.

- Want a drip-free candle? Try beeswax. We've swapped our standard formal tapers years ago for beeswax ones and haven't looked back since. Beeswax, on average, burns twice as slowly as paraffin wax. Plus, it doesn't drip all over the place as the candle burns. The only downside is that it can smell a bit like honey.

- The wick matters. The highest-quality candles use a braided cotton wick, instead of the kind that have a wire woven into the wick. Cotton wicks burn evenly (and slowly), don't require regular trimming and won't smoke as much as a wiry wick.

- Don't fall for old-timey jars. Apothecary-style jars (where the neck is smaller than the rest of the jar) tend to get sooty, since the thinner neck doesn't allow air to circulate sufficiently around the wick.

- Avoid dark colors. A high pigment content can keep the wick from absorbing the wax, which feeds the flame. This increases the likelihood of drips.

Looking to add some more candles to your collection? Check out these great (editor tried-and-true) options...