Astronaut Buzz Aldrin weighed in on the controversy surrounding a new movie about his 1969 moon landing that does not feature the planting of an American flag on the lunar surface.

Aldrin didn’t actually say anything about the debate that’s erupted over “First Man,” the biopic about Neil Armstrong, the first human to ever set foot on the moon. But Aldrin did tweet two photos of himself on the moon — each with the American flag — and several telling hashtags:

The dustup began last week after the movie’s premiere at the Venice Film Festival. “First Man” does not show the moment when Armstrong planted the American flag. It does, however, include several scenes of the flag on the moon.

“The flag being physically planted into the surface is one of several moments of the Apollo 11 lunar EVA that I chose not to focus upon,” director Damien Chazelle said in a statement.

Ryan Gosling, who stars in the film, defended the decision, saying the moon landing “transcended countries and borders.” The actor said he believed the moon landing was widely regarded as a human achievement, not just an American accomplishment.

When Armstrong set foot on the moon in 1969, he also noted: “That’s one small step for man, one giant leap for mankind.”

Although Armstrong died in 2012, his sons, Rick and Mark, spoke out in support of the new film and said it was not anti-American.

“There are numerous shots of the American flag on the moon,” they said in a statement. “The filmmakers chose to focus on Neil looking back at the earth, his walk to Little West Crater [and] his unique personal experience of completing this journey, a journey that has seen so many incredible highs and devastating lows.” 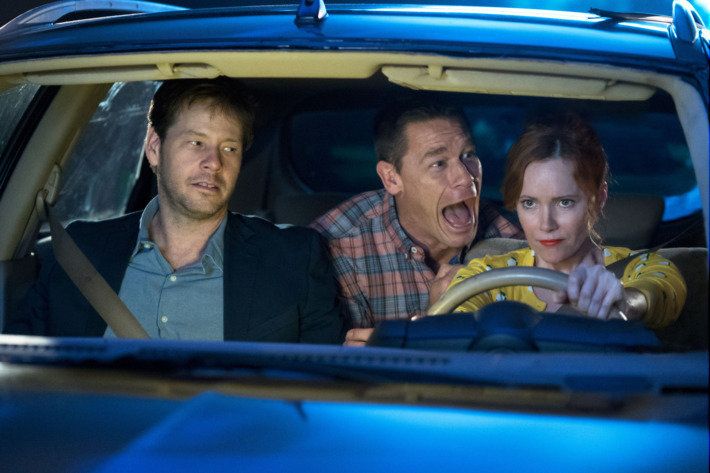 1 / 15
"Blockers"
Which of 2018's tomfoolery-riddled comedies is right for you?&nbsp;You could pick&nbsp;"<a href="https://www.huffpost.com/entry/game-night-action-screwball-romp_n_5a8af746e4b05c2bcacdd451" target="_blank">Game Night</a>," "I Feel Pretty," "Life of the Party," "Overboard" or "<a href="https://www.huffpost.com/entry/give-us-photos-jeremy-renner-cgi-arms-from-tag_n_5b16e6fae4b0734a99384177?mwo" target="_blank">Tag</a>," but you'd be wrong. The answer is "Blockers," Kay Cannon's well-calibrated lark about three parents trying to stop their&nbsp;college-bound teenagers from&nbsp;losing their virginity on prom night. No lengths are too extreme, including butt-chugging beer.&nbsp;It's what Vin Diesel would do, right?
Universal Pictures