Many developing countries have fairly good environmental laws against deforestation and to protect threatened species, such as orangutans. However, environmental crimes are often not prosecuted.A key example is Indonesia's Tripa peat swamp forest, which from 2007 was actively cleared by oil palm companies in direct violation of federal environmental laws.

Recent lawsuits by international and local activists aim to put a stop to it. Yet it's a tough fight. Though several companies were found guilty in the courts, fined and ordered to restore portions of Tripa's forests, the Aceh provincial government has created a new land use plan that ignores federal deforestation protections. 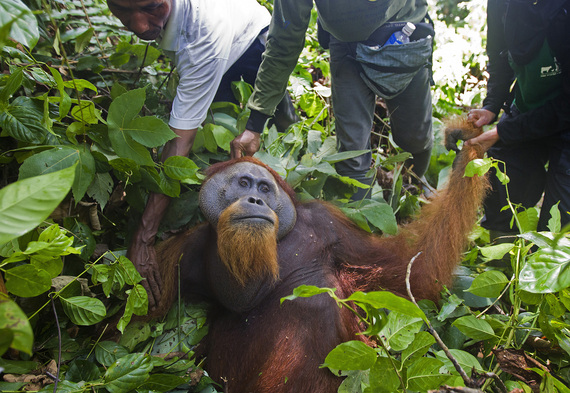 A large male orangutan is rescued and relocated after his home forest was destroyed for oil palm expansion in the Tripa peat swamp. Photo by Paul Hilton

With their high daily temperatures and steamy 90 percent humidity, these lush dense forests teem with life -- from the last viable populations of Sumatran tigers, to herds of Sumatran elephants, plus rhinos, sun bears, clouded leopards and of course, orangutans.

But the Tripa peat swamp forest, he says, is so badly damaged today that it is no longer heaven for the great apes.

For many, like Rahul, it has become a living hell. The infant orangutan was orphaned when captured by an oil palm plantation worker, and brought to the man's shop at the edge of the Tripa forest. That's where SOCP rescuers found the two-year-old in April 2012 -- malnourished and with wounds on his leg from trying to bite and scratch free of the rope that confined him.

It's a common story. The Tripa swamp forests, located on the coast of northwest Aceh province in Sumatra's Leuser Ecosystem, are home to the world's densest population of Sumatran orangutans. It's also the epicenter of a series of legal battles aimed at stopping agribusiness from undermining this critical ape habitat.

As recently as the late 1980s, Tripa was covered by 60,000 hectares (232 square miles) of primary peat swamp forest and home to at least 3,000 orangutans, according to the Arcus Foundation's State of the Apes 2015 report. But it didn't stay that way. 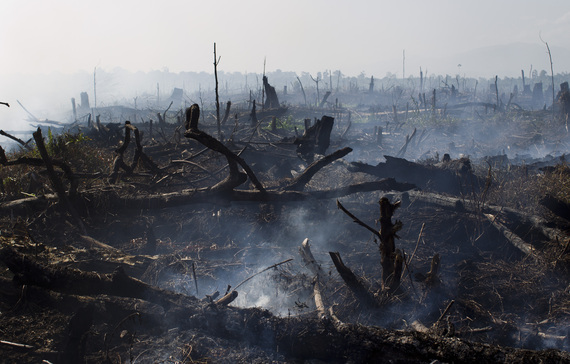 The problems began with legal maneuvering by the Indonesian government when it reclassified Tripa from "National Forest Estate" to "APL" -- an acronym for areal penggunaan lain, meaning "Land for Other Uses." That switch paved the way for rapid agro industry development.

During the 1990s, Tripa was carved up into concessions destined for oil palm plantations, according to Tripa Truths, prepared for a local NGO, Tim Koalisi Penyelematan Rawa Tripa (TKPRT). Five companies took advantage and soon cleared about half, 30,000 hectares (116 square miles), before civil war broke out in Aceh and forced the firms to halt operations. With clearing suspended, the land started to regenerate.

When hostilities ceased in 2005, the companies moved back in. Then three years later, the federal government reconsidered its previous classification and declared the Leuser Ecosystem a National Strategic Area due to the peat swamps' and forests' contribution to vital environmental services -- providing protection from climate change with their carbon storage, and protection from floods and drought as a critical watershed. That designation prohibited any land use in the Leuser Ecosystem that interferes with the goal of environmental protection.

That prohibition, however, was ignored, and logging of primary forest and the conversion of peat swamps persisted. Between mid-2007 and the end of 2009 the palm oil companies cleared almost 8,000 hectares (31 square miles) of Tripa's remaining forests. Conservation NGOs stepped in and tried to stop the clearing, but their protests fell on deaf ears. That is, until they changed tactics in 2011 and challenged the land conversion in court -- a groundbreaking strategy.

The Tripa case demonstrated how international pressure and court actions could be combined to successfully enforce existing environmental laws.

"These legal cases are a wake up call that companies are accountable for their actions," says Rainforest Action Network's Chelsea Matthews. "Burning to clear forests and peatlands is illegal in Indonesia, but the problem is the law is seldom enforced. There is a clear culture of impunity and the Tripa legal victories bring about long-awaited justice for the destruction of one of Indonesia's most valuable natural resources."

"They set an historic precedent that is needed to save the Leuser Ecosystem from continued destruction," she concludes. "In a country where the destruction of rainforests for palm oil plantations is rampant and where corruption and illegal expansion is often considered the norm, the Tripa legal cases are significant because they represent a stark break in business as usual."

To learn more on these legal cases, please read the full article on Mongabay.com, titled Tripa's Trials: protecting key orangutan habitat through the courts. This article is an excerpt and published with permission.