The scale of the crisis is, in a word, staggering.

Here are seven charts (and another that was borrowed from the Wall Street Journal) along with some facts and figures that will help sketch out the scope of the problem. The numbers that follow are most likely understated, if anything, because we've left out some forms of reduced spending (like that which takes place when homeowners who have paid off their mortgages lose home value.)

The budget cutters push the idea that there's a dichotomy between the heart and the brain, and that they're on the "brain" side. But the numbers don't lie: Ignoring the foreclosure crisis is both heartless and brainless.

How big is the mortgage crisis? Pick an adjective: astronomic, colossal, enormous, gigantic, ginormous, humongous, jumbo, mammoth, massive, monstrous, mastadonic, monumental, prodigious, tremendous, vast, very big, very large, whopping. Here's how big it is. Let's assume that you're reading these words one day after I wrote them. That means that:

By the time you read this, there will have been approximately 8,500 foreclosure actions in this country -- more than one thousand every hour during the working day.

By the time you read this, homes in the United States will have lost more than $13 million dollars in value. During a 24-hour day, this figure comes out to more than $500,000 an hour.

By the time you read this, homeowners will have paid $750 million in mortgage payments for non-existent housing value -- that is, the amount on their mortgages that disappeared when the bubble burst -- according to our estimate.

By the time you read this, the nation's bankers will have earned nearly $400 million, of which $56 million will be bonus money. Bankers like to say they work 24/7. (They don't, but let's say they did.) That means they will have collectively earned more than $16 million in salary and more than $2 million in bonuses during each and every one of the 24 hours hours before you read these words -- morning, noon, and night.

And all of these figures for the last 24 hours will be reached again during the next 24.

Federal Spending vs. the Mortgage Crisis

How do the deficit and the mortgage crisis compare economically? 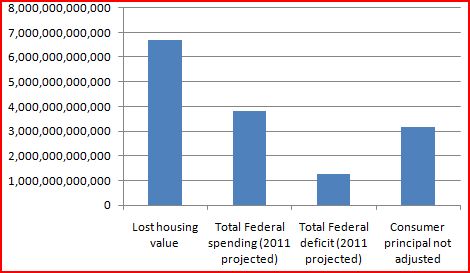 Here's a fact for you: The amount of wealth American homeowners have lost over the least three years is much larger than this year's entire Federal budget.

Even our conservative estimate shows that the debt that homeowners are paying off to the banks for no-longer-existing home value -- "money for nothing" -- is greater than the entire projected Federal deficit for 2011.

Those figures could be a little misleading, since they compare a multi-year problem with a single year's Federal budget. So let's look at the mortgage crisis and its impact on 2011. This year's estimated "money for nothing" payments dwarf the annual spending cuts that Washington's fighting over right now: 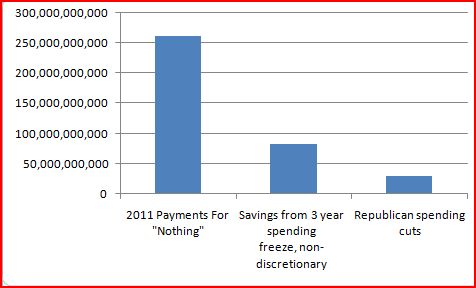 They're greater than this year's projected savings from the president's spending freeze, and much greater than the $30 billion in additional spending cuts which House Republicans initially demanded (and which they're likely to get.)

What is the "Homeowner Bank Bailout"?

The first column represents my quite rough (but very conservative) estimate of the payments that consumers will make to banks in 2011 for home value that's evaporated. That's money to repay loans which banks often knew were likely to go bad when they issued. (If they didn't know, they should have.) After their generous bailout (which was must costlier than has been acknowledged), the banks are still collecting payments for that portion of the loan that covers assets which no longer "exist."

That amounts to an additional, invisible annual bailout every year for the US banking industry, funded by some of the people who can least afford it: struggling homeowners. (This figure doesn't even include people who've been foreclosed upon, which means the bank got to keep everything they'd paid into the house -- and got the house, too.)

The "homeowner deficit" is strangling the country as the financial sector drains money from the overall economy for its own non-productive coffers. This chart illustrates that by showing that banks are once again grabbing an unhealthy share of our national wealth: 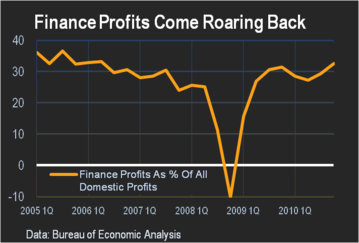 Without this drain, homeowners would be pumping hundreds of billions of dollars into the economy every year. Now that would be a stimulus.

Instead of addressing the mortgage crisis, politicians (and the journalists who love them) are fixated on entitlement programs. How much sense does that make in dollars-and-cents terms? 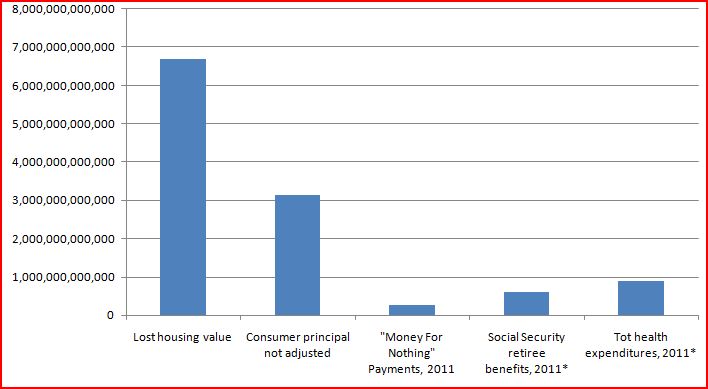 The Best Stimulus: Homeowners or Corporations?

What's the best way to stimulate the economy: By giving corporations tax breaks and regulatory relief, or by fixing the housing crisis? Both political parties are turning themselves inside out trying to please corporations -- partly, they say, because reports say those corporations are sitting on nearly $2 trillion in cash. If we make the CEO's of those corporations "feel better," the argument goes, they'll cut some of that cash loose for hiring and investment and the economy will pick up. 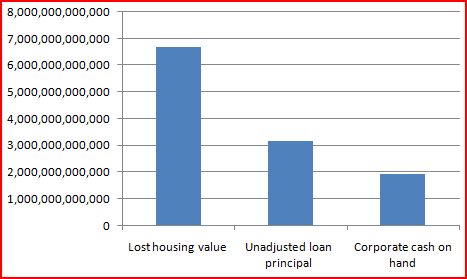 Those corporations won't really cut that cash loose until they know there are customers waiting to buy their products. There's a great way to make that happen: by helping consumers (more than 20 million households altogether) escape the burden of all this underwater debt.

The Administration's response to this crisis has been woefully inadequate... and the Republicans are much worse than that. The GOP's hard at work trying to end any assistance for underwater homeowners.

Administration programs were insufficient by design and then failed to meet even their own, overly modest goals. The HAMP program, for example, was never intended to help all of the homeowners who are still paying underwater mortgages. It should have been. Here's how limited its goals were, when compared to the problem: 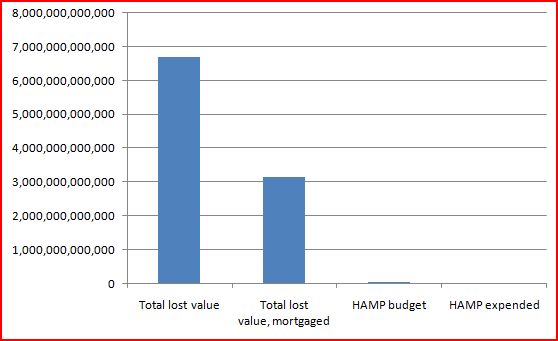 But even when compared to the number of homeowners facing foreclosure, it's been a failure: 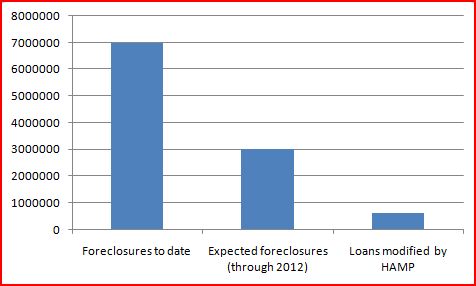 It hasn't even spent more than a tiny fraction the money allocated to it! 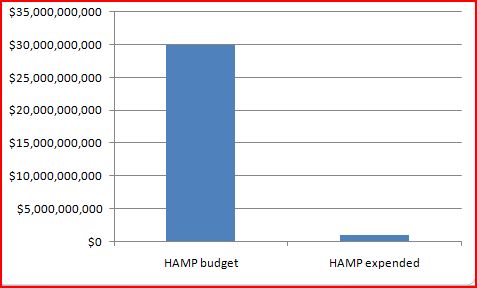 And yet, incredibly, Republicans want to cut it. And the GOP's Congressional leaders also want to kill several other programs for struggling homeowners, including a principal relief program that might help some of the 14 million underwater homeowners who haven't yet missed a payment.

Despite the magnitude of the mortgage crisis, all we've been hearing out of Washington is endless chatter about "deficit emergencies," the need for so-called "entitlement reform" (aka cuts), and the supposed "financial Armageddon" that faces us. [7] We've heard almost nothing about the crisis that is ruining millions of lives, costing us millions of jobs, and strangling the economy.

And by the time you read this, that won't have changed.

1 - Based on February's rate of foreclosures, rounded down to be make the estimate conservative. Foreclosure actions are defined as foreclosure filings and the sale of foreclosed homes.

2 - Based on January's price decline of 2.5% in total value, divided by a 30-day month, using an estimated total residential real estate value of $16.3 trillion that was derived from Federal Reserve data.

3 - A very rough estimate. Assumes that roughly half of the total housing value lost in the bubble is included in mortgage principal that's still being paid off (as opposed to foreclosures, etc.) This figure was derived from that amount, plus a rough calculation of the interest being paid and some assumptions about the remaining lifetime of the loan.

5 - It's a critical battle, of course - especially to the people who are counting on the government to serve its function in time of need. This piece addresses our warped financial perspective, not the very vital role government plays in our lives. That should not be in question (although it is).

6 - But wait, as the ads say: There's more. These homeowners can't refinance, either, because they don't have collateral (the houses aren't worth as much as the new loan). Alll the "quantitative easing" in the world won't touch them. So the banks are borrowing money cheaply and collecting it from these struggling borrowers at higher rates. [6]

7 - Nobody disagrees that it will be important to address the the Federal deficit over the long term, and Social Security's funding issues will need to be addressed before 2037, when the program will only be able to fund 75% of its planned benefits. (Any plan that cuts those benefits below that amount, or cuts them by that amount even before 2037, is a hoax designed to raid the money that working Americans set aside for that program.)

This post was produced as part of the Curbing Wall Street project and the Strengthen Social Security campaign.

Richard (RJ) Eskow, a consultant and writer (and former insurance/finance executive), is a Senior Fellow with the Campaign for America's Future. This post was produced as part of the Curbing Wall Street project and the Strengthen Social Security campaign. Richard also blogs at A Night Light.