Given that -- this past weekend -- The Good Dinosaur was once again the No. 1 family film at the box office, there are a lot of parents on the prowl right now for toys that draw their inspiration from this new Pixar Animation Studios production

And as luck would have it, there's a good number of Good Dinosaur-related playthings on the market right now. The Disney Store -- for example -- has a Jack the Ankylosaurus action figure which features swinging tail action ... 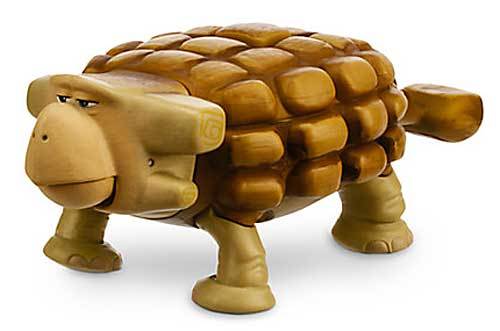 ... while over at Amazon, you can choose between Mary Alice the Stegosaurus ... 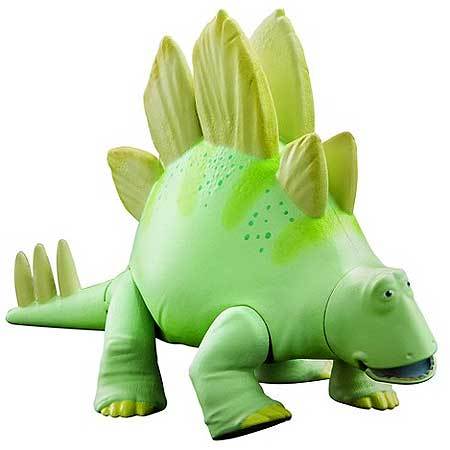 ... and Will the Triceratops. 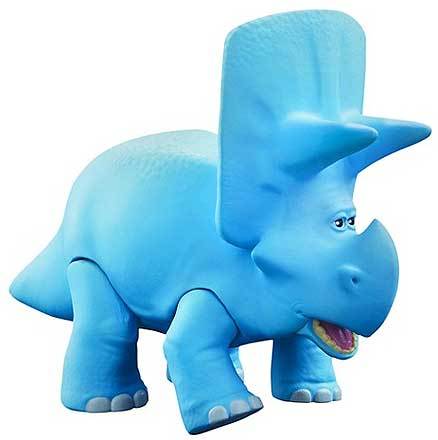 Mind you, if your child really is a Good Dinosaur fan, they're certainly going to be surprised if they find Jack, Mary Alice and/or Will under the tree. Mostly because these three characters didn't actually appear in that Peter Sohn film.

"And why is that?," you ask. It has a lot to do with the way The Good Dinosaur was retooled after Pixar veteran Bob Peterson was pulled off of this project back in the Summer of 2013. You see, Bob was the guy who initially came up with the Big "What If" that drove this movie's story. As in: What if the asteroid that wiped out the dinosaurs had actually missed Earth?

You see, Bob put a very personal spin on The Good Dinosaur. Given that he had grown up in Ohio's Amish Country ... Well, that's how Peterson thought the dinosaurs would have evolved after another 65 million years on this planet. They would have eventually become this Amish-inspired agrarian society where all of the farmers worked together for the collective good. 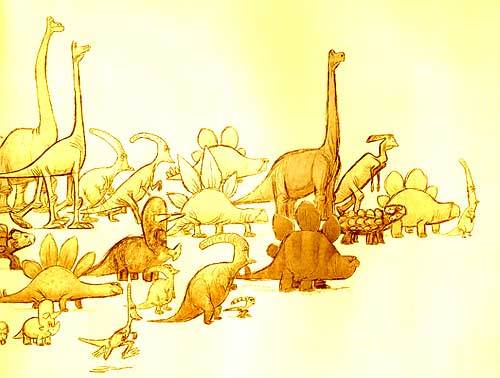 That sounds like a well-ordered world, don't you think? One that could perhaps have been tipped on its ear one day if one young apatosaurus farmer decided to do something different. Like -- say -- instead of automatically killing all of the bugs that regularly attack their crops in the field, studying these insects instead.

This is what Arlo was supposed to be doing as the original version of The Good Dinosaur's storyline was unfolding. This is why -- if you look closely at the very first poster for this Pixar film -- you'll see two giant bugs. 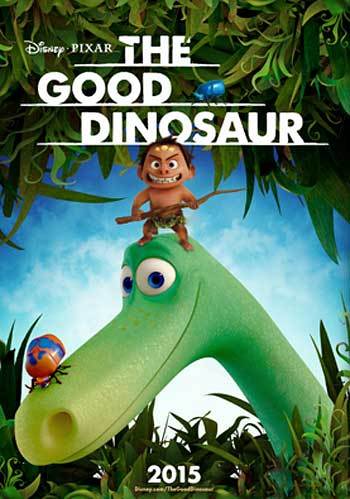 And speaking of giant ... Take a look at Arlo's enormous puss. Why does this early version of The Good Dinosaur's title character have such a long face? Because Bob Peterson envisioned this apatosaur not as an 11 year-old who gets lost in the wilderness. But -- rather -- as a man-child in his late teens / early 20s. A literally big-hearted lug who longs to abandon his rigid role on the farm and perhaps do something different with his life. Like -- say -- go off on an adventure.

"And what was supposed to send Arlo off on this adventure?," you query. You remember those large insects that this Good Dinosaur has been studying when he should have been protecting all of those crops? One day, Arlo notices that one of these bugs isn't actually an insect. But -- rather -- a boy who's crafted a crude disguise for himself that then makes this small human look like a bug.

Because of the little three spots that this boy has painted on his forehead (which are supposed to mirror / mimic the spots that he sees on all of the enormous insects that are attacking the crops which the dinosaurs have planted) ... Well, that's why Arlo winds up calling this small human Spot. 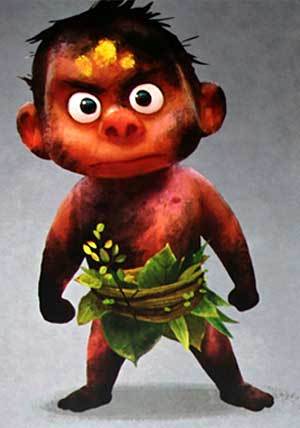 There were a lot of intriguing story ideas & character concepts like this that can only be found in Bob Peterson's version of The Good Dinosaur. The only problem was that all of these elements never coalesced into a single emotionally satisfying / overall entertaining storyline. And as The Good Dinosaur's original release date of May 30, 2014 drew closer & closer and Pixar's story trust had yet to come up with a third act for this film that actually worked, something obviously had to be done.

"I came onboard this project in June of 2013. Shortly after that, Pete (Sohn, Bob Peterson's original co-director on The Good Dinosaur) took over the story," Ream recalled in an interview with the Huffington Post. "We just shut the production down. And it was the hardest professional thing that I've ever done. But when you're swirling in the story murk, you have to do something. And Peter ... While he still wanted to honor the world and the characters that Bob had originally created for this project, he also wanted to tell a far simpler story." 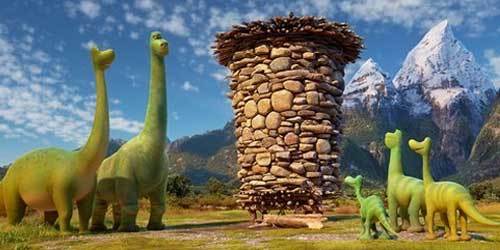 So rather than make a movie that showed how ankylosaurs, apatosaurs, parasaurolophuses, stegosauruses & triceratops came together to form an Amish-inspired farming community, Sohn & Ream decided instead to focus on a single family of apatosauruses. Not only that, but Peter & Denise decided to pare back Arlo's family. Reducing his number of siblings from two brothers & a sister to just a brother & a sister.

And speaking of paring things back, given that the character of Arlo (as Bob Peterson originally envisioned him, anyway) had been this 70 foot-tall man-child ... Well, that then made it challenging for Pixar's artists to stage scenes where this apatosaurus could then connect with a 3 foot-tall human boy. Which is why Sohn & Ream opted to not only reduce Arlo to 15 feet in height, they also reduced this character's age as well. Making him just 11 years-old when Arlo & Spot (SPOILER ALERT AHEAD) wind up getting swept downstream and then have to join forces if they're to survive their time in the wilderness. 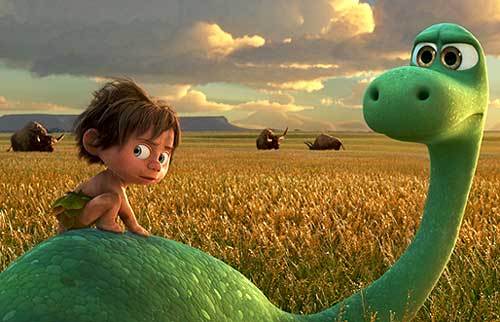 "And when we pitched this new, simpler story featuring a far younger version of Arlo, John Lasseter said 'This is great.' But he then warned Denise and I -- if we were to go ahead with this version of The Good Dinosaur -- that we'd really have to bring these characters and the world that they live in to life. Because with this simple a story, you can't hide behind the plot. Which is a very vulnerable place to be when you're a filmmaker," Sohn recalled.

"And I have to tell you that -- on the day that we pitched John & the Pixar Brain Trust the new simple version of The Good Dinosaur and they totally got on board with that idea -- I went into the bathroom and wept. Because I so desperately wanted to make a movie like this. One where it was going to be the smaller, more character-driven moments that wound up having the biggest impact on the audience," Ream concluded.

Changing apatosaurs in mid-stream like this was obviously an enormous gamble. Thankfully, it was one that paid off in the end, given that the critics wound up raving about The Good Dinosaur. With Joe Morgenstern of the Wall Street Journal saying that this Peter Sohn film was " ... heartfelt and endearing, as well as visually splendiferous" while Sandy Schaefer of Screen Rant stated that this new animated feature " ... boasts a touching story and gorgeous animation."

Now as for Bob Peterson ... Look, this wasn't this Pixar veteran's first walk in Jurassic Park. Given that Bob had worked on the story team for the story team for such challenging projects as A Bug's Life & Toy Story 2 (Not to mention being the story supervisor on "Monsters, Inc."), he already knew how tough creating a new full length animated feature could be. Which is why -- rather than exiting the Emeryville operation after being taken off of The Good Dinosaur -- Peterson just sucked it up and then moved on to his next assignment at that animation studio. Which was helping to craft a satisfying story for Finding Dory, the long-awaited sequel to Pixar's 2003 hit, Finding Nemo.

Which, as it turns out, has proven to be a far tougher nut to crack than anyone had ever anticipated. Thanks -- in large part -- to SeaWorld's Blackfish problem and how that controversial documentary has helped reshape the public's perception of how animals should be treated in captivity. But we'll get to the behind-the-scenes stories associated with this new Andrew Stanton movie in a future Huffington Post article. 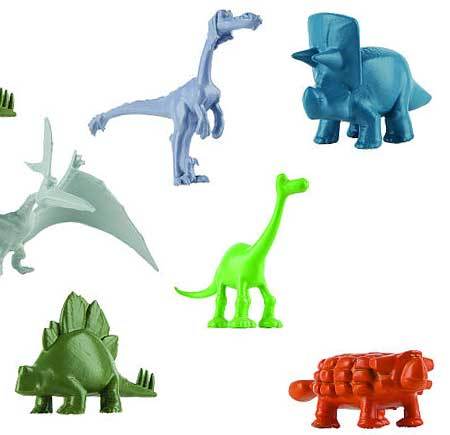 But for now, those of you who are curious about what Bob Peterson's The Good Dinosaur would have been like at least have this handful of toys to check out. I mean, it's not like all evidence of the earlier version of this new Pixar Animation Studios film has been wiped from the planet, has gone entirely extinct.