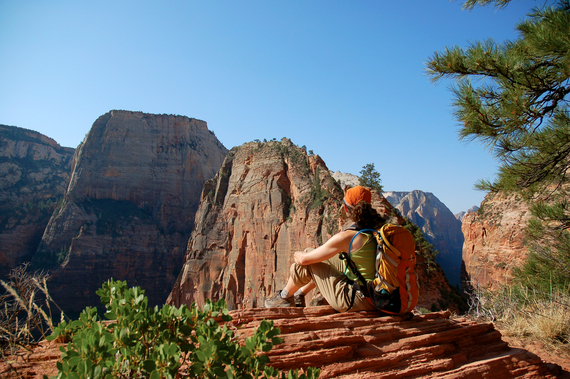 Spring is here, at least according the calendar -- time to come out from underneath at least a few of those layers. Perhaps you overdid it a little with the hibernating this past winter -- maybe you took up carbs as a hobby, or attempted the world record for most binge-watching of things on Netflix of all time. Kudos to you, really, gold star, but now it's time to consider getting back into fighting shape for the inevitable warmer weather ahead. Run up a mountain or slip into a restorative mineral bath, it's all good -- here are a few choice ways to get your head back in the game.

#1 Take the waters in Santa Fe
A Japanese-style hot springs resort isn't the first thing most people come looking for in New Mexico's capital city, but Ten Thousand Waves is actually one of the Southwest's most unique spas, not to mention one of the country's best spa deals. Rates begin at $24.30 for a communal baths pass -- not much for a day of rest and relaxation, though that's obviously just the beginning -- you can book private tub time, a full range of treatments or even spend the night -- rates currently begin at $209. (tenthousandwaves.com)

#2 Get your heart rate up at Zion National Park
It's only two and a half miles on foot to the summit of Angel's Landing, the most famous spot at this iconic Utah national park. Except that this will likely be two and a half of the most trying miles most people will ever hike, thanks in part to the 1,500-foot increase in elevation, but mostly because of the last half-mile along a notoriously narrow and steep razorback ridge, where chains help climbers keep their balance as they navigate the often breathtakingly treacherous terrain. The payoff is immense -- this is one of the most beautiful viewpoints in the park, if not the West, with giant views of the canyon that is the focal point of the park. And then you have to figure out how you're going to get back down. (nps.gov/zion)

#3 Watch the ice melt on Lake Superior
The next-level scenery of Michigan's Pictured Rocks National Lakeshore is for most people a summertime kind of thing. But on a sunny (if chilly) day in the springtime, a solitary and invigorating hike on the park's miles of lake-hugging trail can be an unforgettable experience - providing there are no late-season blizzards in the forecast, anyway. From breathtaking dune climbs to strolls through silent stands of evergreens, past frozen waterfalls and along the park's famed colorful cliffs, there's a stunning variety of scenery here, no matter how long winter decides to hang around. (nps.gov/piro)

#4 Work those glutes in Texas' own Grand Canyon
The second largest canyon in the United States isn't nearly as famous as the first, but most Texans who've seen it figure that Palo Duro Canyon ought to be. About half the length of the Grand Canyon but still plenty impressive, this state park located up on the Panhandle and not far from Amarillo, is known for its fascinating natural rock towers, known as hoodoos. Within park boundaries are 120 miles of varied trail to explore, providing plenty of opportunities for both scenery and solitude. Historic stone cabins, built by the Civilian Conservation Corps in the 1930s, are the place to stay. (palodurocanyon.com)

#5 Soak it like George Washington in West Virginia
Our first president used to take the waters in the historic spa town of Berkeley Springs, West Virginia, and the stone bath he favored still sits at the heart of town. It's right next to the state-run mineral baths, which provide a no-frills and fun introduction to this unusual and artistic community, located just south of the Potomac River (and somewhat under the radar, even while being just a short drive from Washington, DC.) After your soak, head around the corner to the homey Atasia Spa for a little table time with some of the best therapists in town. (berkeleysprings.com)

#6 Go for a walk on Florida's wild side
Not far from old St. Augustine, the nearly 9,000-acre Etoniah Creek State Forest is one of the Sunshine State's most rugged places, home to black bears, wild turkeys, bobcats and lots of other creatures to keep your eyes peeled for. Miles of trails run through the forest lands along several scenic streams - if you are looking to get away from it all, start here. Primitive campsites are available, should you feel like extending your stay. (freshfromflorida.com)

#7 Bathe in local history in Indiana
Travelers have been coming to the hills of Southern Indiana to take the region's mineral waters for more than a century. In the twin towns of French Lick and West Baden Springs, two eponymous resorts continue to serve those in search of a cure - and in search of a relaxing weekend. The whimsical architecture of both hotels, which comprise what was once known as the "Carlsbad of America," is half-worth the trip itself, but don't get too distracted from your original intent - to hop in the tub at either of the resort spas for a long soak in waters that back in the area's earliest days were prized for their healthful properties. (visitfrenchlickwestbaden.com)

#8 Hit the beach in Maryland
Assateague Island is much more than just a place to get a tan in July. This wild, windy National Seashore south of bawdy Ocean City offers early spring visitors an endless amount of space in which to move, not to mention plenty of opportunities to glimpse the island's famed wild ponies. Whether you do a multi-day beach hike and camp behind the dunes, or simply stop in for a quick hit of solitude (and salty sea air), stop in at the year-round visitors center for a primer on the best activities during your stay. (nps.gov/asis)

#9 Put pedal to the metal in New Orleans
While the far north contemplates the most tentative of moves towards springtime, New Orleans has already lept into the prettiest season, feet first. It's the perfect time of year for a vigorous cycling adventure through the Big Easy's bucolic backstreets -- sign up for a guided tour with the Confederacy of Cruisers, a justly popular local outfitter that leads low-key and informative tours out of the French Quarter and into a New Orleans many visitors will never see, the poor things. (confederacyofcruisers.com)

#10 Hop in the tub in Arkansas
The city of Hot Springs, Arkansas may have fallen out of fashion quite dramatically since its historic heyday, but the waters still flow freely from the hills above the town's historic Bathhouse Row. With multiple options to choose from, it can be difficult to know where to start -- the answer is Quapaw Baths & Spa, for a long soak in the naturally heated, mineral-rich waters, followed by your choice of affordable spa treatments. (quapawbaths.com)

For the lowest fares available to these destinations right now, click here.

12 places to inspire your inner gardener this spring
10 reasons New York (the state, not the city) belongs in your travel plans this year
10 reasons why you're going to love Tokyo