"At home, we didn't call it soul food, we called it dinner," says food historian and author Jessica Harris, one of the roughly 100 people interviewed for Byron Hurt's "Soul Food Junkies," airing on PBS next month.

Her sentiments represent not only the ubiquitous nature of dishes like mac' and cheese, collard greens and salt pork in African-American homes, but the special place they hold in hearts as well.

However, is soul food's grip on our eating habits unhealthy? And just how did this comforting southern fare turn into "soul food" anyway? Documentary filmmaker Byron Hurt set out to find out.

Hurt talked with The Huffington Post about some of the answers he uncovered and the personal loss that inspired his quest along the way.

Where did production of this film begin?

I was putting the finishing touches on my previous film, “Hip Hop: Beyond Beats & Rhymes,” back in 2004 when I got the phone call from my mother that there were some problems with my father’s health. I took some time off to help my father recover and to make it through his chemo treatments and also trying to help him change his diet and his nutrition.

That was when I first started to see how difficult it was for him to fully commit to changes, especially with some of the traditional soul food dishes, and that’s when I decided that it would be quite interesting to make a film about black people and our connection to soul food and food in general.

It was around 2006 when I decided to actually make the film and I didn’t receive funding until 2008. I started shooting in June 2009.

This is a pretty vast topic. How did you begin to tackle all of the questions you pose at the beginning of the film?

At the outset, I did a lot of reading about the history of soul food. One of the first books that I purchased was Frederick Douglass Opie’s “Hog & Hominy” and I read [it] from cover to cover. I reached out to Mr. Opie and I had a conversation with him and he gave me a lot of leads as to who I should talk to and consider including in the film. I spent about a year reading and talking to different people before I started shooting and I continued to do additional research throughout the production process.

You talk quite a bit in the film about what your fondest memories were with soul food growing up, and the change in mindset that you had during college. What is your relationship with soul food like now?

It was an evolution for me and I’m still sort of evolving as we speak. [Now] I eat what I consider to be soul food. This morning I had a kale smoothie for breakfast. Kale is a part of the soul food tradition. I eat kale salads as opposed to cooking my kale to death for hours at a time. I tend to eat things that are as close to raw as possible and occasionally I will eat soul food. I don’t have a problem with eating soul food, I just eat it rarely. And I don’t eat meat or pork. Very rarely will I eat chicken or turkey these days. I have a mostly vegetable-based diet at this point.

At the end of the film, you don’t denounce soul food necessarily, so this is a pretty extreme departure from what you used to eat, isn’t it?

It’s really difficult for people to change their eating habits. It’s daunting. You have to just start where you are, and you have to make small changes, which is what I’ve done over a long period of time -- we’re talking about 20 years. What I eat now may seem extreme versus what I ate 20 and 25 years ago, but it’s not extreme if you make incremental changes.

The takeaway for me is that we have to figure out ways to modify the way that we’re preparing our food and be a lot more conscious about what it is that we put into our bodies and the kind of access we have to food in our communities.

I’m not condemning the black culinary tradition, because it has served us well over the years, throughout slavery. It helped us survive. But I think we’ve come to a point where have to realize that we have to make a lot of changes in order to lead healthier, longer lives and have a quality of life.

So the goal isn’t to move away from traditional soul food altogether? Or is it?

The goal is to remix soul food, to modify it to where we can still enjoy many of the core ingredients without cooking it in a lot of fat and grease and salt and meat and those sort of things.

Are these traditions and eating habits perpetuated by peer pressure?

I think people need to see more examples of people who are eating healthy and making good choices in terms of food. I think there’s a lot of social pressure within families to conform to whatever the culinary tradition is of that family. It’s very difficult to break free of the kind of food your grandmother prepared. That kind of social pressure is very real and I saw that myself this Thanksgiving.

You mention that soul food helped many African-Americans survive slavery. What about all of the businesses that have helped black neighborhoods survive for generations after that? What happens to them if people move toward healthier alternatives to the comfort food or reinvented it in a way that isn’t as appealing?

There are examples of soul food restaurants across the country that have taken a more healthy approach, that continue to thrive and do well because the food tastes good. I think it’s just reinventing soul food in a way that people can identify with it, but still receive some health benefits from it as well.

So how did southern food become soul food?

From what I understand and based on my research in the film, soul food and southern food are essentially one in the same in that soul food was a term coined in the late 60s, early 70s during the Black Power movement. [It was] in a way reclaiming our culinary traditions and history and linkage to a larger social justice movement. But essentially, southern food is what black folks ate and served other folks for dinner.

There seems to be a noticeable shift between even 2006 (when you started the film) and now, in terms of how people eat, and their overall consciousness about health and wellness. Do you think we’re making some headway?

I agree that we’re in the middle of a movement, a cultural shift in terms of people’s awareness about how food impacts our lives and our communities. There’s a burgeoning food justice movement that is doing a lot of work around the country to educate people on how to eat better and how to have access to healthier food and how to change public policy to make food healthier for people. And I think that people are wanting to lead healthier lives. They want to lose weight to prevent certain nutritional related diseases. I think people are seeing their relatives and their loved ones die, like I did, and I think that all of these things are coming together.

Watch a clip from Byron Hurt's "Soul Food Junkies" below.
Download
Calling all HuffPost superfans!
Sign up for membership to become a founding member and help shape HuffPost's next chapter
Join HuffPost 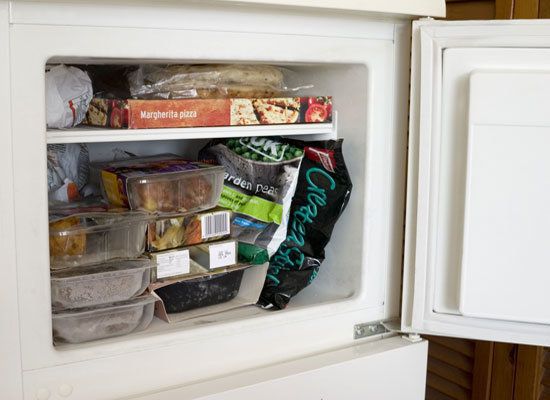 1 / 20
Prepare And Freeze Holiday Dishes Ahead Of Time
Avoid a Thanksgiving cooking panic by making some dishes ahead of time and freezing them. Cornbreads and muffins can be made a week before, soups can be frozen for weeks and casseroles and pies can be prepared a day or two before the holiday.
Alamy