A survey distributed to students at Brigham Young University, a Utah-based school run by the Mormon Church, asks students whether they are heterosexual or heterosexual.

As was first reported by The New Civil Rights Movement, the survey question about sexual orientation does not include an option for students to identify as gay, bisexual, or anything else besides heterosexual or "other." 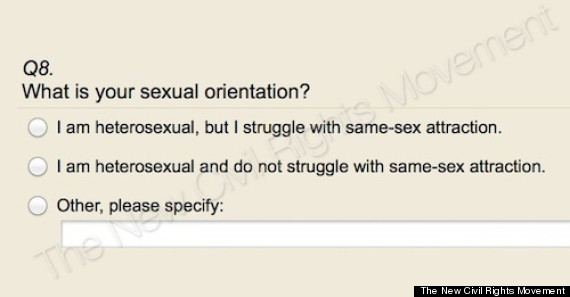 The survey was distributed to students by the The Church of Jesus Christ of Latter-day Saints -- which owns and operates BYU -- to better understand millennial views on marriage and same-sex attraction, according to the New Civil Rights Movement.

Although the university details grooming standards in its honor code -- male shorts must be knee-length or longer, and no sideburns allowed to extend below the earlobe -- BYU does not strictly prohibit anyone from being a member of the LGBT community. Its honor code statement on "homosexual behavior" reads:

One's stated same-gender attraction is not an Honor Code issue. However, the Honor Code requires all members of the university community to manifest a strict commitment to the law of chastity. Homosexual behavior is inappropriate and violates the Honor Code. Homosexual behavior includes not only sexual relations between members of the same sex, but all forms of physical intimacy that give expression to homosexual feelings.

As ThinkProgress notes, guidance from the Mormon Church published in late 2012 also does not describe anyone as actually being gay or lesbian, only that they have a "same-sex attraction."

UPDATE, 4:45 p.m.: Following publication of this article, a spokesperson for The Church of Jesus Christ of Latter-day Saints told The Huffington Post it is updating the question because original wording "was unclear." The survey question now reads:

Do you experience same-sex attraction?
-yes
-no
-other

"The 'other' option includes a space for a respondent to provide any context or explanation they wish," the LDS spokesperson said. "The survey is part of the Church's broader research to understand the attitudes and opinions of Millennials."