A remarkable trove of ancient shipwrecks unearthed in Turkey is yielding new insights into shipbuilding as it was practiced more than a thousand years ago in the Eastern Roman (or Byzantine) Empire.

Since 2004, archaeologists from the Istanbul Archaeological Museums have discovered 37 shipwrecks during excavations in the Istanbul's Yenikapi district. Now, eight of the wrecks--including vessels dating from the 5th Century to the late 10th Century--have been described in a new paper.

And it's a big deal.

"Never before have such a large number and types of well-preserved vessels been found at a single location," study co-author Dr. Cemal Pulak, associate professor at Texas A&M University's Institute of Nautical Archaeology, told The Huffington Post in an email. "Even more fascinating is the fact that we can now trace how ship construction and ship design changed over the course of nearly half a millennium." 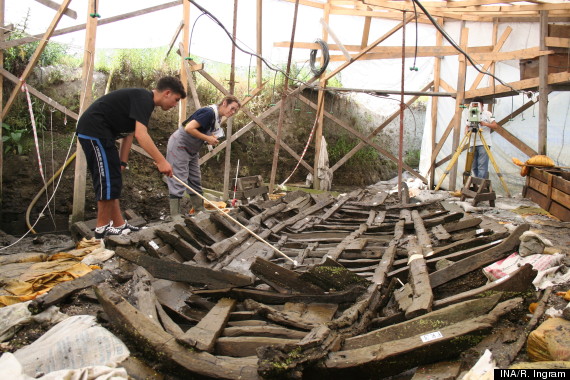 The eight shipwrecks include six round ships and two long ships, or naval galleys. The other ships discovered in the district include small fishing boats, small- to mid-sized coasters, and a very large ocean-going merchantman.

For the study, the researchers looked carefully at the manner in which the ships were constructed, linking every nail hole in each ship's frame to its corresponding hole in the planking.

"It is through this type of meticulous and time-consuming detective work that eventually reveals how these ships were designed, built, modified, overhauled, and used over time," Pulak said in the email. "By such means we try to understand the minds of the shipbuilders and their design and conceptualization processes in order to better comprehend the history of science and engineering." 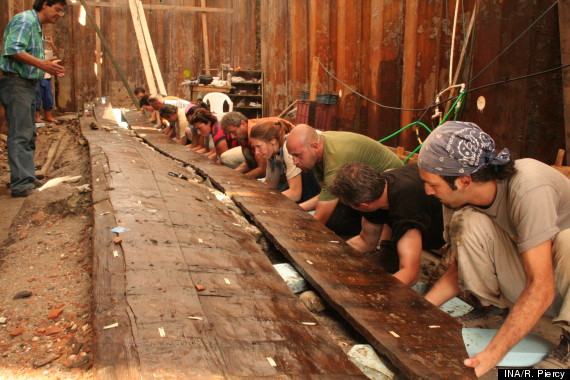 Dr. Cemal Pulak (far left) oversees the removal of a plank from one of the ships, galley YK 2, in August 2006.

What exactly did the researchers find?

Two distinct methods were used to construct the ships: the traditional method of the ship's shell of planking (or shell planking) being built first, and the modern method, in which the ship's skeleton (or frame) is built first.

The finding suggests that a shift from the shell-first method to the skeleton-first method came sometime between the 5th and 11th Centuries, Live Science reported.

"In other words, what made Byzantium a maritime merchant and naval power was its utilization of many different types of vessels that differed in size and shape, and based on different design criteria as required for the specific task they were put to," Pulak said in the email.

The study was published online Dec 8, 2014 in the International Journal of Nautical Archaeology.