In my last post, I talked about two kinds of faith, and it was clear from the responses that some don't think faith can seek understanding and thus undergo scrutiny.

In that post, I presented the 20th century writer and intellectual C. S. Lewis as an example of that type of faith. Here I hope to clarify my meaning. 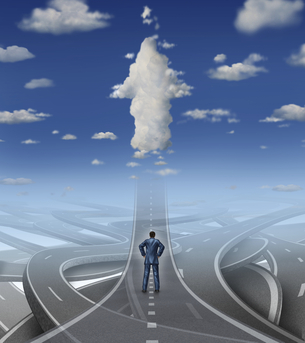 First of all, I've rarely found Lewis simplistic or pat. In fact, in him I discovered a kindred spirit -- one for whom faith was by no means self-evident or devoid of serious reflection, a person who struggled with Jesus as a unique revelation of God, who took religious faith seriously with all his powers of thought. Lewis's writings thus engage his readers. (This is the central thesis of my book C. S. Lewis and the Crisis of a Christian.) Debra Winger studied Lewis in preparation for her role as Lewis's wife, Joy Davidman, in the film Shadowlands and offered this evaluation of Lewis: "He may make difficult questions accessible. I don't think he makes answers 'easy.' I don't think he answers questions. He discusses them."

His writings possess a fluidity of style and mind that slowly engaged me as a fellow lover of books and, when I first read him, a soon-to-be undergraduate in comparative literature. And in him I met a fellow seeker who spent his life in a secular, world-class university, a place where Christianity, if treated at all, was passé, a vestige of western civilization that had long ago thrown off such infantile beliefs. Even more, as graduate of the prestigious "Greats" program at Oxford, he knew intimately the history of the western canon.

It was sometime in the last year or two of high school that I first read Mere Christianity, Lewis's presentation and defense of Christianity (two tasks that almost always appeared together for him no matter what the subject). I returned to Mere Christianity in college, I was astonished: here a writer, a Christian at that, was somehow making the whole Christian faith reasonable. I had been taught that Christianity was anything but reasoned. The most reasonable author I had read to date was also a proponent of this severely unreasoned faith. Lewis taught me that Christian faith requires and sustains serious reflection, but is not ultimately somber. The content of faith is important, serious, but never frivolous: "Christianity, if false, is of no importance, and if true, of infinite importance. The only thing it cannot be is moderately important."

In fact, faith and the experience of God lead to joy.

And although I didn't really know who this Lewis guy was, nor what a truly world-class mind he possessed, he made sense. It was so similar to a sentiment that Lewis himself would record -- and which I read many years later -- about his own reading, as a young college atheist, of the Catholic journalist G.K. Chesterton and his book The Everlasting Man that set out "the whole Christian outline of history" in a quite reasonable form, concluding that, "Chesterton was 'the most sensible man alive 'apart from his Christianity.' Now, I veritably believe, I thought -- I didn't of course say; words would have revealed the nonsense -- that Christianity itself was very sensible 'apart from its Christianity.'"

Even in this citation, Lewis demonstrates that, though witty (i.e., the irony of attempting to believe Christianity is sensible "apart from its Christianity"), he was never frivolous. As his friends would remind us, Lewis was a very funny man. Faith therefore could be both intellectually engaging and hilarious. As his former student Alastair Fowler once remarked, "Lewis seemed always on the verge of hilarity -- between a chuckle and a roar."

But he knew that humor could also lead to trivializing important topics. In his famous imagined correspondence between a senior and a junior devil about how to tempt the human soul, The Screwtape Letters, he called it Flippancy when the joke is always assumed:

No one actually makes it; but every serious subject is discussed in a manner which implies that they have already found a ridiculous side to it.

Accordingly, his humor supported his exposition but never dominated or diminished it.

Lewis taught me that Christian faith could withstand serious intellectual engagement. And Lewis engaged instead of simply defending in his apologetics. In fact, as I interrogated other philosophies (for example, the thought of French poststructuralist Michel Foucault was hot at Berkeley in those days) they actually didn't stand up as well. And so I was being won over, and I began to engage it.

Or better, through Lewis's writings, God began to engage me. I was being shaken--shaken so that I could then be stabilized. My crisis of doubt found an answer in a compelling vision of Christian faith, and I can attribute a fair measure of this to Lewis.