In my third week of 5K training, I was struck with dreaded shin splints. Usually this would be cause for celebration, as it would mean I didn't have to exercise anymore. But with a mandatory race on my sister's wedding day just a month away, I attempted to power through, and in so doing got a good idea of how the app C25K (that's Couch to 5K, abbreviated for the cool kids) motivates its users.

C25K is one of the more popular apps that have popped up around the copyrightedCouch to 5K Running Plan, a prescribed training schedule from CoolRunning.com that gradually increases distance and time running over a 3-workout-per-week 9-week period. Several apps that program this schedule into your iPhone have sprung up, and C25K is one of them. It appears near the top of the search results, it was recently updated and it has a nice icon, so I'm reviewing it.

Look, I make the rules here, and if C25K's groovy logo appeals most to my lazy bones, then C25K is the app that deserves to be profiled in the Fitness Apps For Lazy People series.

BEST REASON TO GET OFF THE COUCH: Your Workout Is Planned For You

This is a general benefit of the Couch to 5K program by CoolRunning, and not one specific to this app, but man, is it great to not have to decide beforehand how far I'll run, or how quickly, or any of that nonsense. C25K comes pre-loaded with the prescribed times and efforts (run, jog, walk) that you should be doing on any given day of your workout. Imagine my relief when on the first day of my third week, after having laced up my shoes and slathered my armpits in deodorant, I was greeted with a screen on the app telling me exactly what I was going to be doing and for how long that evening: 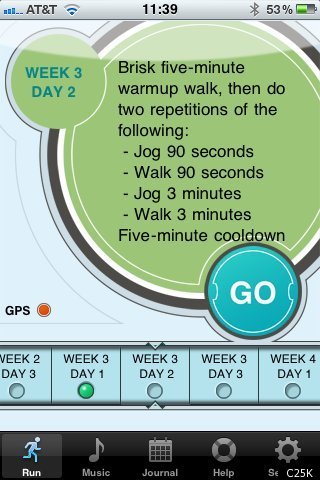 And then you press Go and you're off! Warm-up included! What more could a lazy man trying to get in shape ask for?

BEST REASON TO STAY ON THE COUCH: Once You Start Running, You're All Alone Out There

I've written often in this series that an app's ability to distract me from the fact that I'm exercising is key if it is going to be designated a Lazy People's Fitness App. And though C25K does have the requisite robot-trainer that informs you how much time you have left in any given segment--well, that's just about all that robot-trainer says. No pace, no overall time left, no encouragement: When you're running with C25K, it's just you, your music, and your somewhat taciturn trainer.

Someone needs to tell the C25K robot that it's okay to get in my face and yell at me -- that's what I want. That's what I need! Talk to me, C25K robot-trainer! Get in my face, curse at me, tell me I'm worthless! I'm dying out here!

IS C25K A GOOD FITNESS APP FOR LAZY PEOPLE?

I suppose this depends on what kind of lazy person you are. If what prevents you from exercising is the simple lack of structure, then C25K will work great for you. It's got a pretty user interface, a nice in-app music control, and it works flawlessly at delivering the Couch to 5K program to your iPhone. And yes, it does look really, really good: 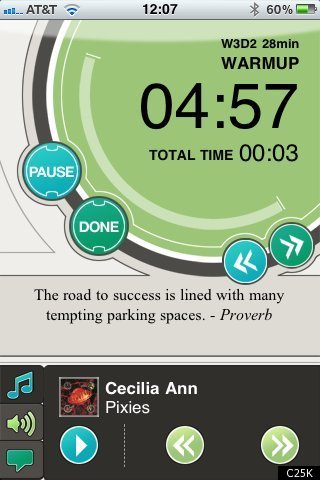 If you need to be distracted from the fact that you are exercising, then you have better options. This is a fairly basic app without bells-and-whistles: the plain-text version of the Couch to 5K training plan. Next week, I'm going to look for the Hollywood summer blockbuster version, with lots of explosions, car chases, cowboys, aliens and anything else to fill up the time during my runs. I love the Couch to 5K program, and I'm not ready to move on quite yet, so if you've got a Couch to 5K app for either Android or iOS with lots of different features, let me know what it's called at jason.gilbert@huffingtonpost.com.

I'm a month away from my race, and I'm afraid that I am still more "couch" than "5K." Help me out, readers. Get me away from this comfy, comfy leather.

C25K ESSENTIALS (Listed In Bullet Form, For The Lazy)

Things It Can Do: Integration with the CoolRunning Couch to 5K training plan
GPS and map tracking with $1 in-app purchase
In-app music controls
Works with Nike+
Spoken audio alerts for switches from run to walk, time countdown
Share workouts to Twitter and Facebook after completion

This is part of a series of articles profiling fitness apps for lazy people. I am training for an August 27th 5K, despite my better instincts. For the introduction and mission statement, click here. You can follow my progress on Twitter @gilbertjasono, or by "liking" my reporter page here. Stay tuned for next week's Fitness Apps For Lazy People series installment when I review a TBA Couch to 5K app.