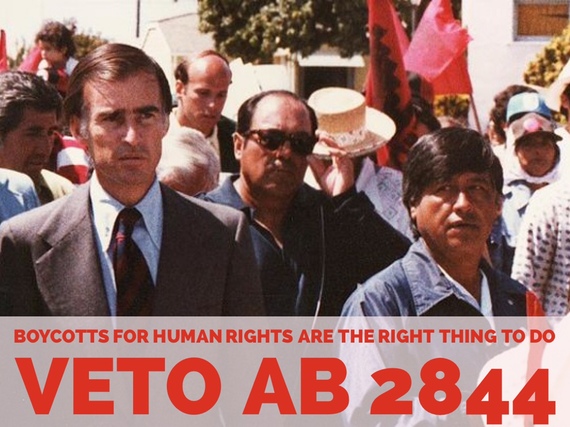 A bill intended to suppress boycotts in support of human rights and social justice has passed the California Legislature over the opposition of the state Department of Finance, which predicted it could cost the state more than $140 million and get tied up in litigation - all for accomplishing nothing more than existing statutes already provide. For that reason alone, our fiscally minded Governor Jerry Brown, a man who once marched alongside worker champion Cesar Chavez, should veto AB 2844.

But it gets worse. The Israel lobby's core goal with this proposed legislation - a phenomenon being replicated in about half the states' legislatures -- is to demonize and even outlaw boycott, divestment and sanctions (known as "BDS") campaigns for Palestinian rights. These campaigns have gained momentum in recent years as more and more Americans become fed up with the unjust and untenable status quo in Israel/Palestine, propped up by billions in U.S. military aid.

Dozens of student governments have passed resolutions, and a growing number of mainstream churches have adopted boycott and/or divestment strategies after concluding that "engagement" with Israel or with corporations whose business activities uphold international law violations was ineffective. A recent Brookings Institution poll found 49 percent of Democrats would support sanctions against Israel for its illegal settlement construction in occupied Palestinian territory.

As passed, AB 2844's convoluted, obtuse language would cast a pall of suspicion over anyone who pursues a "policy ... against any sovereign nation or peoples recognized by the government of the United States, including, but not limited to, the nation and people of Israel." It would force any entity - business or non-profit grant applicant - that wants to bid on a public state contract worth $100,000 or more to certify, under penalty of perjury - a felony - that this "policy" is not a pretext for "unlawful discrimination" under existing California civil rights law.

That this veneer of anti-discrimination language is itself a pretext is demonstrated by the fact that the word "discrimination" appeared nowhere in the bill's early versions. But as the proponents' repeated statements attest, it can't hide what remains their goal: To single out, stigmatize and pave the way for suppression of those who advocate for Palestinian human rights, absurdly conflating criticism of a country's policies with anti-Semitism.

Unlawful discrimination by state contractors is already prohibited under laws named in AB 2844. So taken at face value, this new law would be utterly redundant - except for the fact that it would open the door for a witch-hunt, involving creation of an unprecedented thought crime.

Under AB 2844, anyone may submit complaints to state officials, who would then have to investigate and possibly prosecute a business, or even nonprofit charitable institutions like churches, for boycotting products from illegal Israeli settlements built on occupied Palestinian land.

And such complaints would surely come: Staunch defenders of Israel already deluge federal and state agencies, universities and mass media with allegations that critics of Israel, especially faculty and student groups, present a threat to Jewish students. Their complaints have been investigated -- and consistently, resoundingly dismissed. But AB 2844 would provide them with more ammunition to obfuscate the distinction between acting on political principle and committing unlawful discrimination.

AB 2844 would have state employees act as thought police under a law that if signed, may qualify as the most vague statute ever. "Policy," for instance, is not defined in the bill, nor anywhere in California's codes. And a longstanding constitutional rule ensuring elementary due process dictates that a law must be extra clear in describing any act that might result in criminal prosecution. "Pretext for discrimination" is anything but clear.

Furthermore, the costs of implementing AB 2844 could be staggering. Asked for input from the Senate Appropriations Committee, the Attorney General's Office, explicitly tasked with handling complaints until the last round of amendments, predicted it would cost $625,000 a year to receive complaints, investigate and possibly prosecute. Now, the Department of Fair Employment and Housing and others will be responsible instead, but the costly mandate to investigate remains unchanged. Committee staff further estimate that the narrowed field of bidders resulting from companies or non-profits that refuse to sign the affidavits could cost the state an additional $140 million a year.

What's this all about anyway?

Israeli officials and their U.S. surrogates are losing ground in their efforts to deflect growing criticism of Israel's nearly 50-year-old military occupation of the West Bank, including East Jerusalem, Gaza and the Golan Heights. Along with the occupation comes theft of Palestinian land for settlements that violate international law and longstanding official U.S. policy, escalating racism against non-Jews, the destruction of Palestinian homes, extrajudicial executions and the suffocating Gaza blockade. More and more Californians are responding to Palestinian civil society's call for non-violent solidarity in the form of boycott and divestment campaigns to advance long-denied Palestinian human rights and freedom.

So instead, defenders of the status quo are trying to legislate against criticism with anti-boycott bills introduced in Congress and about half the states. Fortunately, civil libertarians are mobilizing to resist, not only in California but also in Massachusetts, Virginia and Maryland, where efforts have been stymied. When a bill stalled in New York recently, Gov. Cuomo called the legislative process "tedious" and implemented draconian anti-boycott rules by executive order. Lawsuits are brewing.

The Center for Constitutional Rights, American Civil Liberties Union, Bill of Rights Defense Committee, CODEPINK, Palestine Legal and many other civil and human rights organizations have come out in opposition to AB 2844 and similar bills, warning that such legislation threatens our First Amendment right to free speech and in the case of AB 2844, our Fifth Amendment right to due process. 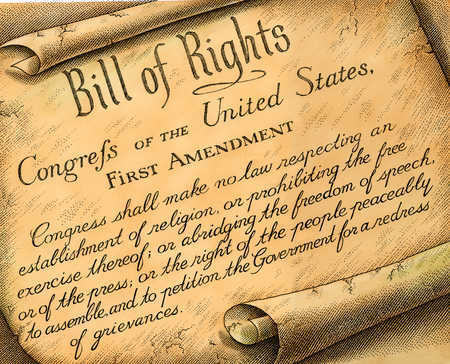 A California Assembly Judiciary Committee analysis of an earlier version of AB 2844 remains pertinent because it addressed what are still the motives behind the bill: "It is difficult," the consultant wrote, "to imagine legislation more clearly calculated to have a chilling impact on the exercise of protected speech."

Legislators should pay attention to the growing number of constituents who support Palestinian rights, lest they find themselves on the wrong side of history. But even if these lawmakers are not yet on board with the cause, they should defeat AB 2844 because it undermines free speech wile robbing citizens of resources needed to provide vital services such as public education and health care.

For these reasons, we - members of the statewide Coalition to STOP AB 2844 - urge Governor Brown to reject this bill.

We commend Governor Brown for his past support of farm workers during their boycott campaigns and urge him to stand once again on the right side of history by vetoing AB 2844.

Please add your voice to our call for a veto. Sign one of the on-line petitions and contact the Governor directly:

David L. Mandel is an active member of the Sacramento chapters of Jewish Voice for Peace and the National Lawyers Guild, and has been coordinating the statewide coalition opposed to AB 2844. A longtime journalist and former legal aid manager, he lived in Israel for 10 years and is a dual U.S.-Israeli citizen.

Marcy Winograd, a member of Jewish Voice for Peace, is a former congressional peace candidate who led a protest delegation to the office of the bill's principal author, Assemblyman Richard Bloom (D-Santa Monica).