Fans won't want to miss Tony winner Betty Buckley's all-too-brief stint at Joe's Pub through May 31. I'm still disappointed I missed her shows here last fall. First, Joe's Pub is one of New York City's best intimate spaces for live performance. Second, she was promoting her new album Ghostlight, which was co-produced by longtime friend T Bone Burnett and may well be the album of her career. It was certainly one of the ten best CDs of 2014. I hoped and assumed Buckley would still be promoting that work.

But ever restless as Buckley is, she's created an entirely new show dubbed "Dark Blue-Eyed Blues." It finds Buckley in a playful mood. She dished up some amusing anecdotes, ranging from singing one of her favorite songs in the shower ("Come To Me, Bend To Me," a highlight of that album and this show), feeling jealous of the spotlight at a grade school talent show and falling in love with a hot but dumber-than-soap man and needing couples therapy to admit to herself she'd have to move on from this appealing but inert hunk.

This light mood was captured in quick, upbeat renditions of "Them There Eyes," "Do Nothin' Till You Hear From Me" and "Blues In The Night" (not to mention the defiant "I'm Still Here" which Buckley sang recently in an all-star concert production of Follies at the Royal Albert Hall in London).

But for me, this isn't where Buckley lives. Like Peggy Lee and Shirley Horn, Buckley is a master at quiet, intimate, revelatory renditions of songs you thought you knew but which sound utterly fresh and new when she sings them.

"This Nearly Was Mine' (from South Pacific, of course and a rare selection on her setlist that appeared on Ghostlight) was an early highlight of the 80 minute set, a moving but dry-eyed spin that asked for no pity.

(Dry-eyed, by the way, is not the most typical phrase to use when discussing Buckley since she digs deep into the emotions of tunes -- not to mention offering a tribute to her friend Stephen Bruton who has gone too soon --and the tears often discretely flow.)

Another masterful moment was the lullaby "All The Pretty Horses," a song which would have fit perfectly on Ghostlight but doesn't appear on that album. The arrangements of musical director Christian Jacob here and throughout the show leaned on low-key dissonance to create a shimmering backdrop that is deceptive and -- one imagines -- quite tricky for a singer to navigate, though Buckley makes it seem easy. Between threading the needle on the arrangement and using her microphone with consummate skill, Buckley made this promise to a baby feel like a blessing of prosperity for one and all. They delivered similar magic on an exceptional Rodgers & Hart medley that contained "Where's That Rainbow," "Spring Is Here" and "Falling In Love With Love."

(Here's Buckley singing "Bewitched," another highlight of Ghostlight during a recent concert.)

With her mother and godmother in the audience, Buckley was in fine fettle throughout. She also kept a stand with lyrics facing her wherever she wandered on the stage; those paying attention could enjoy a master class of seeing her quietly move it this way and that without ever calling attention to the fact. Whether Buckley always keeps lyrics handy to free her of anxiety or just at the beginning of a new show, I can't say. I can say that her casual glances at the sheets now and then didn't detract from her performance in the least.

It's been almost 18 years since she opened a show on Broadway, which is absurd, as Buckley proved by her terrific rendition of Sting's "Practical Arrangement," a cooly observant tune about a lack of love not being an impediment to marriage that was written for his musical The Last Ship. One wonders how a mother feels hearing the child she once held in her arms deliver the insight of Joni Mitchell's "Both Sides Now" as an encore, though of course it's always a shock to remember this wise song was written when Mitchell was just 23 years old.

So it's a solid if not yet transcendent show, with her band in fine form and Buckley in excellent voice. If you can't catch it, do yourself a favor and get Ghostlight right away. 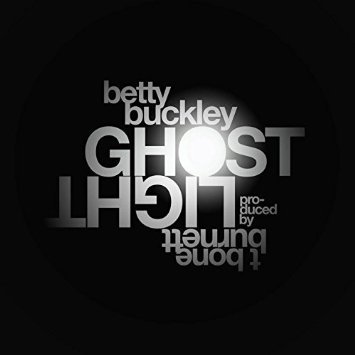 And to heck with variety, Buckley, give us a dark night of the soul show, an In The Wee Small Hours style evening of intimacy and regret. Leave the upbeat numbers to the kids who don't know better. On the penultimate performance of the concert proper, Buckley delivered Leonard Cohen's "Bird On The Wire" with grace, opening her arms wide as she sang "I have tried in my way to be free," as if to say, "This is who I am." Revered? Definitely. Underutilized on stage and screen because she doesn't play the game the way they expect? Unquestionably. Free? Artistically for sure, and that's surely the only way that matters.

Thanks for reading. Michael Giltz is the founder of BookFilter, a book lover's best friend. Looking for the next great book to read? Head to BookFilter! Need a smart and easy gift? Head to BookFilter! Wondering what new titles just hit the store in your favorite categories, like cookbooks and mystery and more? Head to BookFilter! It's a website that lets you browse for books online the way you do in a physical bookstore, provides comprehensive info on new releases every week in every category and offers passionate personal recommendations every step of the way. It's like a fall book preview or holiday gift guide -- but every week in every category. He's also the cohost of Showbiz Sandbox, a weekly pop culture podcast that reveals the industry take on entertainment news of the day and features top journalists and opinion makers as guests. It's available for free on iTunes. Visit Michael Giltz at his website and his daily blog.

Note: Michael Giltz is provided with free tickets to concerts with the understanding that he will be reviewing them.