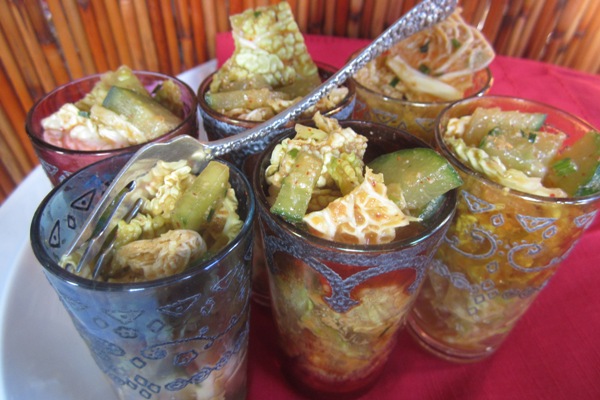 
Hear this, Congress: Scientists do make a difference!

Recently, researchers have begun turning their attention to a burning question in food science: Should you eat vegetables raw or cooked? The answers are evolving, and a lot more complex than a simple yes or no. It depends on what vegetable you're talking about and how you cook it.

Cabbage, like other cruciferous vegetables, is teeming with cancer-preventive compounds, but you have to handle it tenderly to reap those special rewards. Food scientist and crucifer expert Dr. Paul Thornalley, of the University of Warwick in Great Britain, has some practical advice for capitalizing on cabbage.

Cooking cabbage (and other crucifers) at high temperatures for prolonged periods destroys the active enzyme myrosinase, needed to turn compounds called glucosinolates into others called isothiocyanates, which in turn are responsible for the cancer-preventive actions. Translation, please?

Lab studies have shown that crucifers can prevent cells from being damaged by toxins, inhibit cancer cell proliferation and the inflammation that drives it, and suppress the growth of blood vessels that cancer cells make in order to spread. (That's the process of angiogenesis.) Several studies have also shown reduced rates of certain cancers among people with diets high in crucifers.

When you boil cabbage leaves, however, the myrosinase is destroyed and the glucosinolates end up in the liquid, Thornalley said. To help preserve the enzymes, do a quick sauté or light steam instead. Even if the heat destroys some of them, bacteria in your gut will take over their role and transform glucosinolates into isothiocyanates to some degree. As for microwave cooking, to minimizeglucosinolate loss, keep the time, temp and amount of water you use low.

What about baking or braising or roasting crucifers? Thornalley hasn't tested that yet, but said that very high temperatures -- much higher than 212 F (100 C, the boiling point of water) -- for prolonged periods will probably kill them off. In fact with all crucifers, if you're aiming for the most cancer-preventive activity, raw is best, he said.

Tip 2: When you cut crucifers, make sure the pieces are fairly large.

They should be about half an inch (a centimeter) or larger for vegetable leaves such as cabbage and ⅕ teaspoon (a millileter) or larger for flowers such as broccoli. Using smaller cuts, Thornalley said, will destroy the enzyme's ability to create the cascade of actions that produce cancer-fighting compounds.

Tip 3: Don't let cut crucifers sit on the counter for more than two to three hours.

They will lose those magic compounds. Instead, keep cut cabbage and other crucifers in the fridge, where the compounds should last for several days, he said.

So if you're not counting on cabbage rolls or finely-shredded coleslaw for your daily dose of cancer-fighting crucifers, what can you do with that head of cabbage instead? Here are some ideas (from my humble kitchen, not Thornalley's lab):

• Raw chunky coleslaw -- Cut in strips at least ½ inch thick. Dress with cold-pressed, extra virgin olive oil and a little vinegar. Add raw scallions, cut on the diagonal, carrots and red peppers, julienned. It doesn't seem to matter how small you cut the carrots, peppers and scallions. Top with caraway or cumin seeds, which may help avert the gas. And chew well, over and over, which, from my abundant experience, definitely aids in that department.

• Raw chunky cabbage soup -- This can be any variety of healthy soup, with the cabbage added at the end so that it doesn't actually cook. Cut the cabbage in ½-inch squares (or larger), which are easier to get into your mouth than long, thickish strips.

• Lightly sautéed cabbage -- Sauté chunky strips briefly in olive oil on low to medium heat. (Don't let the oil smoke because that turns it rancid.) Add spices, seeds, sauces, other quickly sautéed veggies. Wrap the mixture in a lettuce or steamed collard leaf, or serve up a moo shu platter.

• Lightly steamed cabbage -- Use a steamer so that the cabbage doesn't cook in the water and use as little water as possible. Cook quickly, then add some tasty seeds, herbs, sauce. And it can't hurt to throw the cooking water back into the final dish.

• Sauerkraut -- It's simply raw cabbage that's been fermented, meaning healthy bacteria are produced, which increase the cancer-fighting properties. Look for local brands that haven't been pasteurized (heated in order to destroy germs.) Or make your own. For a more potent anti-cancer recipe, add some turmeric to mustard and mix with the kraut. Or stir this turmeric concoction into the mustard. The black pepper enhances turmeric's cancer-fighting actions; the cumin powder, its earthy flavor.

• Kimchi -- This is fermented cabbage, Korean style. Find a local supplier who doesn't use loads of sugar to counter the intensity, or make your own. And be forewarned: Korean red pepper powder can be explosive. Once again, a light touch prevails.

Here's a quick way to make kimchi at home. For a whimsical touch, serve in glass tea cups.

1 tablespoon coconut sugar or ½ tablespoon Xylitol made from birch, not corn, to sweeten (optional)

1. Let the cabbage soak in a large container of salted water for at least 4 hours. Then rinse it several times under cold running water, and pat it with a towel to remove the wetness.

2. Make the paste: Using a skillet, bring the water to a simmer and add the flour. Whisk over medium high heat for 3 minutes. Add the sweetener, and continue to simmer for another minute. Remove from heat and set aside.

3. Mix all the remaining paste ingredients in a food processor, then add the flour mixture.

4. Combine cabbage with cucumbers, scallions, chives and soy sauce. Add the paste. Put the mixture into the glass jar, and let it sit at least 24 hours. The longer it ferments, the better.

Should you ferment foods at room temperature or in the fridge? "You'll get more significant microbial development" at room temp, fermentation guru Sandor Katz said. On the other hand, you might feel safer in the cold, especially if you live in hot climes.

Zester Daily contributor Harriet Sugar Miller has been an independent health journalist and cancer survivor for two decades. She blogs about the nutrition-cancer connection at www.eatandbeatcancer.com and is writing a book, with practical guidelines and easy recipes.

» Is kimchi the new sushi?