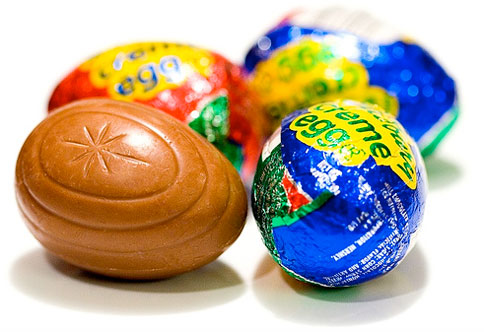 A Little History
In 1824, John Cadbury opened a shop in Birmingham, England where he sold tea, coffee, hops, mustard, cocoa, and drinking chocolate, which he made himself using a mortar and pestle. A century later, in 1923, the company that grew out of his shop released its first cream-filled eggs. But the Cadbury Crème Easter Eggs we all know and love weren't invented until 1971. Four years later, the first TV ad appeared for Cadbury Crème Eggs and these chocolate confections became an international Easter classic. Many Americans will remember the "clucking bunny" campaign, begun in 1982.

How are they made?
The Cadbury Crème Egg is manufactured by pouring liquid chocolate into a half-egg shaped mold, which is then filled with white fondant and a dab of yellow fondant. Because the fondant has a greater density than chocolate, the two don't mix together and the fondant pushes the chocolate outwards. The two mold halves are quickly closed and cooled to allow the chocolate to set. 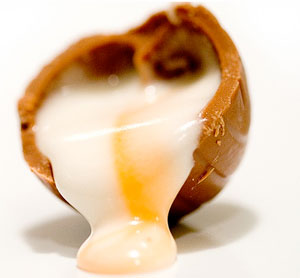 How do you eat yours?
In 1985 Cadbury launched the memorable ad campaign, "How do your eat yours?" The official Cadbury website offers two methods: "egg and soliders" and "bite and lick." If you prefer egg and soldiers, you eat the chocolate egg like a soft-boiled egg by placing it in an egg cup and eating the fondant filling with a spoon or scooping it out with Cadbury Fingers. "Bite and lick"--pretty self-explanatory--describes the method of biting the top and sucking out the cream.

According to a Cadbury survey:
53% of people bite off the top, lick out the cream, then eat the chocolate
20% just bite straight through
6% use their finger to scoop out the cream

An extra tip Cadbury offers is to mash the remaining chocolate shell (left after biting the top off and eating the fondant) and mix it with a dash of Grand Marnier.