Not too many of his subjects were saddened by the death of King Herod the Great in 4 B.C. Herod, the Romans' front man for their Judean province, was known for his mass slaughters of enemies, suspected enemies and real and imagined conspirators. Untrustworthy family members bit the dust, too, among them one of his wives, three sons, a mother in law and two brothers in law. 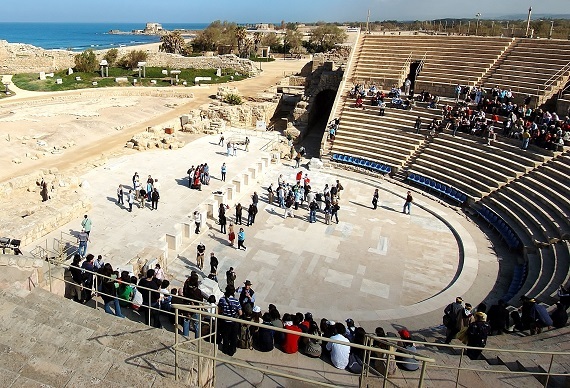 Amphitheater at Caesarea. Photo courtesy of the Israeli Ministry of Tourism.

Herod had ruled Judea (roughly the lands of modern-day Israel) from his ornate palace in Jerusalem. When he wasn't out ridding the province of enemies, he spent the bulk of his time building more palaces, such as Herodium, the mountaintop getaway of Masada - later used as a fortress by close to a thousand Jewish rebels who ended up killing themselves there rather than surrender to the Romans - and super-sizing the site of the Second Temple of the Jews in Jerusalem. 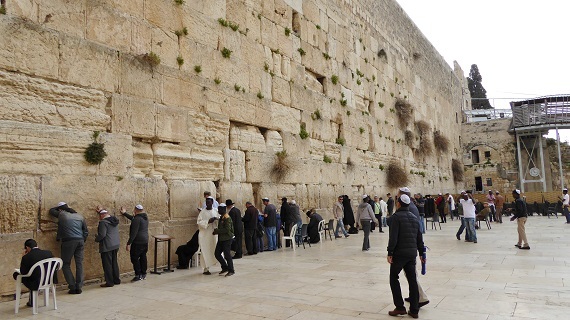 One of Herod's most magnificent projects was the mega-port of Caesarea, which he built like a mini-Rome to dazzle the Roman emperor (Augustus Caesar, aka Octavian) at the time. Among features of the city was a vast, man-made harbor sheltering as many as 300 ships, a hippodrome used for world-class chariot races and a hillside amphitheater where spectators could watch gladiators slash away at each other under a lovely view of the Mediterranean.

Scattered around the port were majestic promenades lined by marble columns, mosaic sidewalks, an elaborate complex of public baths, statues of Roman gods and all kinds of shrines, sculptures, halls, gates, arches and squares. 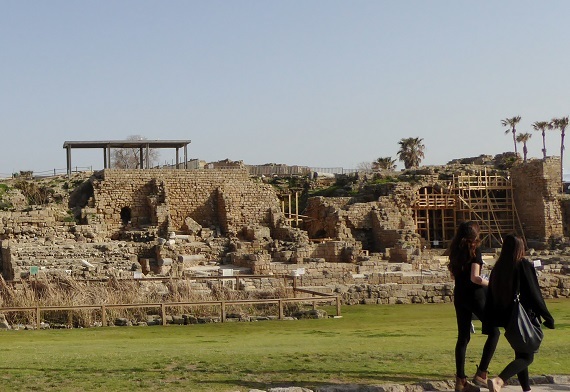 Restorations bring back the beauty of Caesarea. Photo by Bob Schulman.

A few years after Herod's death the Romans shifted the administrative headquarters for their Judean province from Jerusalem to Caesarea, a move said to have made the Roman governor and his department staffers and their small army of guards very happy. Not only did the port offer cool breezes drifting in from the Mediterranean - vs. the often hot and sticky climes of inland Jerusalem - but also the off-duty attractions of the hippodrome, the baths, the seaside amphitheater and lanes of taverns full of ways to help lonesome sailors pass the time.

No wonder the Roman brass only left Caesarea and went to Jerusalem when they had to, such as during Passover and other high holidays of their Jewish subjects. They also made the 30-mile trip down the coast to what's now Tel Aviv and then the 40-mile inland trek to Jerusalem for special events, like the trial and crucifixion of a preacher believed by many to be their messiah. 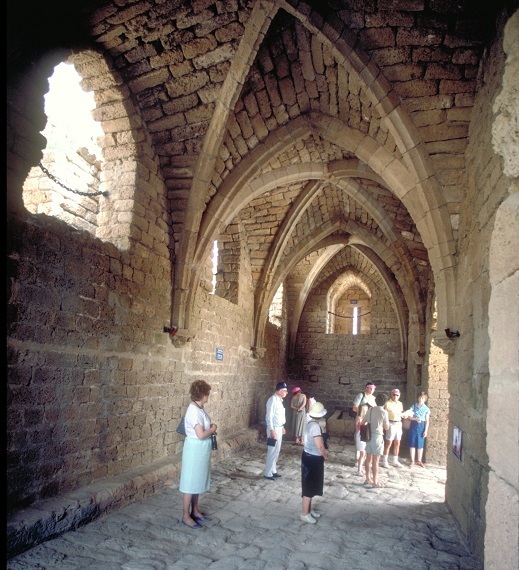 Tourists explore the crusader entrance to the city. Photo courtesy of the Israeli Ministry of Tourism.

And so Rome's Judean governor Pontius Pilate was in Jerusalem around A.D. 30 to turn the matter of the preacher's execution over to Herod Antipas (like his father, Herod the Great, the titular ruler of Judea) and to "wash his hands" of the affair (and scoot back to Caesarea as soon as he could).

Fast-forward to today -- after centuries of invasions by various armies, 86 years under the red cross of the crusaders, then more years under the rule of Saladin, then under the Egyptian Mamluks, then the Ottomans, and then the Brits until the state of Israel was created in 1948 - and Caesarea is one of the country's top tourist attractions.

Part of the aqueduct from Mount Carmel. Photo by Bob Schulman.

The hippodrome, where 20,000 racing buffs once cheered for their favorite charioteers, is long gone, but most of the city's signature 10-mile-long aqueduct from Mount Carmel is still standing. So are many of its colonnaded lanes, temples and shrines (although most of these are faithful restorations of the original structures).

Swordfighting fans once pointed their thumbs up to save the life of a vanquished gladiator who'd put up a good fight on the stage of the amphitheater. They still flash that sign today, only now it's because the theater's audiences liked the performances of rock bands such as The Rolling Stones, Pearl Jam and Deep Purple along with Israel's most popular home-grown rockers.