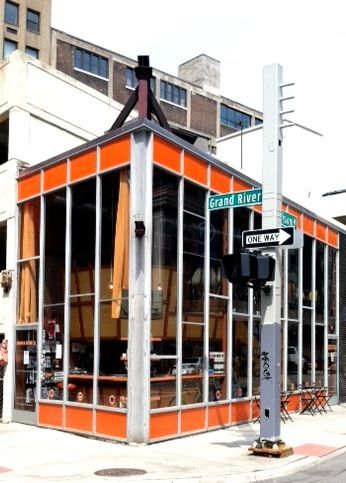 Urban Bean Co. is a modern pocket-sized cafe in Downtown Detroit. In a lot of ways it's your typical coffee shop: espresso machine, mellow ambient music, free Internet. But it asserts its personality with spin tables, full-length glass walls, and a startling Wi-Fi password: "EatTheRich."

It may seem like a strange password for a cafe with prices that are in the mid-to-high range (iced coffee, $3.50) but it carries power beyond the price. If you want to access the Web here, you have to adopt the mindset of the proprietor, Josh, who likes to say "eat the rich" by way of farewell. And in the midst of a city blighted beyond recognition from its former heyday, it's not hard to channel the collective angst against the powers that be. Detroit has been abandoned by countless corporations and people, so the people who live here are fiercely loyal to those tenacious remaining local businesses. This means that Detroit has a higher portion of independently owned coffee shops as compared to other cities, and therefore more opportunities for individual expression within them.

In the age of Internet, coffee shops have become a legitimate workplace for millions. As their popularity rises, individual establishments can distinguish themselves from others by focusing on a particular roasting process, type of bean, style of pouring, country of origin, fair wages, and so on. Since Internet is to coffee shops what TV is to sports bars, its only natural that it has emerged as an important characteristic of a business.

Accessing Internet at Starbucks is the same sterile process at every location: find the ubiquitous ATT network and click "Agree" to the unreadable list of Terms and Conditions (which, when you think about it, is a long way of saying "FeedTheRich"). On the other hand, Urban Bean and its ilk have the opportunity to assign a unique signature to their Internet access.

Great Lakes Coffee is a thriving upscale coffee shop and bar in Midtown Detroit. Ask for the Wi-Fi password last winter, and you'd be pointed to a with a black-and-white photo of Marvin Gaye. Which is to say that, if you want to get online, you must first be able to identify and properly spell the name of a popular black artist. 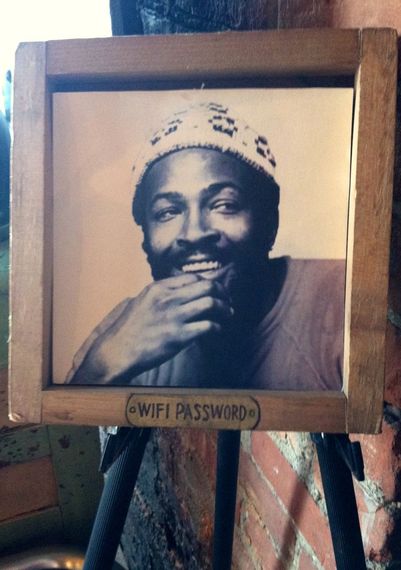 Some people take issue with this. For a coffee shop that caters to predominantly white clientele in a predominantly black city, the emphasis on Motown culture could be seen as a contradiction or even exploitation. A more charitable interpretation is that these customers are exactly the people who have the greatest need for reinforcement of Detroit's black culture. In most cases, first-time visitors humbly ask someone else for the password, but in all cases they get a free lesson.

On the other end of the spectrum lies Astro, Corktown's proud and exclusive-feeling coffee shop, which does not provide Internet to its customers at all. This is no oversight; it is a highly conscious decision on the part of Astro's creators who prefer to encourage interpersonal interaction than electronic tunnel-vision. You can bring your laptop if you are determined, but before long you will notice a pronounced lack of electrical outlets. This is just another subtle way that management coaxes customers toward its mindset. That said, Astro regulars can (and do) access unprotected wireless from nearby networks.

I recently visited my sister in Grand Rapids and set up shop in a cute little coffee shop called The Sparrows. In a bubbly voice, the barista told me that the Wi-Fi password was "Hamburgers." All I could think when I typed it into my computer was "I'm not in Detroit anymore."

I work out of coffee shops nearly every day, but I am not a coffee snob. My considerations are as follows: I would like decent tasting drink with caffeine, I would like it not to cost too much, and I would like for no one to have been enslaved in the process of getting it to me. That's about it.

I do, however, appreciate a venue with personality.

Not long ago, Urban Bean's Wi-Fi password was a playful nod to the strip club across the street: "TheOtherGrind." I was getting coffee there recently when a customer hesitantly approached the counter saying that he couldn't get the Wi-Fi to work. "Did you type in 'EatTheRich'?" The barista asked." "Yes" he replied. "Yeah," I interjected, "but did you mean it?"