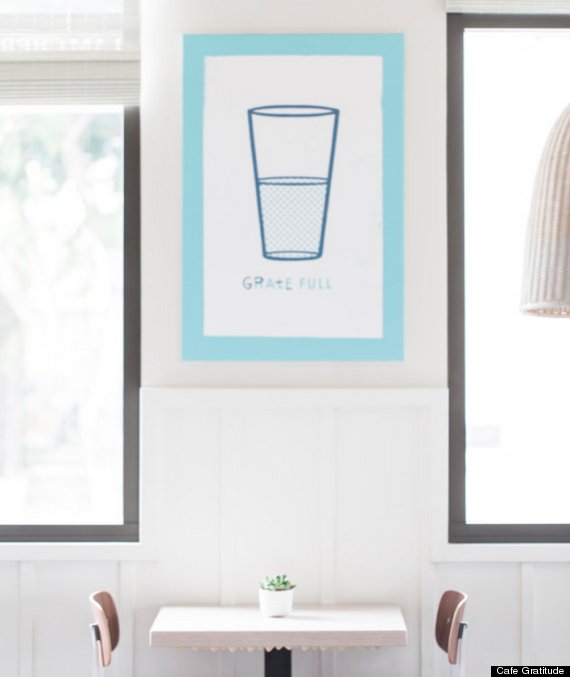 Stepbrothers Ryland Engelhart and Cary Mosier have the “glass half-full” philosophy nailed (…to the wall. Literally.)

The family behind the Cafe Gratitude empire has been at it since 2004, when Ryland’s dad and Cary’s mom, Matthew and Terces Engelhart, opened up their first location in San Francisco -- a fresh vegan restaurant founded on the idea of practicing gratitude in our daily lives.

And it’s truly a family affair: at the first location, one son was behind the bar, another was the manager, the mom was the cook, the dad was the server, and the sister-in-law was the bookkeeper. Today, Ryland and Cary run the wildly successful Larchmont and Venice locations in Los Angeles and their sister runs the equally booming vegan bistro Sage in Echo Park and Culver City. The highly-anticipated vegan Mexican joint, Gracias Madre, opens in LA in late December.

When Matthew and Terces originally met at Landmark Education (a program that offers guidance in personal development), they never thought about starting a business, let alone a restaurant. What they had was a “clear intention that they wanted to have their life make a meaningful difference in the world,” Ryland tells The Huffington Post from the communal table at the sun-splotched Venice Beach Cafe Gratitude.

What started off as a simple board game called The Abounding River, which they deigned to inspire people to practice being grateful, later ended up serving as the model for the first Cafe Gratitude. The menu is broken down into affirmations, so instead of asking your server for the cereal blend of coconut milk, pecans, seasonal fruit, vanilla and cinnamon, you say “I Am Bright-Eyed,” and the server repeats back to you “you are bright-eyed.” They also ask you a question of the day, like, "What moves you to your heart?"

Affirmations aside, the restaurants are packed to the gills and high-profile celebrities like Jake Gyllenhaal, Joaquin Phoenix, Alanis Morissette and Ashton Kutcher have declared their allegiance to the feel-good Vegan dynasty.

The Huffington Post sat down with Ryland and Cary to learn about their own practice of gratitude, why some people think it's a cult and how the key to happiness might really be as simple as shifting your focus. 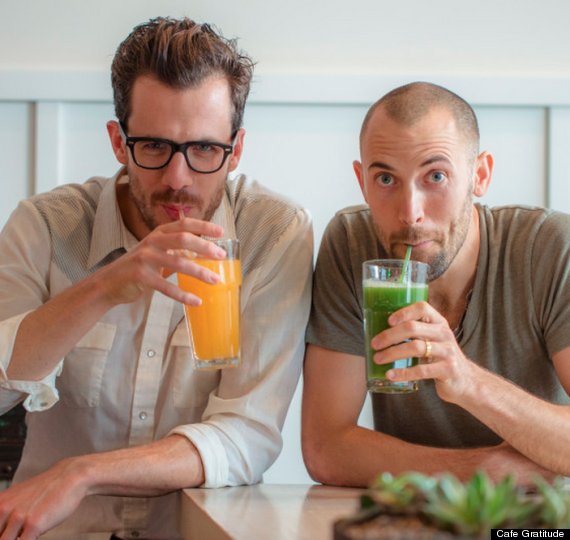 The Huffington Post: You guys do business through a practice you call “Sacred Commerce.” What does that mean?
Ryland Engelhart: Sacred Commerce is a business that is guided by the heart. It’s a business that considers that we all are connected and that the only real win is the win-win. The business practices are good for the planet, our employees, our investors and customers all in one.

The whole concept was to create a work environment that doubled as a school of transformation for our staff as well as the customers. Our parent’s experiment was: What will happen if we use the workspace to cultivate the most important human values -- such as love, gratitude, connection and trust? The fresh, organic and mostly raw menu, coupled with the good community vibration, had customers coming in in droves. The restaurant quickly became a cultural Bay Area hub. It was like the hippie, healthy version of “Cheers.” 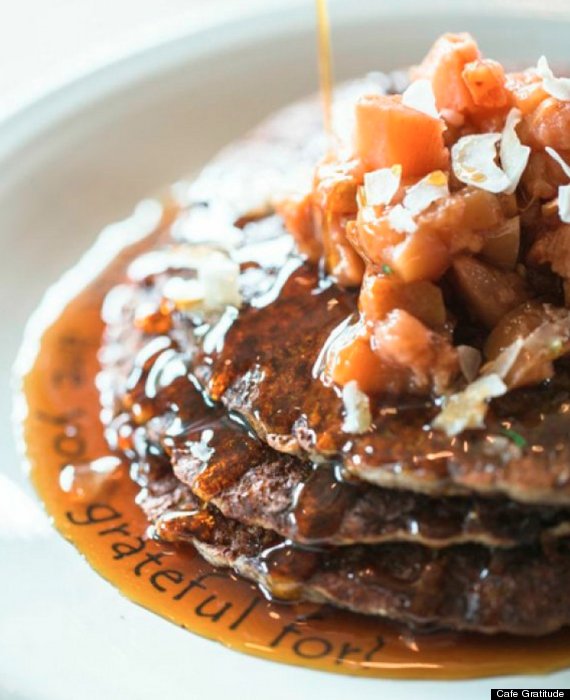 What is the Clearing Process?
Ryland: The clearing process is designed to get our staff present each day. The present moment is where we can feel joy, love and gratitude. Before starting work, our staff members sit down with another staff member and take five minutes to “clear.”

They ask a series of two questions and those questions change daily. The first question invites the participants to inquire into what’s distracting them from the present moment. An example: “What are you concerned about?”

They will share back and forth, and this gives an experience of being listened to and connecting with their feelings. They then ask each other the second question, such as: “What do you love about your life?”

This part is intended to shift their attention to some aspect of gratitude or fulfillment, reminding them that the experience of gratitude is a moment-by-moment choice. The second question becomes the question of the day, which we ask our customers in the restaurant as part of our service. 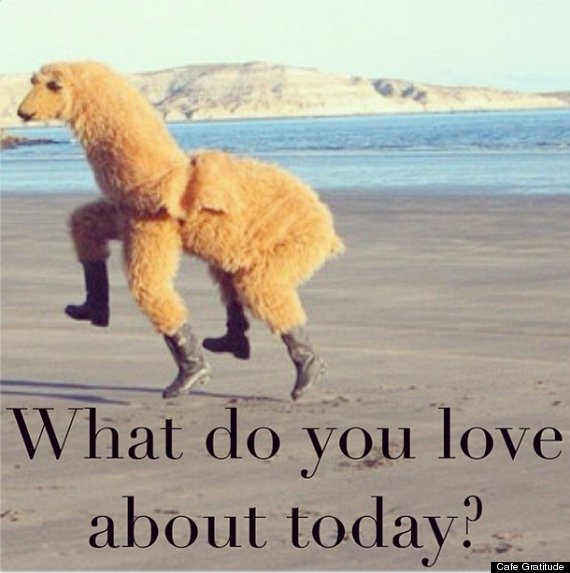 Some examples of the question of the day?
Ryland: What’s your dream? Who can you forgive? What's your passion? What are you committed to? How can you be generous today? What are you grateful for?

You have received your fair share of criticism, lighthearted mockery, and actually have even been called a cult. Why do you think that is?
Cary Mosier: You come in here and see affirmations on the menu and there’s the new age vibe that people see. But it’s authentic for us. We want to promote a business that’s purpose isn’t just serving food. It goes beyond that. It’s about creating an environment where people celebrate the abundance in their lives and show appreciation for all that we have.

Ryland: When your attention is on gratitude, you are grateful and you feel blessed and you actually live in the experience of fulfillment. There’s a beautiful quote that’s in the artwork of Cafe Gratitude that says: “Abundance can be simply had by consciously receiving what has already been given.”

Cause, really, we live in Venice Beach, California, we eat organic food every day and we have access to everything and anything. It would be warranted if we walked around saying, “Thank you, thank you! This life is amazing.” Because really, it is. And yet, human beings have an unlimited capacity to take things for granted. But they also have an unlimited capacity to be grateful. 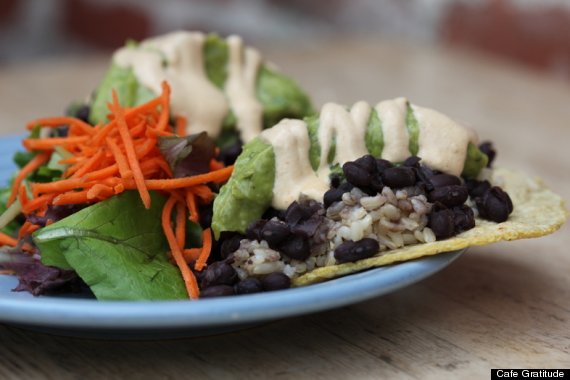 Based on your success, there’s clearly a real appetite for this kind of community -- both in Los Angeles and up north in San Francisco.
Ryland: Essentially the biggest cause of suffering in all of humanity is a sense of feeling disconnected. Any place that’s practicing more connection, more authenticity, more intimacy – we’re starving for that because we live on our separate houses and our separate cars and the culture is very divided and there’s not a lot of nurturing and community.

Cary: That’s why yoga has blown up so much. Granted, on one level, it’s exercise. But on a larger level, it’s a connection with your inner-self. Twenty years ago, the majority of Americans weren’t doing yoga and tapping into the conversation of “what’s it like in my head” and “where’s my attention?”

And it’s why Cafe Gratitude gets called a cult. Some people say, “What the hell are you talking about? Just serve food, bro.” And that’s okay. If you want to come in and have a healthy vegan meal – absolutely. And if you come in and find a deeper significance around the environment, the people and the type of food, then that’s available as well.

We thought can we have things on the menu that have people think about the words they use? Like why does it say I Am Connected? That has nothing to do with food. We could have just called it the guacamole and chips. But it sparks a conversation. 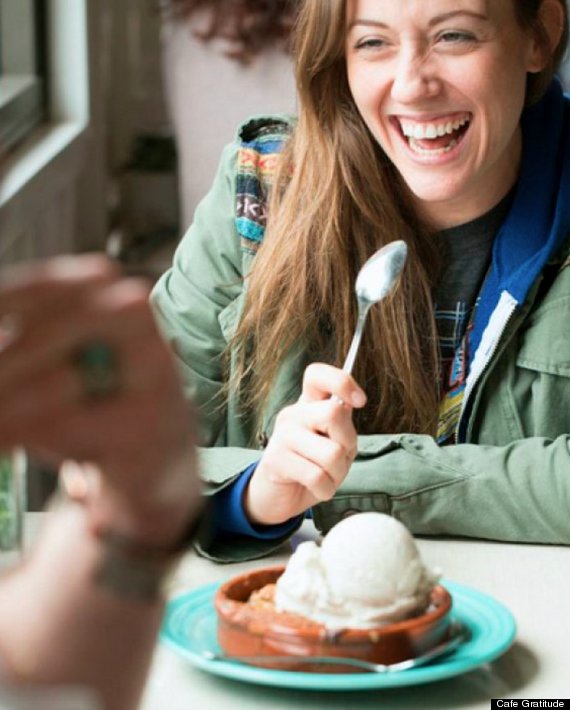 How do you come up with the affirmations for each item on the menu?
Cary: It’s usually playful. At this point, it’s a complete lack of creativity. It’s like what affirmation haven’t we used yet?

Ryland: Some of the original ones were simple. There was the pure salad, which was just greens, seaweed, avocado and cucumbers. It’s the cleanest possible meal. So we named it I Am Pure. We used to have a seaweed salad called I Am Giving, and the idea is that the ocean is one of the most giving things on the planet.

Cary: I’m the cynical, sarcastic one. So I like to make it cheeky. I think I put I Am Crunchy on the menu.

Ryland: The idea was people will come in for the food and we’ll give them a little uppercut of transformation and a little love and little warmth and a little shift in their attention and see if maybe that ripple effect will make a difference. It is all about shifting out attention from the glass half empty to the glass half full. 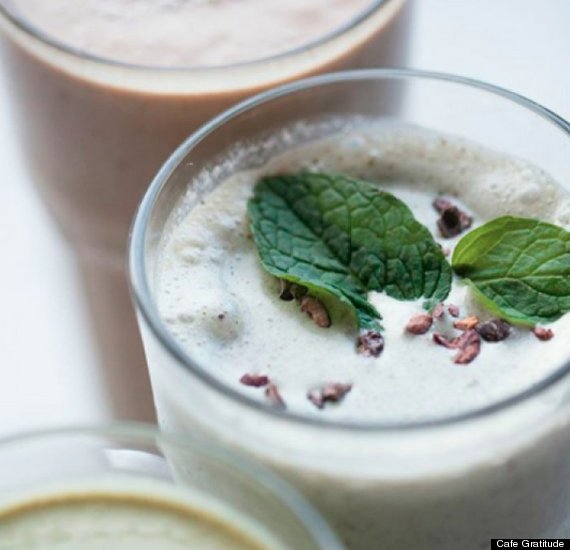 You weren’t always on this path. What were you doing for work before Cafe Gratitude?
Ryland: I was living in LA and my sister and I were running a recording studio. That was right when the recording business kind of tanked. It was a completely different life and I was very different. I was wearing Fubu jumpsuits and a Puerto Rican chin strap.

Cary: He walked with a limp and had an accent. He was living in the hip hop world. It was hilarious.

Did you enjoy the work or did you feel like you were meant to do something else with your life?
Ryland: Bringing Cafe Gratitude to LA has been a complete personal triumph for me. It was a crusade of sorts, because I had been completely eaten up by Los Angeles. I had lost my sense of self. I got into things that were not of my ethic and were not of my highest intention or highest self. We got into a business of wheeling, dealing and hustling.

I had a big revelation that I was in LA trying to prove to my dad that I could make it on my own. But then I saw that what my family was already doing up north was my complete self-expression -- creating community in the workplace, serving healthy food and inspiring people to take on their life, health and well-being.

How did you come to that realization?
Ryland: It came through me looking very transparently at what my resistance was about. Why would I want to do what they’re doing, but not want to do it with them? And I saw that it was a complete pride thing.

Cary: I had a similar moment in my own life. I was in the Navy, actually. It was totally not my scene. I did that for a year, then went to film school and started working at Cafe Gratitude. It became so successful and we were starting to expand, so I decided I wanted to help open up the other restaurants. 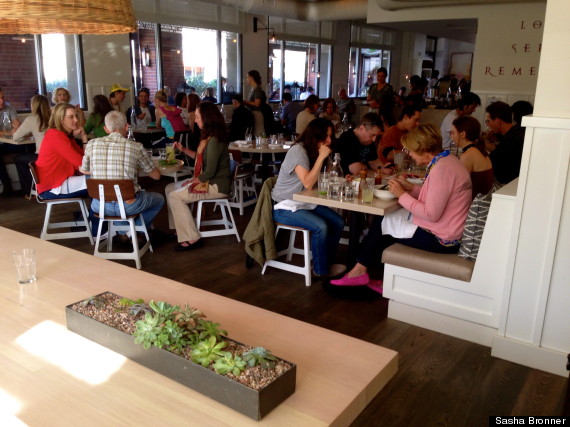 What’s the biggest challenge in running this business on a day-to-day level?
Cary: Keeping the bigger vision in mind and reminding myself about everything that is working, even when it feels like everything is not.
Ryland: Managing personalities, keeping people inspired, keeping a handle on all the moving parts and delivering a consistent service to over 1,200 people daily in Los Angeles alone.

What is your definition of success?
Cary: Being happy.
Ryland: Success is how much love can we give in this lifetime? One thing that Cafe Gratitude seeks to do is remember the ageless tradition of the dinner table. This was a place where we sat with our family and loved ones and enjoyed a meal after giving thanks. This tradition has been mostly forgotten in our fast-paced world. We are bringing it back through serving healthy organic food and asking a question like, “What are you grateful for?” 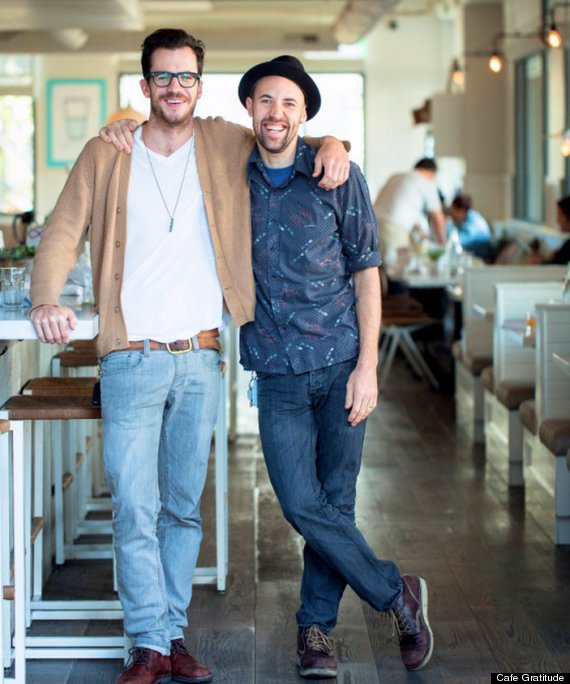 Quinta Brunson, The New Face Of Olay, Calls Her Achievement A ‘Pinch Me Moment’