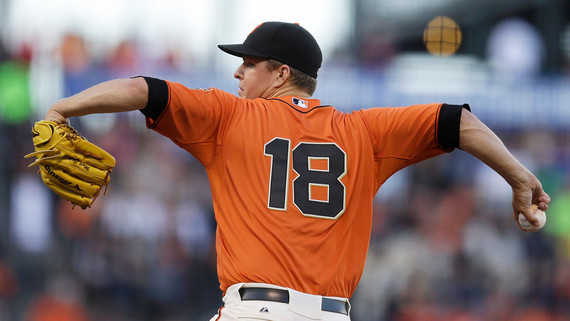 San Francisco, CA - It was a pitcher's duel through the first four frames. Matt Cain returned to the mound after his second stint on the disable list this season. Cain was probably the best he's been all season, he retired the first twelve batters he faced and held the New York Mets scoreless through five innings.

Cain tossed seven innings in the Giants 4-2 win over the Mets. He allowed two hits, walked one and yielded one home run. Cain put his first runner on base with a walk and had his no-hitter broken up in the sixth.

"He was sharp," said manager Bruce Bochy. "What a great job. He misses three turns in the rotation, goes out and throws the ball like that. All his pitches were crisp and his command was good."

Curtis Granderson was issued a free pass to leadoff the fifth. Andrew Brown followed by grounding into a double play and cleared the bases. San Francisco rallied two double plays after the first two batters got on base.

Ruben Tejada singled to lead off the sixth and broke up Cain's "no-no." Travis d'Arnaud grounded into a double play to clear the bases again. David Murphy's two-run homer in the seventh gave New York the lead but that didn't last. In fact, the Mets scored no more runs for the remainder of the game.

"It felt great," Cain said. "Buster and I got that fastball working pretty well today. I think the big key today was getting that fastball and throwing strikes."

"He was really good," Posey said. "I thought the fastball had as much life on it as I've seen in awhile. I think what was encouraging was the off-speed stuff wasn't as sharp as it can be. Definitely some positive stuff."

Both Brandon's worked together to knock the first runs in the fifth and the seventh. Brandon Hicks hit a triple that bounced off the center field wall with one out. And Brandon Crawford followed with a sacrifice fly to give the Giants the 1-0 lead.

Crawford tied the game 2-2 with a single up the middle, scoring in Hicks who was issued a free pass. Hicks advanced to second on a wild pitch before scoring on Crawford's single. Those two carried the offense while batting 7th and 8th.

"We have quite a quinella with these two," said Bochy.

"That was my mistake. I shouldn't have let Crawford get anything to hit," Jon Niese said. "Both those runs, I made mistakes, and he put together some good at-bats. With him being the only lefty in the lineup, I shouldn't make those mistakes."

Posey went yard with a two-run homer to center field and gave San Francisco a 4-2 lead in the eighth. He snapped a 93 at-bat homeless drought. This marked his first home run since May 3rd at Atlanta and his first homer at home since April 29th against San Diego.

"Fortunately, I got a good pitch I could handle, and it went out," said Posey.

Notes - They have the best record in the Majors, the Giants have a two-game lead on the top two American League teams, the Oakland A's and the Toronto Blue Jays. A month away from the first half of the season coming to an end and San Francisco continues to play good baseball just as they did to start the season.

"We don't look at the standings at all," said Giants manager Bruce Bochy. "They've done a great job of how they handle both wins and loses and I think that plays a huge part in our wins."

San Francisco became the first team to reach 40 wins in the Majors. They didn't win their 40th game last season until July 6th. The Giants have won three straight and 11 of their last 14. It's safe to say the team's chemistry is very good. San Francisco has scored a Major League best 47 runs in the 1st inning, three more than the Blue Jays, who rank with 44.

"We're just playing," Michael Morse said. "And that's the good thing about our team. We're not doing anything out of the norm, we're playing with blinders on and everyone is playing their game."

"We obviously all know we're playing well...," said Buster Posey. "We're just having fun, trying to go out and play good defense and get some timely hits. It's a good feeling right now, way better than last year. It's fun to come to the park when your playing this well."