Okay, let's sort out what's going on with the U.S. Embassy in Cairo's Twitter feed, shall we? Because there's a lot of weird reporting coming in the wake of the embassy's decision to temporarily shut down its Twitter account.

First of all, let's be clear: it is the U.S. Embassy in Cairo's Twitter account that was briefly shut down, not the actual U.S. Embassy in Cairo. There is a big difference! Apparently, Fox News' Greta Van Susteren got five words into a 14-word tweet from the Associated Press and posted an item on her Gretawire blog suggesting that the Embassy itself has been shut down. Van Susteren was gently urged by many people on Twitter to take another look at what the AP was reporting -- you know ... really stick with it this time, all the way through to the end -- and perhaps correct this. She's subsequently done so, which is good news, because what she originally posted sure looked comical: 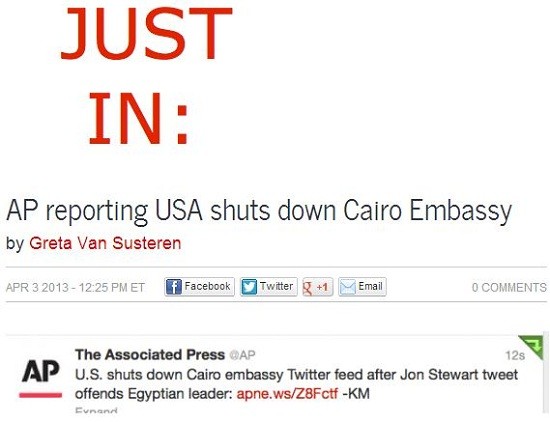 Okay, let's move now to the Associated Press' report on the matter:

The U.S. Embassy in Cairo has at least temporarily shut down its Twitter feed following an unusual diplomatic incident involving "The Daily Show" host Jon Stewart and the Egyptian government.

Okay, let's be clear about this, too. There was not a "diplomatic incident involving 'The Daily Show' host Jon Stewart and the Egyptian government." This is a wildly melodramatic depiction of what actually happened, and the Associated Press should know, because the next paragraph gets the story straight:

U.S. officials say the embassy's Twitter account was taken offline on Wednesday after Egyptian authorities objected to a tweet containing a link to a Stewart monologue this week. Stewart mocked Egypt's president for the arrest of a high-profile satirist. The officials spoke on condition of anonymity because they were not authorized to discuss the matter publicly.

So, to review, Jon Stewart offered his support on Monday night's edition of "The Daily Show" to Bassem Youssef, an Egyptian satirist who uses Stewart and his show as a model to lampoon Egyptian politics. This is not, strictly speaking, an example of "Jon Stewart causing a diplomatic incident." It was the U.S. Embassy in Cairo that caused this "diplomatic incident," when it approvingly tweeted out a link to Stewart's segment.

I don't know why the AP implies otherwise in its lede; it gives the story some up-front hype that can't be delivered upon.

Josh Rogin on Foreign Policy's The Cable blog has the sober, accurate depiction of what happened. He correctly notes that this "diplomatic incident," such as it is, was instigated by whoever runs the Cairo Embassy's Twitter account, subsequently leading to a brief social media dustup with whoever runs the Twitter accounts for the Egyptian presidency and the Muslim Brotherhood (doing business as the Freedom and Justice Party). A State Department official informed Rogin that "the decision to take down Embassy Cairo's Twitter page was made by U.S. Ambassador to Egypt Anne Patterson without the consultation of the State Department in Washington," and that the State Department in Washington subsequently urged the embassy to "to put the page back up, lest it appear that the United States is caving to the online pressure." And the Twitter feed for the embassy was subsequently restored, sans Daily Show tweet, at 12:20 p.m. today.

Just go read Josh Rogin's whole thing, okay? Suffice it to say, no one is shutting down the U.S. Embassy in Cairo and Jon Stewart has not personally touched off a diplomatic contretemps with Egypt.

If there's a story here, it's that the Cairo Embassy can't seem to decide if it wants to continue on tweeting with a voice Rogin describes as having a "combative character" or not. If they're just going to be yanking their account offline every time that "combative character" leads to conflict, perhaps they should rethink this!