Caitlin Flanagan has done it again. In her cover story for the March issue of The Atlantic, one of America's finest writers takes on one of the most heavily fortressed bastions of the American male -- the college fraternity -- and Flanagan most assuredly scores some direct hits. 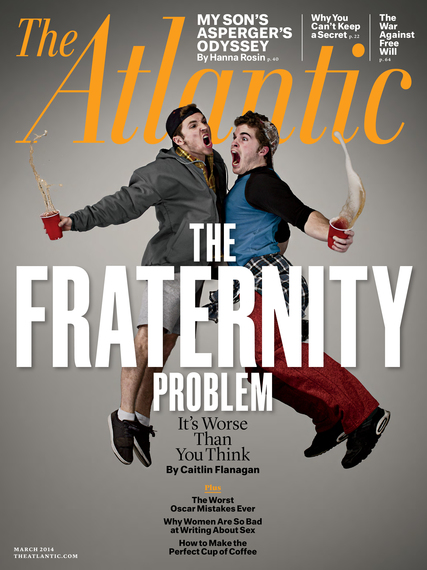 This year-long investigation into a host of lawsuits involving injury, sexual assault and death reveals that fraternities are not only more powerful than the colleges and universities that host them, but are especially adept at shifting blame, disavowing members and leaving the parents (and often their homeowner insurance policies) holding the bag.

Flanagan begins the piece with signature style -- a 20-year-old guest at the University of West Virginia's Alpha Tau Omega fraternity who decided it was a good idea to stick a bottle rocket up his rectum and light it, causing a fellow student who was filming it on his cell phone to fall off a deck -- and quickly dispels the common notion that hazing is the most dangerous part of fraternity life. She focuses on binge-drinking and sexual assault as the more frequent subject of lawsuits as well as the astonishingly high incidence of falls from windows, decks and balconies.

More than 60 people, most of them students, have died in incidents linked to fraternities since 2005 and the number of serious injuries, assaults and sexual crimes that take place in Greek houses is much higher.

And good luck winning a lawsuit. Her examination of the strength, strategy and sheer staying power of the fraternity in light of these increasingly dangerous and life-threatening circumstances on American campuses should give any parent with a college-bound child serious pause.

The piece is lengthy, detailed and riveting. It includes a damning indictment of the increasingly competitive fun factor of college life that drains family finances as well as highlights the fact that fraternities are currently the largest organization in the country providing alcohol to underage students. There is a compelling story about a sexual assault at Wesleyan University of all places, and account after account of how drinking combined with the ever and always knuckleheadedness of youth has caused fraternities in America to both batten down and lawyer up.

Here is my interview with Flanagan:

Nancy Doyle Palmer: Excessive drinking is beyond a factor in this issue, it drives the bus. How new are these extremes and do you see any change anytime soon?

Caitlin Flanagan: College drinking is tracked most closely by the Monitoring the Future Study, based at the University of Michigan. They note two interesting trends in terms of college drinking: one that the amount of college drinking has been essentially stable for a number of years (slightly down for males, and slightly up for females, balancing each other out). But -- among the subset of kids who binge drink, the numbers of drinks they consume is much higher than had previously been assumed. Add to this the widely acknowledged fact that participation in fraternity life correlates with heavier and more regular drinking -- and to the anecdotal evidence of bad incidents at fraternity houses -- and we begin to see a pattern. Not all fraternity members are binge drinkers, and not all binge drinkers belong to fraternities -- but extremely heavy drinking and fraternity life go hand in hand.

Nobody -- and I mean nobody -- seems to know what to do about this. College presidents are beyond frustrated. Some have signed onto the Amethyst Initiative which proposes lowering the drinking age to 18, so that college drinking will move back on campus, where it can be better supervised. But few drug and alcohol experts think that's a good idea -- all of the research and evidence says that 21 is better for kids. It's a huge problem -- and there is nothing promising on the horizon, I'm afraid.

NDP: Are sororities anywhere as strong a factor in this story as fraternities? And do you see this issue of sexual assault a backward slide in feminism and respect towards women or is it more fuelled by the drinking?

CF: Sororities are not allowed to have alcohol in their houses, or to host mixed parties -- so they have far fewer incidents in their houses. Sorority formals are typically held in rented venues -- and the stories of what goes on at some of those events are pretty eye opening. But they are not associated with the kind of danger, injury and death that we see so often in the fraternity world.

What I see in the majority of these fraternity sexual assault cases are two kids who are blind drunk at the time the incident happens. There's also a traditionally macho culture at many fraternity houses, which probably makes them more dangerous places for young women -- but it's that very machismo that attracts so many young women to the houses in the first place. Macho culture, extreme binge drinking, hook up culture, and (in some cases) predatory behavior -- they all collide at the fraternity party.

NDP: Really, why are 18+ boys such knuckleheads and what is the preoccupation with putting things in their butts?

CF: Right??? Fraternity paddling emerged from the tradition of caning -- getting hit on the butt with a cane -- that existed in British public schools (meaning private schools) and the American military academies. I think it was meant to be at once painful and humiliating, because of its association with the corporal punishment of small boys. Somehow the canes turned into paddles. Because you're a pledge, you're like a child and can be treated as one. The whole thing always seemed pretty kinky to me, as it does to most outside observers. (In general, fraternity hazing got more violent at two junctures: after the civil war and after the second world war, reflecting the role fraternities play in the substitution of college for military experience in young men's lives).

But today we have Jackass culture and YouTube to take extreme acts of physical unpleasantness - including that which involves das booty -- to new levels. There are plenty of YouTube videos of kids blasting bottle rockets out their butts, for example. The whole Jackass culture -- of being extreme, of volunteering for painful and humiliating experiences, of engaging in acts that need a lot of alcohol or drugs on board before you take part in them -- all of that is a perfect match for fraternity life. As for the current fraternity craze of the alcohol enema -- don't ask me!

NDP: What kind of conversations should parents be having with their sons who are headed for fraternities, and what should they tell their daughters who are headed there for the parties?

CF: Sons: I was repeatedly told by people inside the fraternity industry that there are a significant number of kids who show up at college having been bailed out of every single high school scrape by their parents. If they got in trouble at school, the parents fought to make sure they weren't disciplined; if they got a bad grade, the parents argued it with the teacher; if they cracked up the car, the parents paid for the repair and the higher insurance; if they got in trouble with drugs and alcohol, the parents smoothing things over. If that has been your parenting style, you should adamantly refuse to pay for your son to join a fraternity, because he has the belief that rules don't apply to him, and he is going to set about flouting the fraternity's risk management policy from day one, and may very well get himself into a lot of trouble. But if he's an appropriately mature kid, who has learned from high school mistakes and who is arriving at college without any problems with drugs and alcohol -- he may do very well at a fraternity. In other words, it's as much about the young man who is joining the frat as it is about the frat itself.
Daughters: As one source in the piece says, "Until proven otherwise, fraternities are very dangerous places." For young women who want to combine binge drinking and fraternity parties, there may be a high price to pay. To put it mildly: a fraternity party is not a good place for a young woman who is blind drunk and who doesn't have sober companions.