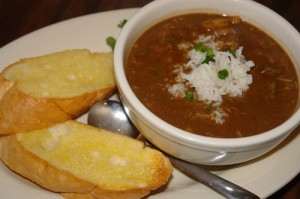 Compared to Louisiana, other states have it easy. Sure, Louisiana is home of the Big Easy and we locals are known for our joie de vivre, but we are also parents to some of the most precious cuisines in the world. While we may, on occasion, have one too many Bloody Marys at Sunday brunch or add some "punch" to our milk, we don't take this responsibility lightly. Even when away from the motherland, Louisianans still find ourselves bragging about and defending our pride and joy. Perhaps the most difficult task is explaining our food in a few short sentences. Of course, a Louisianan would prefer to sit down, put on a pot of coffee or pour a cold beer, and talk about it at length. However, we've come to learn that most people don't have the time to do that. So if you're versed on Louisiana history and culture, then all you really need to know is that Creole cuisine uses tomatoes, and proper Cajun food does not. That's how you tell a Cajun versus Creole gumbo or jambalaya. You can stop reading now. You're welcome. However, if you'd like to go a bit deeper, please continue reading so that you can learn why the terms Cajun and Creole that have become used so loosely and interchangeably when describing Louisiana food, are not at all the same.

A vastly over-simplified way to describe the two cuisines is to deem Creole cuisine "city food" and Cajun cuisine "country food." While many of the ingredients in Cajun and Creole dishes are similar, the real difference between the two styles is the people behind these famous cuisines. They say in order to really know someone, meet their family. The same goes for food. The best place to find authentic Cajun and Creole cooking is in homes across the state. Many of Louisiana's most talented chefs learned their trade from their parents or grandparents. Cajun and Creole are two distinct cultures, and while over the years they continue to blend, there is still a vast distinction.

Cajun
The word Cajun originates from the term les Acadians, used to describe French colonists who settled in the Acadia region of Canada, consisting of present-day New Brunswick, Prince Edward Island, and Nova Scotia. With the British conquest of Acadia in the early 1700s, the Acadians were forcibly removed from their homes in what become known as "Le Grand Dérangement," or the Great Upheaval. Many Acadians eventually settled in the swampy region of Louisiana, today known as Acadiana.

The Acadians were an extremely resourceful people who took full advantage of the flatlands, bayous, and wild game of South Louisiana and its proximity to the Gulf of Mexico to create a truly unique local cuisine. While many Acadiana residents today have German, French, or Italian roots, among others, their way of life is strongly influenced by the Cajun culture. As LSU history professor William Arceneaux puts it, "All Cajuns are Acadians, but not all Acadians are Cajuns." Along with its food, this rural area of Louisiana is famous for its Cajun French music and language. 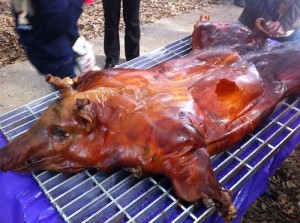 Without access to modern-day luxuries like refrigerators, the Cajuns learned to make use of every part of a slaughtered animal. When a pig is butchered, the event is called a boucherie. Boudin, a type of Cajun sausage which consists of pork meat, rice, and seasoning stuffed into a casing, also commonly contains pig liver for a little extra flavor. Tasso and Andouille are two other Cajun pork products that use salts and smoke as preservatives. Cajun food is famous for being well seasoned, which is sometimes misunderstood as spicy. Seasoning is one of the most important parts of Cajun cooking, and that comes from much more than a heavy helping of cayenne pepper. Most dishes begin with a medley of vegetables based on the French mirepoix. "The holy trinity of Cajun cuisine" utilizes onion, celery, and bell pepper (rather than carrots) to provide a flavor base for many dishes. Garlic is never far away from any stove, either. Paprika, thyme, filé (ground sassafras leaves), parsley, and green onions are also very common ingredients in Cajun kitchens.

Creole
The term Creole describes the population of people who were born to settlers in French colonial Louisiana, specifically in New Orleans. In the 18th century, Creoles consisted of the descendants of the French and Spanish upper-class that ruled the city. Over the years the term grew to include native-born slaves of African descent, as well as free people of color. Typically, the term French Creole described someone of European ancestry born in the colony, and the term Louisiana Creole described someone of mixed racial ancestry. 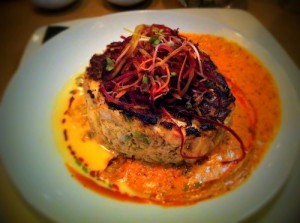 Like the people, Creole food is a blend of the various cultures of New Orleans, including Italian, Spanish, African, German, Caribbean, Native American, and Portuguese, to name a few. Creole cuisine is thought of as a little higher-brow or aristocratic when compared to Cajun. Traditionally, slaves in the kitchens of well-to-do members of society prepared the food, and with an abundance of time and resources, their dishes offered an array of spices from various regions, and creamy soups and sauces. A remoulade sauce, for example, which consists of nearly a dozen ingredients, would not typically be found in Cajun kitchens. Creole cuisine has more variety, because of the easier access Creoles had to exotic ingredients and the wide mix of cultures that contributed to the cuisine. That's why you find tomatoes in Creole jambalaya and not in Cajun jambalaya, or why you often find a Creole roux made with butter and flour, while a Cajun roux is made with oil and flour.

The only place to get true Creole and Cajun food is in Louisiana, or at least in the kitchen of someone from Louisiana. However, if traveling down South isn't in the cards, now you know a few tips that can help you determine if a dish is close to being authentically Cajun or Creole. Luckily, in Louisiana, true Cajun and Creole food will never stray far away from its roots. With each new generation of Louisianans, there is a vested interest in its history and culture, and a proud new set of parents. There is no one better suited to ensure that Louisiana food adheres to its traditions and reputations. And over 4.4 million people are fit for the job.

Related Links from the Menuism BBQ Blog:
• An Introduction of Barbecue Styles Around the United States
• Interview: Jay Ducote of Bite and Booze
• Yakinuku: The Ultimate Japanese DIY Barbecue