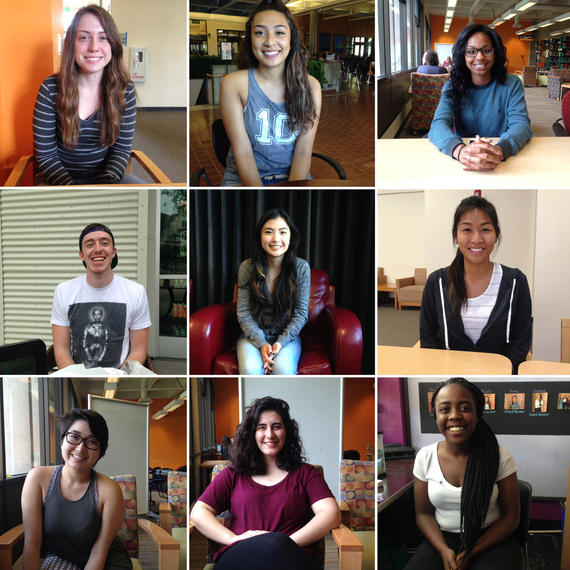 I took all of these photos. Some of the interviewees chose not to be photographed.

After posting "Dear Black Women," I received a lot of praise and congratulations. A lot of black women appreciated it, and many people who were of different ethnicities and/or genders told me that they could still relate. I was happy to hear that my writing had really affected some people. Then I came across these comments on my post. 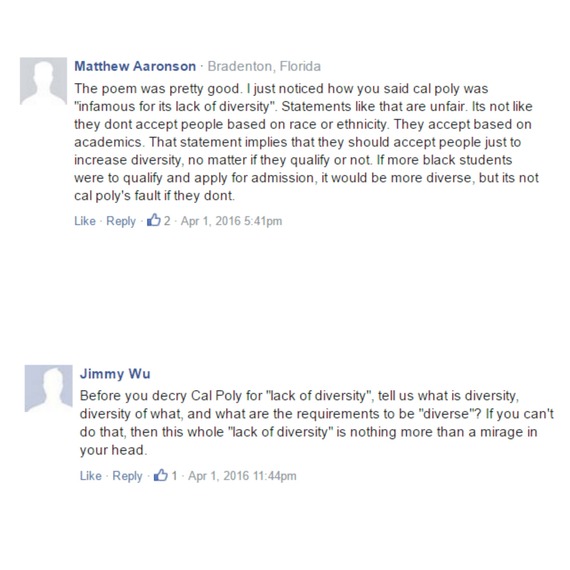 My first instinct was to clapback. But then I decided to calm myself, gather my thoughts, and say what I wanted to say without coming across as an "angry black woman." After a few days of thinking about these comments, and how to best respond, a lightbulb went off. I thought: what better way to discuss the diversity problem at Cal Poly than by interviewing Cal Poly students? That way, we can hear from a variety of students instead of just me. I then spread the word that I was looking for Cal Poly students of all ethnicities, genders, religions, sexual orientations, economic classes, etc. to do a short interview.

During the basic introductions, I asked the interviewees what they identify as. For example, I identify as a black woman, because, to me, those are the most important parts of my identity. These were their replies:

"I identify definitely as a feminist, a queer ally. I identify as a musician, athlete...and I'm mixed race. I'm half-black, and from my mom's side, I am Filipino and Spanish."

"A black woman--and 'black' first, because I think people see me--before they see my gender, anything--they see me as black... Black female engineer."

"My identity kind of stems on who I love and care about... I guess I'm just a caring person."

"I identify as a white bi woman."

"I'm half-Japanese and half-Irish, but I identify as American."

"I would say I'm just a black woman."

We then got on to the interview questions.

How would you define "diversity"?

Tyler Suarez-Brown. First year Comparative Ethnic Studies Major.
"Diversity is where anyone in the community can see someone that looks like them, or can identify with someone that has their same interests, or same core values."

McKenna Johnson. Fourth-year double-major in Anthropology and Geography.
"I think, in general, diversity just means bringing everyone who has a voice in the room and letting them be heard--and not letting some people's, let's say, volume, be higher than the others'."

Beatriz Pereira. Second-year double major in Theatre and Anthropology.
"I think, it's like, the most amazing aspect of being a human...diversity is such a beautiful thing."

What do you think about the diversity at Cal Poly?

Ryan Doebler. Second-year Theatre major.
(He laughs) "It's laughable. They definitely aren't doing their best at being inclusive of minorities or any other underrepresented group...It just feels like Cal Poly doesn't really care."

Braxton Cullors. Fifth-year Aerospace Engineering major.
(She laughs) "I think Cal Poly is definitely one of the least diverse places I've ever been to. I think it's almost uncomfortable... I feel like I have 'hi, I'm black' written on my forehead. And I don't feel that everywhere else, which is really weird."

Onessa Anastasio. Third-year Architectural Engineering major.
(She laughs) "I don't think that there's much diversity...everybody knows that Cal Poly's a white school, and you see it everywhere you go [on campus]."

What factors do you think contribute to Cal Poly's lack of diversity?

John O'Grady. Fourth-year Animal Science major.
"The economic climate here plays a factor, just because it is expensive to live here... Not to stereotype people based on their economic status, but I'd say the major demographic here is upper middle class."

Jennifer McClinton. Second-year Theatre major and Dance minor.
"... Faculty and teachers are primarily white as well. I took--we did this checklist [in class] where you check off things you identify with, and one of the questions was like 'are you confident that one of your teachers that you take a class with will be a teacher of your own race?' And I was like 'I'm not confident' because I've never had a teacher of my own race at Cal Poly.

Gabby Cole. First-year Animal Science major.
"I think it's a major factor [for perspective students] seeing that it's really not that diverse here, and I think that's driving people away from wanting to come here."

At what point would you be happy with the amount of diversity at Cal Poly?

Sara Edmonds. Fourth-year Business major.
"If you weren't surprised when you saw someone that wasn't white in your class."

Jennifer McClinton.
"When I could, ya'know, walk around and people don't have to identify me as just the way I look, and they don't have to point it out to me every time they see me...then I will look at Cal Poly and say that we are diverse."

How has Cal Poly's lack of diversity affected you personally?

Daphne Lei. Second-year Theatre major.
"I get home-sick so often. Very often. I always wanna go home...I miss the culture. I can't make jokes that I can make at home, because I feel like Cal Poly is insensitive to anything that's related to minorities."

Onessa Anastasio.
"It's starting to make me not want people to call me Filipino...I started to think: well, if this is something that's inferior--it makes me feel like I'm stereotyped just because the way I am; it makes me not want to be associated with being Filipino."

Braxton Cullors.
(I had been recording our interview, but I had to stop after asking Braxton this question because she got very emotional and started to cry) "...it just makes me sad because I can't make the friendships that everyone else can make, because of my skin color...I feel like people can't relate enough to me to approach me...it's like a mental battle every single day."

The lack of diversity on Cal Poly's campus is a real and serious issue. This quick snapshot into the lives of students shows that it really does have an affect. College is supposed to be "the best time of our lives," yet many Cal Poly students spend their years wishing they had gone to another school. The diversity problem goes even deeper than that. As you can see from just these few interviews, it affects students' mental health, and can lead them to struggle with accepting themselves and their culture. Because of this, I will not take back my comment about Cal Poly being infamous for its lack of diversity. I am going to keep talking about this problem and keep spreading the word until a solution is found.