It would be Ayn Rand's dream come true: separate states for rich people and poor people.

A proposal to split California into six states, introduced by billionaire investor Tim Draper in December, would formally create state lines between the haves and the have-nots.

"You'd be creating one exceptionally wealthy state and others with dire poverty," Corey Cook, a political science professor at the University of San Francisco, said to The Huffington Post. "You'd create massive inequality."

While the plan has little chance of becoming a reality, it's just the latest troubling sign that the rich are leaning in to the rising levels of inequality in the U.S. and increasingly seeking to break away from the middle- and lower-classes, depriving them of tax revenue and choking off much-needed resources. 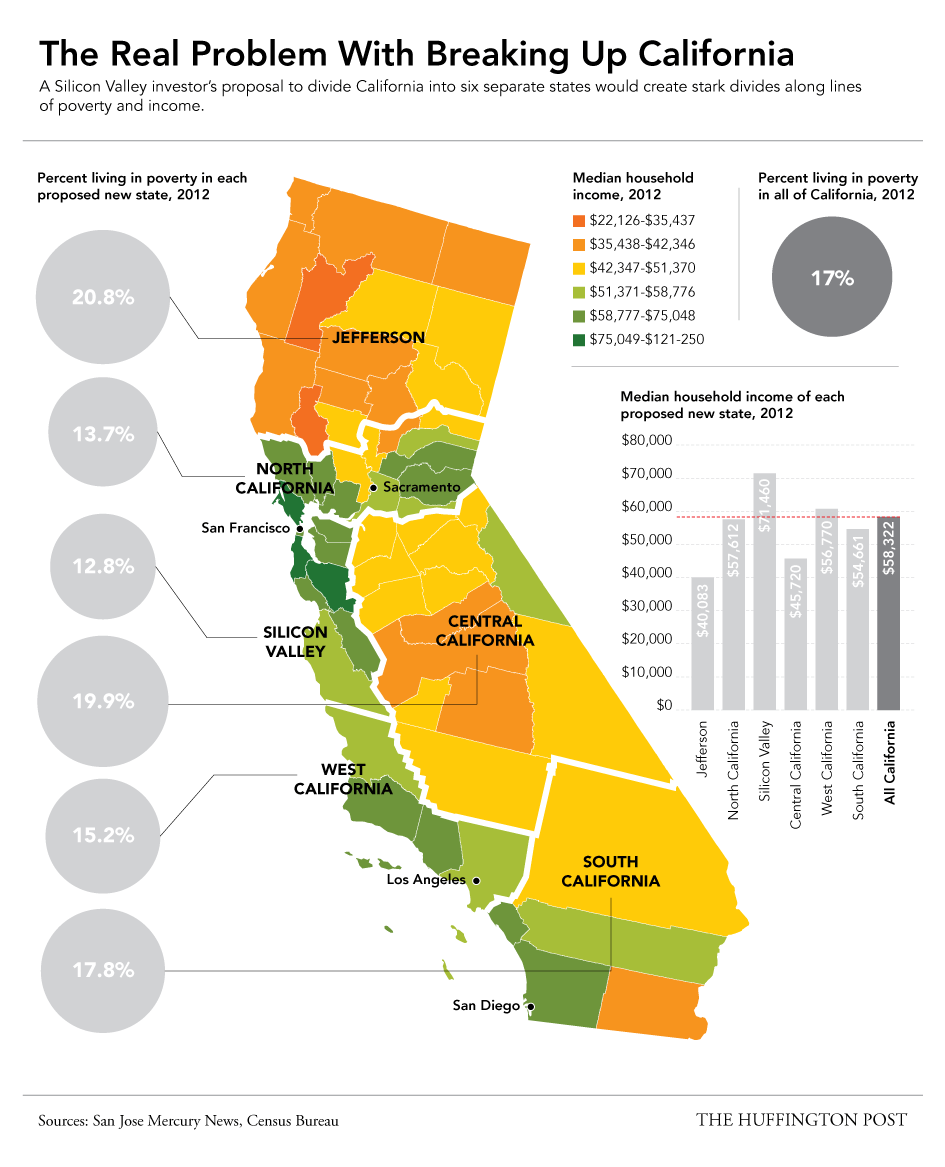 Draper told HuffPost that he initially dreamed up the proposal because California is so large that it has become "ungovernable." He said that his plan would help poor parts of the state because their unique needs would be better heard by smaller, local governments. He has until mid-July to collect the 807,615 signatures needed to get his proposal on the state's 2014 ballot. He hasn't started gathering signatures yet.

Perhaps nowhere in the U.S. is income inequality as extreme as in California. One in four of its citizens live in poverty. Yet the state has the highest number of ultra-rich people in the country. The state deeply needs the tax revenue from the wealthy to support those who are less well-off. Under Draper's plan, this critical tax revenue redistribution would be lost.

Splitting up the state would "widen the chasms in education, incarceration and wealth that are already greater than they were 25 years ago," said Larry Gerston, professor of political science at San Jose State University.

Draper isn't alone in wanting to segregate rich and poor. Airlines are increasingly offering their wealthy clients more physical distance from the masses in coach. United and Delta now have private airport suites for first-class travelers, and will drive high-end passengers from one gate to another in luxury cars.

And then there are school districts. In the past two years, wealthy neighborhoods in several states have launched campaigns to break away from school districts that include poor communities. This has taken place in Louisiana, Georgia, Alabama, Texas, California and Tennessee, and some of the efforts have been successful.

Elsewhere, many affluent Americans prefer to live in exclusive neighborhoods. It's common for wealthy residents of Southern California and Silicon Valley to live in gated communities, which often employ private security rather than relying on public police officers. And the security may be for a good reason. In the non-gated Lindenwood neighborhood, near Silicon Valley, average home prices exceed $7 million. Vandals recently spray-painted black graffiti on the 1 percent's walls, garages and white picket fences.

In the last decade, several cities in Georgia have broken off from the state and become largely autonomous, with many locals citing a poorly run state government. The first city to do so was the affluent Sandy Springs, where almost all public services have since been privatized. Without needing to provide to poverty-stricken surrounding communities, Sandy Springs, where the average family income is $169,815, can now reportedly keep taxes lower and stay out of debt.

The tech world is particularly keen on leaving government behind to create its own utopia. Investor Peter Thiel has raised over $25,000 to build the world's first floating tech island, free from government constraints. Google CEO Larry Page wants to "set aside a part of the world" for regulation-free tech experiments. And Balaji Srinivasan, the co-founder of genetics company Counsyl, calls "Silicon Valley's Ultimate Exit" from civil society inevitable, and advocates for a techno-utopian island in the ocean. Meanwhile, the "campuses" of Google, Facebook, Apple and other Silicon Valley tech giants are essentially autonomous urban centers where an employee can see a dentist and take private buses to and from work.

While Draper's plan is more democratic than building an island free of the world's problems, critics say it reflects the same mentality of "figure it out yourself" instead of "we're in this together." "It’s a way for some folks to get rid of the riffraff," Gerston said. "Let's do some surgery and cut out this part and that part so that now we only have this nice part that we like."