This story was first published by Yale Environment 360.

Solar farms are blooming across California’s deserts, wind turbines are climbing the Sierra, photovoltaic roofs are shimmering over suburbs, and Teslas are the Silicon Valley elite’s new ride. A clean energy rush is transforming the Golden State so quickly that nearly a quarter of its electricity now comes from renewable sources, and new facilities, especially solar, are coming online at a rapid rate. Last year, California became the first state to get more than 5 percent of its electricity from the sun.

With its goal of 33 percent renewable energy by 2020 now within reach, Governor Jerry Brown recently raised California’s bar, ordering the state to cut its greenhouse gas emissions to 40 percent below the 1990 level within the next 15 years — the most ambitious target in North America. To meet the new directive, planners say Californians will need to step up their energy transition even more: doubling energy efficiency, boosting electric transportation, and getting at least twice as much of their electricity from renewables. Energy experts caution that it will take effort, but they say it’s doable.

It’s difficult to remember that just 15 years earlier the state was experiencing an energy meltdown. Electricity prices skyrocketed, supply crashed and blackouts rolled, due mainly to a disastrous deregulation attempt and unscrupulous market manipulation. Fast-forward to 2014, and the state’s renewable capacity grew to an estimated 21,000 megawatts, including more utility-scale solar than all the rest of the states combined.

So how did California go from chaos to clean power leader in such a short time? And where does it go from here?

“Fifteen years out of a crisis — that’s kind of unprecedented,” said Daniel Kammen, director of the Renewable and Appropriate Energy Lab at the University of California, Berkeley. “For the world’s seventh-biggest economy, to be in such a solid and good climate position in a decade and a half is remarkable.”

California’s phoenix act stems from a combination of favorable geography, innovative policies, and businesses that saw the benefits of clean energy investments, Kammen said. Reeling off a list of California solar companies, he said, “All of these companies are creating wealth … and that is the most fundamental part of the whole equation.”

With bipartisan support, state legislators a decade ago enacted an ambitious Renewables Portfolio Standard requiring that 33 percent of electricity sold in California come from renewable sources by 2020. Governor Brown has called for that goal to be raised to 50 percent by 2030, and his administration has expanded efforts to boost energy efficiency and to significantly increase the use of electric vehicles and renewables, among other measures.

Wind energy production has doubled since 2009, and today California generates nearly 6,400 megawatts of wind power, providing around 7 percent of the state’s electricity. Massive new solar farms are also coming online, including two 550-megawatt photovoltaic plants added last year. By the end of 2014, California had roughly 5,400 megawatts of utility-scale solar installed and several more facilities, including a new 579 megawatt plant, are slated to open by the end of next year. California also leads the nation in small distributed, or “rooftop,” solar, with more than 2,300 megawatts now installed, and analysts predict continued strong growth through 2016.

On top of that, the state has ample geothermal energy production, with expansion on the way. All told, according to the California Energy Commission, commercial renewable energy facilities in the state, including small hydropower, now generate enough clean electricity to power more than 7 million California homes — and that doesn’t include home solar and other smaller, on-site production.

The push toward renewables has bumped up electricity prices — Californians pay around 14 cents per kilowatt hour across all sectors, compared to a little over 10 cents nationwide, according to 2015 figures from the U.S. Energy Information Agency. But thanks to a mild climate and successful energy efficiency programs, residents’ monthly bills are actually among the lowest in the nation — Californians rank 49th in energy use and 46th in per-person spending on electricity.

But as California’s clean power goals rise, new capacity could begin to slow. Some planned large projects are now on hold due to financial problems. Others face environmental challenges, such as threats to bird flyways and desert habitats. Large-scale solar plants, particularly those using solar thermal technology, are losing appeal to investors as photovoltaic panel prices plunge. And utilities, having largely reached their current renewable procurement targets, have few new projects in the pipeline. What’s more, the federal solar investment tax credit program for new utility projects drops from 30 percent to 10 percent after 2016, and ends completely for individuals.

Despite these obstacles, a number of enterprising alternatives are emerging.

In the past few months, both Apple and Google have announced they are developing their own grid-scale renewable energy projects. Apple is partnering with FirstSolar to build a 280-megawatt solar farm not far from its Silicon Valley headquarters. The facility, slated for completion next year, will power all Apple stores in California, as well as the company’s offices and a large data center — plus deliver 150 megawatts to the grid. Not to be outdone, Google has bought into a wind project to power its huge Mountain View campus. The company plans to replace outdated turbines that are inefficient and hazardous to birds with fewer, higher-efficiency, bird-friendly machines. 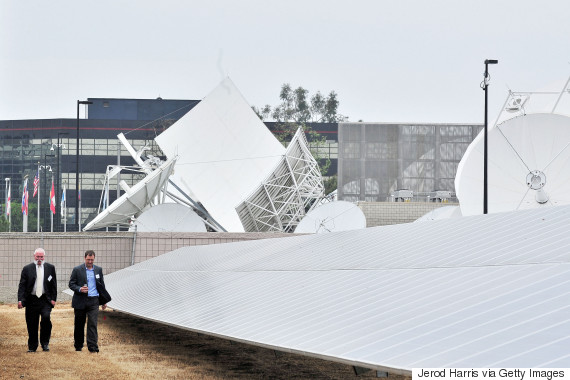 DirecTV has built a solar farm at one of its California offices. Its television technicians now offer solar energy packages when visiting customers' homes.

Another new approach is designed to stimulate small, local renewable energy projects. Under this program, Community Choice Aggregation (CCA), cities and counties contract with renewable energy producers to tailor their own clean energy supply. Electricity is still delivered through the area utility, which charges a transmission fee, but residents can choose whether to receive up to 100 percent clean energy from the CCA.

The state’s first CCA, Marin Clean Energy, opened in 2010 and now serves about 165,000 customers. The program keeps costs down by buying directly from several small, local energy projects it helped develop, including a solar panel array on city airport hangars and biogas from a county landfill, as well as agreements with commercial solar, wind, and geothermal producers.

California’s green energy aggregation model is now spreading to other states, including one starting up this summer in New York’s Westchester County. The Los Angeles-area city of Lancaster this month launched its own CCA, which, along with Sonoma County, brings California’s total to three, with more in progress.

In a testament to clean energy’s bipartisan appeal in California, Lancaster’s Republican mayor, R. Rex Parris, dreams of making his city “the Silicon Valley of Clean Energy.” His initiatives include requiring solar panels on all new homes in this fast-growing community and luring an electric bus manufacturer to town.

“We’ll be net-zero this year,” Parris said, enthusiastically. “We’ll be producing more electricity than we use."

In addition to slowing global warming — a cause Parris considers critical — he said becoming a clean energy community makes fiscal sense. The CCA’s direct purchase from solar farms will save Lancaster users 15 to 30 percent on their energy bills, he said.

“The free market is working,” Parris said. “There are my Republican principles!”

Meanwhile, unlikely allies from universities to county dumps are banding together and taking a new look around their properties, with an eye to unused space that can be repurposed for clean energy production. Earlier this month, standing on a closed landfill near San Francisco Bay slated to sport 19,000 solar panels by next year, U.S. EPA administrator Gina McCarthy said she hopes a pioneering Regional Renewable Energy Procurement arrangement by a group of public agencies will become a national model. Under that initiative, solar panels will be installed at 186 sites such as fire stations, city halls, libraries, college campuses, and sanitary districts across four northern California counties to produce energy than can be fed into the grid.

California’s energy transition still faces some daunting obstacles. A massive influx of new energy threatens to overwhelm the current transmission system. The sporadic nature of wind and solar poses a special challenge. In addition, the remote location of many new energy producers means the state will have to extend electrical wires.

The grid is already starting to experience oversupply episodes when wind and solar produce unexpected bursts of power, which forces the grid to shut down its energy feeds, said Steven Greenlee, a spokesman for the California Independent System Operator (CAISO), the state’s utility regulator. That wastes energy.

To address these problems and achieve California’s goals for a new energy future, CAISO envisions fleets of private and mass-transit electric vehicles that serve as batteries on wheels — plugging in and soaking up excess current when the load gets too high, and feeding it back into the grid through special charging stations when supply drops. The plan also calls for retrofitting the state’s sluggish old conventional power plants or building new ones that can ramp up production quickly when the sun sets or the wind dies, then stop when these sources become active.

A third component — a regional electricity-sharing grid where California and its neighbors can cut costs and increase efficiency by offloading surplus or acquiring extra within minutes of peak demand — was launched last year. So far, Western Energy Imbalance Market members include parts of Oregon, Washington, Utah, and Wyoming, in addition to California.

Reaching the state’s aggressive new energy target likely will raise costs. A recent study by the consulting firm Energy+Environmental Economics and Lawrence Berkeley National Laboratory estimated that the steps needed would add an average of $14 to monthly household bills. But Berkeley energy professor Kammen points out that the effort also will spur innovation, stimulate the economy, and create jobs.

Lancaster Mayor Parris agrees. “Once you release the creative forces like that,” he said, “it doesn’t stop.”