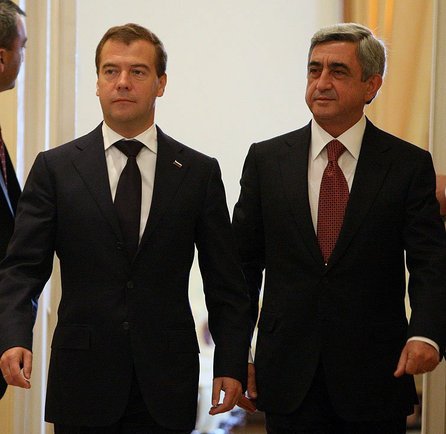 A thousand ethnic Armenians in the diaspora enclave of Glendale, California, held a protest recently to demand that their homeland free political prisoners.

Ethnic Armenians in the United States and Europe are politically active, so a demonstration to call attention to something going on in their homeland was nothing new.

Except for one thing: Some in the Glendale crowd held signs calling for Armenian President Serzh Sargsyan's resignation.

The demands for his abdication came on the heels of an opposition group's seizure of a police station in Armenia that focused world attention on the country for two weeks.

The stand-off in the capital of Yerevan ended when the remaining 20 of the 31 members in the armed group that seized the station on July 17 surrendered on July 31.

Armenian officials and some political analysts appeared to have been caught by surprise when street protests supporting the station occupiers grew as the occupation continued and morphed into shows of general dissatisfaction with the government.

The fact that the station occupants were members of a political fringe group -- the Founding Parliament Party -- had led many observers to believe that the raiders' anti-government action would have little support.

They didn't count on those who dislike the Sargsyan regime using the station occupation to stoke a broader movement against the government.

The occupiers had demanded that the government free the leader of Founding Parliament, Jirair Sefilian, who was arrested in mid-June of 2015 on charges of plotting a coup. The raiders had also demanded Sargsyan's resignation.

The regime made the situation worse by using excessive force against many of the protesters.

Human Rights Watch and other organizations documented the abuse. Police stun grenades burned some protesters and unleashed hard-plastic shrapnel that penetrated the flesh of others. And police beat and kicked demonstrators, breaking some protesters' bones.

The Glendale demonstrators took to the streets to protest the Sargsyan regime's suppression of political dissent.

While the catalyst for the march was the brutality used against the station-occupation supporters, the demonstrators wanted to convey the bigger-picture message that the Sargsyan regime has consistently tried to suppress dissent, and needs to stop.

"People just go on the street, and they get arrested," Glendale protester Albert Rostomyan said. "Next thing you know, they're in jail. If the jails are filled, they put people in stadiums and gymnasiums, and they have no food or water for 10 hours."

The arrests started in 2008, when thousands of Armenians protested that the election that gave Sargsyan the presidency was rigged.

There have been hundreds of arrests in scores of protests since then. Some of the high-profile demonstrations included marches against the fairness of Sargsyan's re-election in 2012; against transit-fare and electric-rate increases and the weakening of pensions; and against the government initially agreeing in 2015 to let a Russian soldier charged with killing an Armenian family be tried in a Russian military court.

The Glendale rally wasn't the first time Armenian Americans have demonstrated against Sargsyan.

In 2009, a crowd gathered outside the Beverly Hilton Hotel in Beverly Hills, California, where he was staying during a state visit, to protest his effort to normalize relations with Turkey.

Sargsyan and Turkish leader Recep Erdogan were seeking a rapprochement that included the reinstatement of diplomatic relations and the reopening of the sealed Turkish-Armenian border.

The protesters objected to a rapprochement unless Turkey acknowledged that the deaths of 1.5 million Armenians at the hands of the Turks during World War I constituted genocide.

The rapprochement effort, which many Armenians in the homeland opposed, foundered and was abandoned in 2010.

Although the 2009 protesters were taking issue with a key Sargsyan policy, they did not call for his resignation.

Since then, the diaspora -- the largest of which is in Southern California -- has seen a lot of other things going on in the homeland that they dislike.

Armenia remains one of the poorest countries in the former Soviet Union, corruption is still rife, Russia forced Armenia to drop its plans to join the European Union in favor of the Moscow-led Eurasian Economic Union, and Russian President Vladimir Putin is trying to broker a Nagorno-Karabakh peace deal that Armenians fear will be unfavorable to the enclave's ethnic Armenians.

Since its independence in 1991, Armenia has always been able to count on the millions in the diaspora to support its policies and prod the countries where they live into offering political and financial support.

There have been exceptions to this pattern of unwavering support -- like the California protest against the Turkey-rapprochement effort.

What made the recent diaspora protest in Glendale different was that it was aimed not at a specific Armenian government policy but at the way the country treats those who feel their voices aren't being heard.

The message the Glendale protest conveyed to Yerevan was far louder than the combined voices of the 1,000 participants: If you want to retain the diaspora's support, you'd better make the political process open to all.