California has had a long and interesting history of technological innovation, motorsports enthusiasts and drag racing hot rods -- remember American Graffiti? -- and now, the next generation of EV's (Electric Vehicles).

I'm interested in sustainable transportation, so I spent an afternoon at Plug-In America's debut fund raiser at Thomas Fogarty Winery, where I was able to sample Pinots, Plug-Ins and Progress. 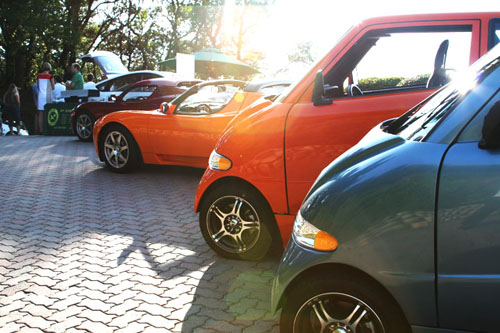 Featured on display were plenty of cool looking plug-in electric vehicles, some historic, some available today and some are coming out soon, including: 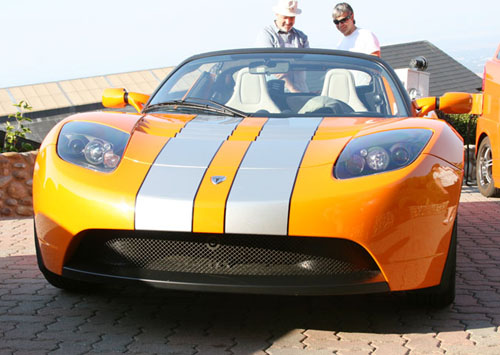 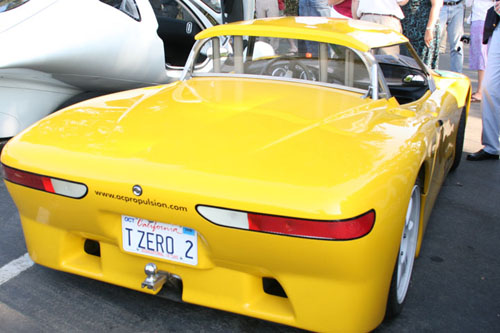 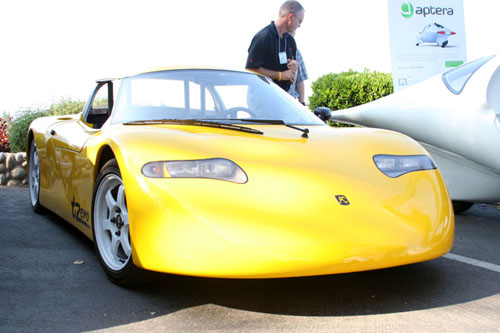 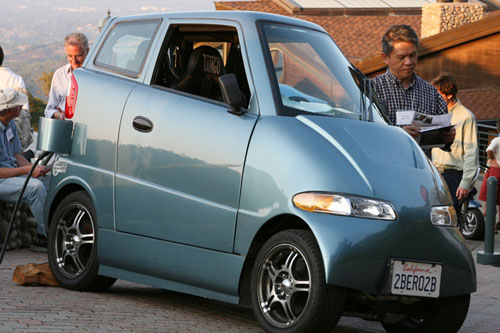 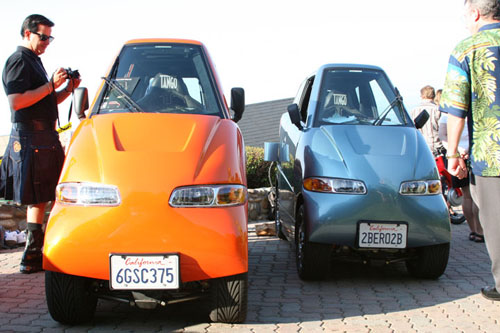 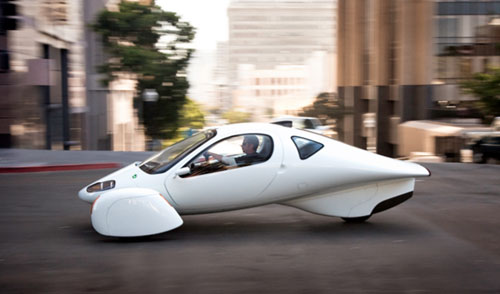 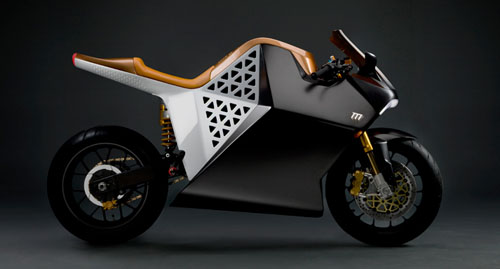 Powerful Mission One designed by Yves Behar of Mission Motors 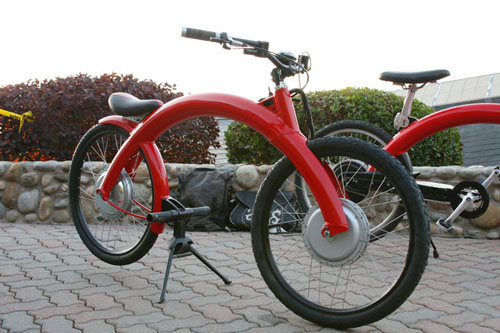 If you want to learn what's out there, check out Plug-In America's web site for the latest vehicles tracker.

Science Fiction or Reality?
Are vehicles powered by sunshine science fiction? Not if you ask Sherry Boscher, Author of Plug-in Hybrids: The Cars That Will Recharge America and co-founder of Plug-in America.

I spoke with Sherry, who believes plug-in vehicles powered by sunshine is more than possible, it's here today and she's doing it -- both driving a plug-in electric vehicle (EV) and powering the EV from solar panels on her roof.

Kevin George: What is the mission of Plug In America?

Sherry Boschert: The mission of Plug In America is to drive change. We advocate for plug-in electric vehicles that drive on cleaner, cheaper, domestic electricity to improve the global environment and our national security. So consumers are excited and ready. Many of them don't know about these vehicles so we do a lot of consumer education. So we have helped consumers plug in by lobbying their own elected officials and letting the car companies know, "We want to plug in."

Kevin George: What do you drive?

Sherry Boschert: I have a Toyota RAV4 EV. My first electric car was a Ford Think City. Lovely little car. Didn't look like any other car. A little two-seater and we initially thought, "Okay, it'll be our second car." Because we had a gas car. We ended up doing more than 90 percent of our driving in that and we realized, "Wow! We could really just live with an electric vehicle and not have a gas vehicle."

Kevin George: And how do you recharge your EV? Your RAV4?

Sherry Boschert: The RAV4 plugs into a charger that's connected to a 220-volt plug like a dryer plug or in hotter climates it's the same plug you use for air-conditioners. It's not high technology. It's really pretty simple.

Kevin George: And you just pull electricity off the grid? Or do you have solar panels?

Sherry Boschert: I have solar panels so I like to say that I'm driving on sunshine. But in reality, the best use of solar power during the day is to feed it back into the grid so they don't have to run those polluting power plants during peak hours. We have timers on the car. We charge at night between midnight and 7:00 a.m. when rates are really cheap and there's excess electricity.

Okay, let's say I take the plunge and purchase an EV, where do I plug in? Is there an electric grid to support EVs? And where does my electricity come from anyways? Am I just adding more CO2 into the atmosphere by using electricity sources from coal burning power plants? To get a glimpse into this world I sat down and talked with Jay Friedland, Legislative Director for Plug-In America who spends his time in Washington, DC sorting all of these issues.

Kevin George: Where do I plug in? Is there an electric grid to support EVs?

Jay Friedland: Plug In America's goal is really to take and move transportation to clean, affordable, domestic electricity and advantages that are everything from greenhouse gas reduction to natural security because we get off of petroleum. And so our goal is to get electric and plug-in vehicles on the road. We can put 4,000,000 cars on the road without having to build a single power plant. So it's a really, really straightforward thing. By just using the off peak electricity and creating incentives. Again, I pay a nickel a kilowatt-hour so it's very, very cost effective for me to take and charge off peak hours.

Kevin George: And where does my electricity come from anyways? Am I just adding more CO2 into the atmosphere by using electricity sources from coal burning power plants?

Jay Friedland: It depends. In California the grid's very, very clean so it's coming from a mix of different things but there's actually very, very little coal in California. This is the big question. Are we just taking and having a longer tail? Well, even in the worst situation, which would be like West Virginia or Kentucky, you're still about twice as good from a greenhouse gas emissions standpoint using an electric car. But, again, each and every year that gets better. And if you start to look at things like, for example, sulfur dioxide from coal plants, it's totally capped so you're not putting any sulfur dioxide into the earth. So you can start looking at reductions at all levels and we're definitely getting rid of... you know, coal plants are going the other way and we're starting to see more and more and more renewables on the grid. So again, the cars get better every year.

Kevin George: What role is the government providing for EVs?

Jay Friedland: So what I do is I work with Congress, with the administration, and with primarily the State of California to try and make sure that from a policy standpoint we lay in the right kind of laws and public policy so that we can get more electric cars and more plug-in hybrids on the road and into consumers' hands. So President Obama, when he was a candidate, basically said, "I want to put a million plug-in vehicles on the road by 2015." And as part of getting to that goal we, along with a number of others -- everyone from the automakers to other non-governmental agencies, other nonprofits -- all worked with Congress and got a very specific set of incentives into the stimulus package. So if you buy a fully electric vehicle, plug-in vehicle, you can get up to a $7,500.00 tax credit. So right now you get 3,000 to 3,500 to 4,500 for Cash for Clunkers but if you buy an electric vehicle you can get $7,500.00. So now this is the big thing: if you buy an electric vehicle you can get $7,500.00. We've put in those consumer incentives and that's gigantic.

So if you want one, there are several EVs available today for consumers including the Tesla, Aptera and BMW Mini EVs. General Motors, Ford, Chrysler, Volkswagen, Hyundai, BMW, Nissan (this is partial list) all have plans to include EVs in the next few years.

Future: Made in America

In the future, Plug-In America hopes to see a whole industry around EVs including batteries, vehicles, clean energy power source and grid and home clean energy installation -- all Made in America.

Kevin George: What about the issue of getting them built?

Jay Friedland: Well, see there's a bunch of things. So last week the department of energy awarded $2.4 billion in grants and basically that program was set up where primarily about $2 billion of it went to building manufacturing facilities for batteries in the US. What that will do is go a long way to getting the batteries to work. Everybody always goes, "Well, do the batteries work?" The batteries work but we're not building them here. And so the goal from a federal policy standpoint is to get 'em built and manufactured here. And then there's a lot of money in there also for demonstration projects and public education and things like that.

Kevin George: And what year might we see batteries built in the US?

Jay Friedland: And cars too.

Overall the event was gorgeous and delicious, produced by sustainably minded organizations, including Vibrant Events and LRE Catering (and many others).

Bottom line, if your enthusiastic about EVs, this may be your time to plug-in and get involved. Find out for yourself why there's electricity in the air around EVs.