You can’t taste it, but a whole lot of water went into producing that hamburger.

As Californians cut residential water use by 25 percent under Gov. Jerry Brown’s unprecedented mandatory restrictions, pressure on the drought-stricken state's water resources continues to come from its robust agriculture industry, which accounts for about 80 percent of the state's total water consumption.

Several outlets this week, including the Los Angeles Times, Quartz and KQED, shared data on how much water is required to produce different agricultural products. Meat is by far the biggest water hog, a 2012 study on water footprints published in the journal Ecosystems found. A pound of beef, for example, requires 1,847 gallons of water to produce.

But would going vegan, vegetarian or "reducetarian" help California as it weathers its worst drought in 1,200 years? 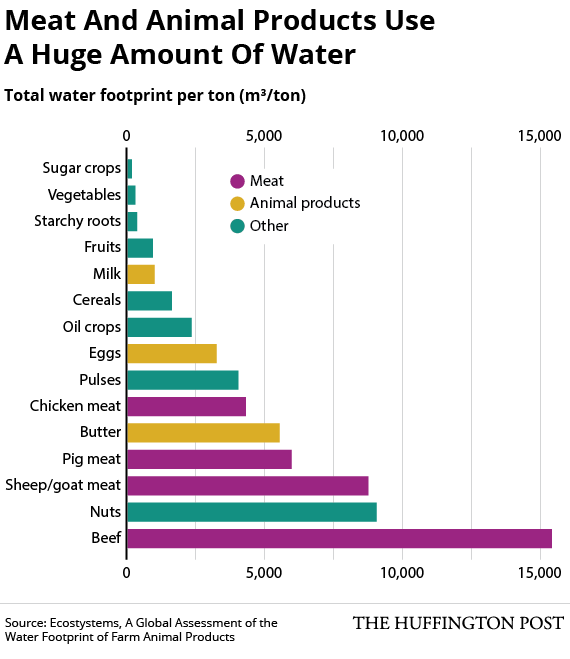 In short, not really, one expert said.

Newsha Ajami, the director of urban water policy with Stanford University's Water in the West initiative, told The Huffington Post that if everyone in California -- the nation's fourth-leading beef producer -- were to go vegetarian, farmers probably wouldn't slow production and would continue selling meat internationally.

"It eventually may impact water use," she said. "It’s not fast. It’s a long-term plan. So if we decided to do that tomorrow, that doesn’t mean it’s going to impact the drought at all ... Don’t forget, because this is a global market, they might have other customers they’re selling their meat to."

However, Ajami said, that doesn't mean people should disregard the water footprint of their meals.

"I think at the end of the day ... eating less water-intense food products certainly is important to lower demand," she said.

U.S. policymakers are starting to encourage that shift.

For the first time, the federal Dietary Guidelines Advisory Committee this year decided to factor environmental sustainability into its recommendations and concluded that a diet lower in animal-based products is both healthy and better for the environment, the Hill reported. The report is currently undergoing a public comment period and has received significant backlash from the meat industry.

The authors of the 2012 study on agricultural water use came to a similar conclusion.

"Managing the demand for animal products by promoting a dietary shift away from a meat-rich diet will be an inevitable component in the environmental policy of governments," they wrote.

That's certainly food for thought in a nation where, according to Scientific American, meat consumption alone accounts for 30 percent of our water footprint.