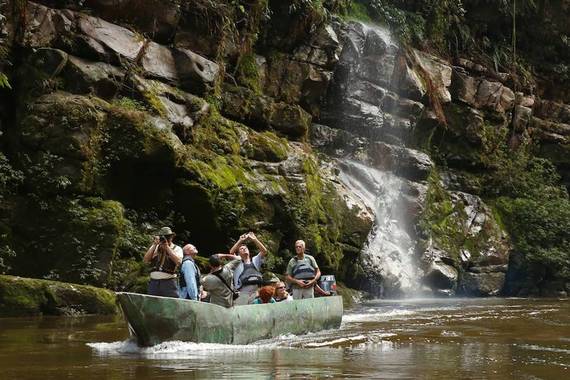 "I think I know an entrepreneurial operation when I see one," says Sheldon Engelhorn, stepping out of the canoe and onto the slippery banks of the rain-swollen Nangaritza River in the Ecuadorean Amazon, believed to be the most biodiverse place on Earth because it joins the Brazilian Amazon to the Pacific through a low point in the Andes called the Paramo.

I am on a rollicking expedition with the San Diego directors of Nature & Culture International, brainy entrepreneurs all, including Charles Smith (the Knowledge Factor), Steve Schutz (co-inventor of the online greeting card and Starfall, which is a kids reading site with 1 million page views a month) and Engelhorn, a biochemist who co-founded Novex, an off-the-shelf tool company that separates proteins and nucleic acids and now is a part of Life Technologies/ThermoFisherScientific. Engelhorn is also the recent alumni regent of the University of California.

And famed Harvard biologist E.O. Wilson (The Meaning of Human Existence) has recently joined NCI'S board.

Nature and Culture's approach to conservation is a California one. Engelhorn calls it entrepreneurial. It's the way he's used to doing business, and it may be changing the way well-intentioned gringos relate to Latin America and the rest of the world.

Certainly, it works. NCI and its partners in Ecuador, Peru, Bolivia, Columbia and Mexico have helped to save millions of acres of rare forest, mountains and jungle, with a goal of turning by 2020 a total of 20 million acres in Ecuador, Peru and Latin America into national parks, wildlife corridors and biosphere reserves, a private-public hybrid that keeps rare plants and animals alive. Where we are right now, along the strangely elevated (for a rain forest) Nangaritza, this means jaguars, spectacled bears, fasciated tiger-herons and the myriad tiny orchids, bromeliads and iridescent hummingbirds and flies that make up an integrated ecosystem.

The approach of NCI and Engelhorn is to go in like any smart startup: Be flexible, work from the ground up, remember that the people you hire are the most important assets you have. Science and sustainability are the watchwords. Though the organization started in Del Mar,Ca, the creation of Ivan Gayler, the biotech real estate pioneer who also co-created the Del Mar Plaza, nine out of 10 employees are from Ecuador and Peru and some 16 offices in six countries.

"Actually," says Engelhorn, "We are more like a venture fund, helping able startups in Latin America. They often come to us with the best ideas, since they have an understanding of the local perspective."

A hundred yards up the bank, NCI staffer Trotsky Riera Vite instructs Engelhorn to choose a "magical" hibiscus walking stick, and we start up the hill trail for the Cascadas de Dios ("Waterfall of the Gods") a place of religious significance to the Shuar, among the last headhunters in the Western Amazon and an NCI partnering group. NCI has helped to secure Shuar land titles with the Ecuadorean government, in the process protecting some 40,000 acres of cloud forest.

Through the rain and the clouds we can see the tops of the Andes, where there is still a lot of copper and gold. Two nearby proposed mines are worth billions of dollars each. Centuries ago, the Shuar took back these mountains from the Spanish in a rare rebellion, even pouring molten gold down the throat of Spain's governor, reputedly asking, "You like gold so much, well?"

Today the gold miners are Chinese and Canadian, and countless little guys with pots of dangerous mercury-extraction agents who the government has trouble controlling. But Engelhorn and NCI/Ecuador talk to everyone. The point is: "best practices."

A good example from the NCI quiver is the cooperative FORAGUA project, which buys out hillside ranches where grazing cattle pollute water sources lower down the mountain. One town started to save $200,000 a year in water treatment costs. You don't have to have a doctorate in theoretical physics from Princeton, like Schutz, to do the math. Ecosystems are saved and clean water ensured.

The Waterfall of the Gods cascades some 200 feet off a shale and limestone cliff. We take turns standing under it.

"I feel invigorated," says Engelhorn, "which is probably what the Shuar intended."

Back at the trailhead, he plants his hibiscus stick. If it grows into a tree, Engelhorn, 65, will be given long life, according to Shuar beliefs.

It starts to rain lightly, then heavily. Coming back along the river trail (the current is so fast, we must walk upriver) Engelhorn slips -- he's wearing only shorts and a La Jolla Cove T-shirt -- and scrapes his elbow from the wrist down. His wife, Susan, the only woman along on the trip, is a bit concerned, the blood and all, and a long way from any doctor.

"You know," says Engelhorn, refusing my offer of Neosporin, "when I cut myself on a reef, like on a surf trip to New Guinea, the thing to do is just scrub it with a brush vigorously along the break, count to 30, and this prevents the initial invasion of bacteria."

Back in San Diego, Engelhorn, who surfs nearly every morning, is known as the "Grand Old Man of Black's Beach."

"I'm hoping to get some arthritis companies to sponsor me," he jokes.

As a biochemist (currently more of a biotech investor, on the board of Opus Pharmaceuticals and IO Informatics), he explains how on the microbial level soap bursts the walls of most bacteria cells.

"Still, Sheldon," says his wife, who seems to be used to this, "you're bleeding."

Further along, the trail is washed out. We hold our cameras and daypacks on top of our heads and swim across a 40-foot pool. Engelhorn, the son of a community college professor who took care of a woodsy church camp in the summer, wades in.

On the muddy road to Vilcabamba (City of the Old People), the bus starts to jackknife in the mud above a fairly precipitous cliff. The driver, a former national soccer player, expertly brings us to a stop.

"Hey!" shouts Charles Smith, interrupting my talk with Engelhorn, "isn't that a fasciated tiger-heron in the rapids down below?"

Smith and Schutz rush to the down slope side of the bus and I can only think of that -- was it a Geico ad? -- where the bus tips into the chasm.

"I'm not a birder," says Engelhorn. "What was your question again?"

"Whether you think the chancellor of UCSD, Pradeep Khosla, will ignore the biological sciences since he comes from the engineering side of Carnegie-Mellon?"

"I doubt that," says Engelhorn, who is a member of the director's cabinet at the Scripps Institution of Oceanography, "but I'll ask."

On a muddy cliff above the Nangaritza Valley, where the Shuar only recently stopped taking heads, we are 4,000 miles from Sunday, which is only two days away.

San Diego-Ecuador, the vast distance is like an office down the hall to Engelhorn. Keep calm, get the job done, integrate all activities, and have fun: Life, work, conservation

Green Postscript: The president of Ecuador, awe-struck by the brilliant yellow flowering trees of Guayacanes, designated the 780,000-acre region a biosphere reserve, partnering with NCI.