California is supposedly the nation's green trailblazer, but it's also the third largest oil-drilling state, with Los Angeles having more urban wells (over a thousand) than of any other U.S. city. 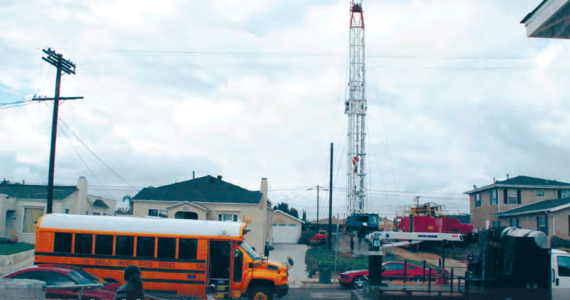 Five-million-plus Californians - the rich and not so rich - live within a mile of a well. It's our dirty little backyard drilling secret. Only it's not so secret anymore.

The easy oil is long gone. What's left gets extracted by highly-toxic and water-intensive well stimulation treatments (WST) - hydraulic fracturing or acidization. An oil derrick in the backyard is one thing, but when hazmat-suited workers use large amounts of hydrofluoric acid to access out-of-reach oil deposits alongside homes, schools and hospitals, it's time to worry.

However, eight days before the CCST published its government-commissioned fourteen-hundred-page report, California state officials jumped the gun by proudly announcing the nation's toughest (and first) fracking regulations (based solely on their own less exhaustive in-house impact assessment).

Americans Against Fracking co-founder, David Braun claims this timing overlap (and the fact the CCST disclosed other facts, such as serious water contamination risks from fracking because of California's shallow aquifers) meant CCST's report was intentionally buried by the special interest of Big Oil.

For Braun and many environmentalists, the oil industry wields way too much political clout in the Golden State, spending an estimated $22 million annually lobbying legislators, including our illustrious green leader - Governor Brown.

As it turns out, while first-time-round 1970's Governor Brown may have been the greenest Governor of them all, millennial Brown walks both sides of the fossil fuel divide.

Yes, though our Governor can claim his "zeal has been intensified to a maximum degree" when it comes to reducing the state's petroleum use, he's extremely friendly to oil extraction and production.

It's as if 77-year-old Brown operates in simultaneous parallel universes. This past December at the UN Paris Climate Change Conference COP21, there was eco-warrior Brown, describing in biblical proportions the catastrophes that will/are accompanying climate change - plagues of beetles, powerful wildfires, mass exoduses of climate refugees. That Governor Brown exhorts other nations to leave fossil fuel reserves in the ground.

While back home the other Brown promotes fracking as the most efficient way to retrieve the states remaining oil. He's also been loathe to regulate WST - even when addressing the vital importance of water conservation in our drought-plagued state.

For Braun, it boils down to the revenue stream big oil generates that helps balance California's unwieldy budget, and pay for Governor Brown's pet projects: The Delta twin-tunnels, and the state's high-speed rail.

But as Braun calls it, "If you're a climate leader you don't enable the worst climate polluters, that's the bottom line."

A sentiment shared by fellow anti-fracking activist and actor, Mark Ruffalo. One of Ruffalo's suggestions to deter oil production is "taxing oil extraction in California and using the money to transition to all-electric vehicles." 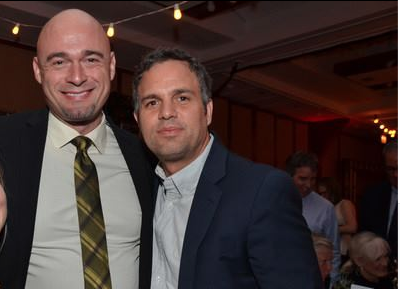 David Braun and Mark Ruffalo, co-founders of Americans Against Fracking

Such a tax would've worked nicely with the part of SB 350 that aimed to halve California's gasoline use by 2030. It was the most ambitious renewable energy increase for the state so far. However heavy resistance from oil companies meant Brown lacked enough support even inside his own party, and the gasoline reduction part of the bill was defeated last October.

Speaking at Pepperdine University in Malibu last month, leading U.S climate change activist, Bill McKibben, says when it comes to getting the world off fossil fuels "the resource that matters most is political will."

It's the lack of a consolidated political movement that allows fracking and acidizing to continue unabated in California, according to Ruffalo. He believes when Californians rise up and declare enough is enough, it will embolden our Governor to say no to the oil industry.

And any day now would not be a moment too soon.

McKibben warns while human beings cope best with the kind of incremental change California is using to adapt to climate change, at the rate our planet is warming there's no time for anything but a rapid and drastic shift from fossil fuels.

Spelling it out, McKibben says it would take 400 Hiroshima bombs dropping daily to melt the Arctic ice-sheet as fast as it's currently melting.

Brown and McKibben talk the same big-apocalyptic-climate-change talk, we just need to push our Governor to start urgently walking the walk.