In 2014, Dr. Elizabeth Rogers and her colleagues at the UCSF Benioff Children’s Hospital in San Francisco noticed a disturbing trend among the tiniest preemies in their neonatal intensive care unit: a high rate of brain bleeds among these babies born before 28 weeks’ gestation.

Rogers wondered if other NICUs had seen an increase as well or if there was something about her patient population that put them at particular risk.

Intracranial hemorrhages, caused by the rupture of immature blood vessels in the brain, are a major cause of death in very preterm babies, as well as a complication linked to developmental delays and cognitive deficits later in life. Driving down the rate of such complications is one way that hospitals can help reduce the number of early infant deaths.

Compared to other rich countries, the U.S. has unacceptably high rates of perinatal deaths, a category that covers stillbirths and deaths within the first week of life. And the most recent data suggest those numbers are not improving ― except in California. That state was the only one to see a decrease in perinatal deaths from 2014 to 2016, according to a report published Wednesday by the Centers for Disease Control and Prevention’s National Center for Health Statistics.

The reason for California’s success may be a statewide data project that has been gathering information from hospitals for the past two decades.

In any other state, Rogers and her colleagues would have struggled to find an answer to her initial question about the prevalence of brain bleeds. But because they were in California, Rogers was able to log into a data dashboard created by the California Perinatal Quality Care Collaborative. The easy-to-use clearinghouse of real-time information from more than 90 percent of California hospitals that treat babies in NICUs let her compare her unit’s outcomes to those at similar units.

What she found shocked her. UCSF was seeing brain bleeds in more than 15 percent of NICU babies, or nearly four times the rate at comparable hospitals of the same size and expertise.

“I was able to go to the dashboard and say, ‘Not only do we think this is a problem, but this really is a problem,’” said Rogers, who is director of the hospital’s intensive-care small-baby program.

Armed with that information, she persuaded hospital administrators to allocate resources to the issue; gathered a group of doctors, nurses, therapists, technicians, janitors and parents to consider what steps to take; and produced a training manual for staffers.

I was able to go to the dashboard and say, ‘Not only do we think this is a problem, but this really is a problem.’ Dr. Elizabeth Rogers

It isn’t clear what causes brain bleeds in premature babies, so Rogers’ group tackled the issue in multiple ways. Starting in 2014, women who went into labor preterm received a shot of steroids to strengthen their babies’ brains. Immediately after birth, the clamping of a preemie’s umbilical cord was delayed 45 seconds, which is known to decrease brain bleeds.

Everyone who interacted with the babies, from X-ray techs to sanitary workers, received training on how to create a calm environment, which included intervening as little as possible and using low voices if they had to speak.

In about three years, UCSF reduced the rate of brain bleeds to 3.8 percent, just a quarter of what it had been and on par with comparable hospitals in the state. This decrease set off a cascade of other positive outcomes. Deaths in the NICU were cut almost in half, dropping from 11.9 percent to 6.8 percent over that time period. Rates of necrotizing enterocolitis ― another common complication among premature babies ― went down as well, which Rogers attributed to the hospital’s increased attention to their littlest patients.

The speed at which Rogers and her team implemented research-based change was remarkable and unusual. It takes an average of 17 years for research data to alter standard medical practice, in part because of entrenched hospital bureaucracies that favor tradition, a systemic reluctance to spend money on monitoring and prevention, and medical staff who may feel competitive and territorial.

Without the initial comparative data, Rogers is convinced she wouldn’t have been able to revamp her NICU’s systems so fast and the rates of hemorrhage would have remained high.

Hospitals in general need to become better at rapidly adjusting and refining their care when it’s lacking or when new research points to a better way of doing things, Rogers argues.

Across the rest of the country, rates of stillbirths and deaths within a week after birth remain at a standstill. In one state, Missouri, the rate has actually gone up since 2014. California has the third-lowest rate, following Washington state and Wyoming.

“To see the results ... is a huge reward,” said Rogers. “It’s a huge validation that all of this effort is worth it.”

They’ll pay thousands to monitor one baby’s heart rate, but there’s no money set aside to monitor the monitors. Dr. Jeffrey Gould, co-founder of the California Perinatal Quality Care Collaborative

While the larger issue of American infant mortality is now more widely recognized, it wasn’t in the public consciousness 21 years ago when Dr. Jeffrey Gould, then a researcher with the University of California, Berkeley, began to compile a single statewide database of numbers on newborn deaths and complications, paid for by the state.

The project grew as Gould convinced neonatologists, hospitals, insurance payers, public health experts and state agencies that it was in everyone’s interest to share NICU data in real time. With its wealth of information, the California Perinatal Quality Care Collaborative also develops best practice standards and toolkits to help hospitals implement those practices. It periodically launches initiatives aimed at improving care in one particular area, such as breastfeeding in the NICU, using antibiotics and reuniting these vulnerable newborns with their families.

The model of the California Perinatal Quality Care Collaborative has spread across the country, albeit only in recent years. Most states now have some kind of perinatal quality collaborative, but they aren’t created or funded equally. Because California was the first, none of the other state collaboratives has as much data or experience. And though some of them provide education on better practices, they don’t seek to help hospitals implement specific changes ― an aspect of California’s collaborative that makes membership so worthwhile. This means the gains California has seen are not guaranteed in other parts of the country.

Gould, now a professor of neonatal and developmental medicine at Stanford, is especially frustrated that hospitals still hesitate to invest real money in trying to improve the quality of care.

“One of the big drawbacks in this country is that quality improvement is not really seen by hospital administrators as a line item kind of thing,” Gould said. “They’ll pay thousands to monitor one baby’s heart rate, but there’s no money set aside to monitor the monitors.”

The annual cost of membership in the California Perinatal Quality Care Collaborative is $13,000 to $15,000, depending on the size of the hospital, and it gives them access to the data dashboard. Participation in each individual initiative is optional and costs an additional fee ― around $8,500 per hospital ― to defray the additional costs for data collection, training and network access.

Meanwhile, the average daily cost of one baby’s care in a NICU is more than $3,000.

More data may ultimately ease this problem too, Rogers said. Besides helping doctors make the case to administrators for more resources for the NICU, as she did, better information leads to more effective and efficient care, which can lead to cost savings.

When a state does decide to invest in improving outcomes for preemies, hospitals may not know where to start. Gould’s suggestion: Use the data to find the low-hanging fruit, and then build on those first successes.

Again, armed with data, Rogers convinced the hospital to free up some funding for her unit to take part in the California Perinatal Quality Care Collaborative’s current effort to improve nutrition in NICUs. For premature babies, this boils down to hospital policies that encourage and assist mothers to pump breast milk soon after the baby’s birth ― a difficult task for women who have just experienced a stressful and unexpected early delivery.

Because formula feeding is one of the only consistent risk factors for necrotizing enterocolitis, breast milk ― especially milk produced by the baby’s mother ― decreases the odds that a premature baby will develop the infection. It’s so good for NICU patients, Rogers said, that doctors look at it more like medicine than food.

“We expect our mortality rate will keep coming down as we improve access to maternal milk, promote early feeding and good growth, and prevent [necrotizing enterocolitis],” she said. “So it’s all linked in the end.”

CORRECTION: A previous version of this story listed outdated membership fees for CPQCC. 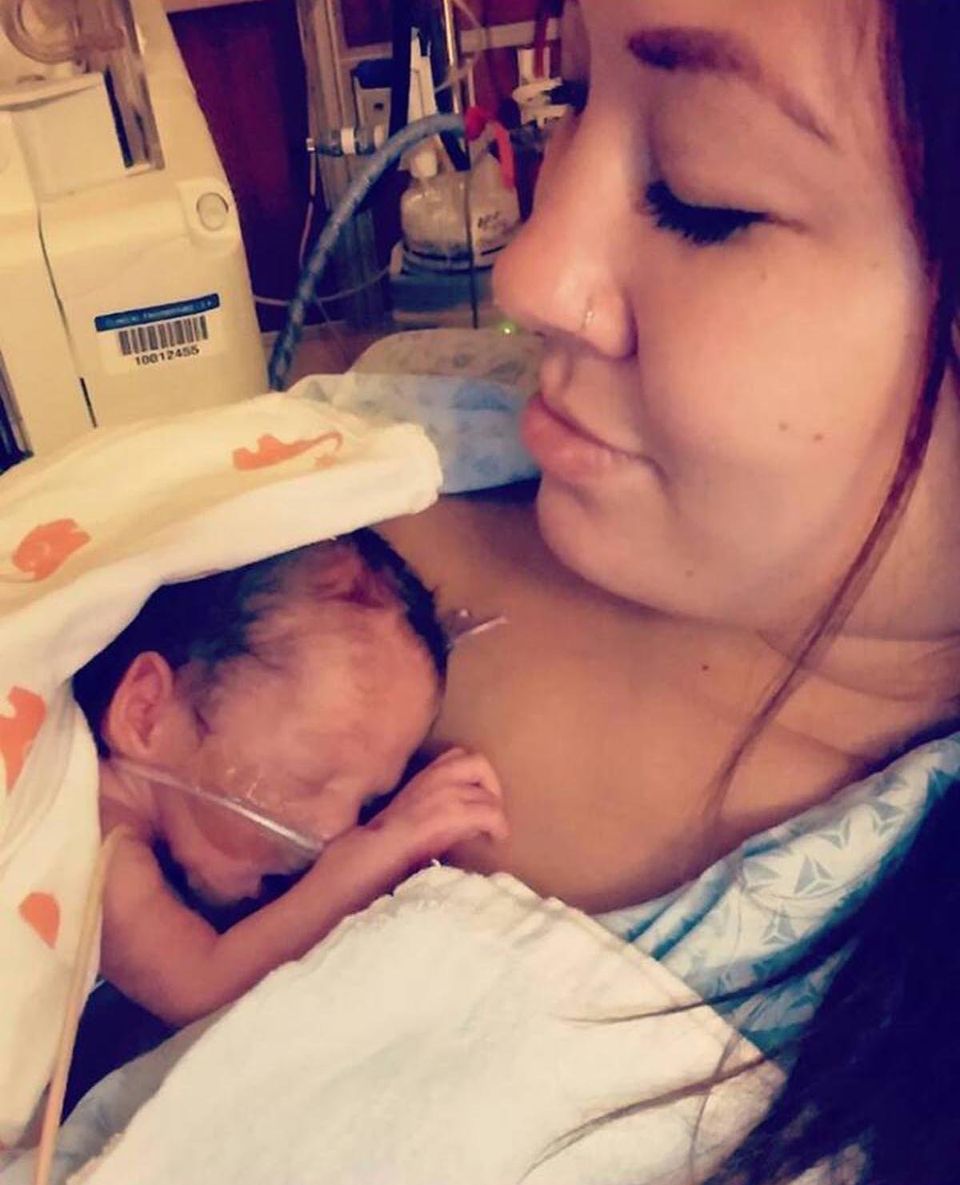 1 / 77
"Cali-Rei was born at 29 weeks weighing 3 pounds,&nbsp;2 ounces. She is 2 months old and currently still in the NICU but due to come home very soon. This picture was taken during our first time skin to skin. One of my favorite moments ever."
Alana J. Martinez