It's beach weather already in Southern California, and when I hit the beach yesterday at Malibu Lagoon, I discovered that I was sharing the sand with some pint-sized visitors who had a VIP section roped off to themselves. Reading the signs posted around the area, I discovered that I was encountering some very rare and distinguished guests indeed: the threatened Coastal Snowy Plover, birds whose habitat of shallow coastal waters near the mouths of streams like Malibu Creek, is disappearing. Once I saw my first plover in the Malibu sand, a small, sparrow-sized, pudgy, round, white bird with wonderful black and brown markings on its head and wings, I was smitten. When I read that the new chicks look like balls of white fluff standing on toothpicks, I really wanted to see a newborn... but it may be many years before I see a plover chick in Los Angeles County. 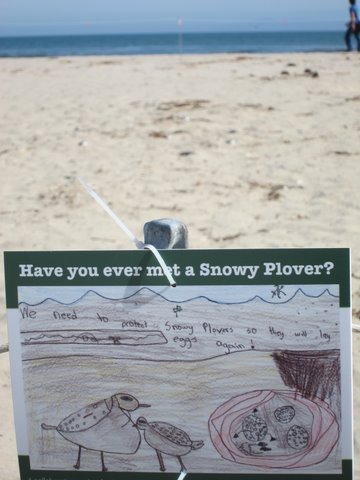 The hope in roping off sections of plover habitat in people populated areas like Malibu Lagoon is that we will be able to share the beach with our feathered friends and that the plovers will nest and reproduce. Plover experts have seen some nesting behavior: for example, males hollowing out the sand with their bodies to build "scrapes" or hollows in the sand that they will decorate with beach debris to make nests. But according to Garry George of the Audubon Society, no eggs have been recorded since 1949 in Los Angeles County, where many beachgoers, including dogs, can frighten the skittish birds or kill them. For thousands of years, the entire California coast was home to nesting plovers. Today, the closest population of nesting plovers to Los Angeles County is in Orange County at the Bolsa Chica Conservancy by Huntington Beach. Military bases at Vandenberg and Camp Pendleton also offer prime nesting opportunities for plovers because the beaches are closed off to the civilian population. Disturbances from human activity can cause birds to use their energy reserves defending territory instead of breeding.

Plovers eat small invertebrates like flies and larvae from the seaweed that washed to shore. Much plover habitat is disturbed by beach cleaning machines that rake up the natural beach organic material like seaweed along with the tons of mostly plastic trash that litters our beaches. The roped off section at Malibu Lagoon is an attempt to prevent human interference. I noted the lush quantities of kelp on the sand at the lagoon, teaming with potential food for the plovers. But I noticed something else that saddened me. The natural food was enmeshed with something quite unnatural: copious quantities of plastic, mostly polystyrene, in various stages of breaking apart. This polystyrene isn't just from careless beach goers. This super light plastic blows long distances and washes down the Malibu Creek and storm drains from inland. Polystyrene is also carried up onto the beach from the ocean, our largest waste dump. 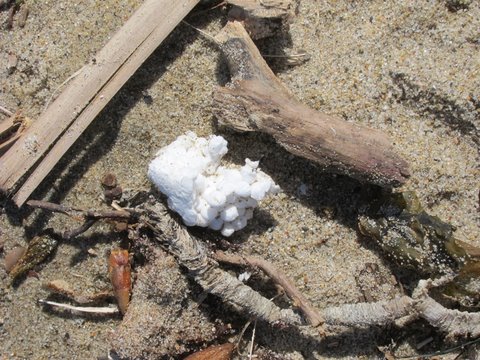 Polystyrene, a type of plastic known most commonly by its Dow Chemical brand name of Styrofoam, is one of the most common forms of trash at California beaches, right up there with plastic bags and plastic resin pellets, the raw material from which plastic items are formed. Polystyrene is particularly dangerous to birds and sea creatures because it breaks into round bits that resemble larvae and fish eggs that mimic food. Styrene a chemical found in polystyrene is a known animal carcinogen. It is not good for birds, fish, turtles or cetaceans, and it's terrible for people too. Styrene is a known human neurotoxin, possible human carcinogen, and it migrates easily into food or drink when foam containers are heated or come into contact with hot food, acids (like lemon or tomato juice) and fats or oils. A study by the United States Environmental Protection Agency conducted in 1982 found that 100% of Americans tested had Styrene in their fat tissue.

How can we help the plovers? Besides leaving some coastal areas undisturbed by human traffic so plovers can nest, the key for increasing their numbers, we can stop making the plastic waste that invades their habitat. California Senate Bill 568, as introduced by Senator Alan Lowenthal, would prohibit food vendors in California, on and after January 1, 2013, from dispensing prepared food to a customer in polystyrene foam. 47 local California jurisdictions already ban Styrofoam.

Can California's beach lovers and Plovers exist in harmony? It's worth our best efforts to make room for this wonderful creature at the beach. And there are multiple benefits to giving up our nasty habit of packaging fast food in polystyrene that is poisoning us and fouling our beaches and Plover habitat.

Maybe we will be lucky and get some plover chicks at Malibu Lagoon this year, but come late April or May, the Plovers will leave and probably fly back to wherever they hatched says Kimball Garrett, California bird expert and ornithologist at The Natural History Museum in Los Angeles. When the plovers return to Malibu Lagoon in 2013, should the California ban on polystyrene food containers pass, maybe the birds will feel more at home with a nesting area of seaweed and driftwood, not polystyrene.