Racial minorities and students with disabilities are suspended at substantially higher rates than their white and non-disabled peers, according to an analysis of discipline data from nearly 500 California school districts. Researchers said the disparities are a civil rights issue and cause for alarm.

Released yesterday by the Center for Civil Rights Remedies at UCLA's Civil Rights Project, the analysis is based on data school districts reported to the U.S. Department of Education's Office for Civil Rights. The reporting districts serve about 90 percent of all students in California.

Disparities in suspension by race, gender and disability status "suggest a crisis in many of these districts," said Daniel Losen, co-author of the report and director of the center.

"In too many districts, we're no longer saving out-of-school suspension to be a measure of last resort," Losen said yesterday on a conference call with reporters. "This policy hurts kids of color most of all."

The center's analysis included only out-of-school suspensions of one day or more. In-school suspensions, expulsions, arrests or referrals to law enforcement, and districts with suspected inaccuracies in their data, were not included.

Although the report's data does not show the reason for or duration of suspensions, state data indicate that many suspensions are for minor offenses. For example, more than 40 percent of suspensions in California are for "willful defiance," or any behavior that disrupts class.

Seventeen districts or county offices of education suspended 20 percent or more of their students in 2009-10. The Manteca Unified School District suspended 1 in 3 students – the highest rate in the state.Black and American Indian students faced even greater risk of suspension at Manteca: 59.6 percent and 42.4 percent, respectively. The district, which enrolled about 24,000 students at the time, also reported the state's highest rate of suspensions for Hispanic students: 29.7 percent. By comparison, 33 percent of white students were suspended.

Although Manteca reported those figures, they may be erroneous, said Rupinder Bhatti, the district's director of child welfare and attendance. After seeing the center's report yesterday, Bhatti believes suspension records were duplicated and misidentified when the district converted to a new database system in 2009-10. She said she is reviewing the data and will be seeing how it can be amended in the federal database and the center's analysis.

Manteca's true overall suspension rate is closer to the 10 to 15 percent range, Bhatti estimated. The rate among African Americans is closer to 20 percent.

"We don't resort to suspensions instantly for the first incident," Bhatti said. "We try other interventions to correct the behavior – such as parent conference, student conference – before resorting to a suspension."

Minorities at many of the state's largest school districts experienced greater risk of suspension as well.

The Los Angeles Unified School District suspended 5.9 percent of all students. But the suspension rate among black males, 23 percent, was more than four times the rate among white males, 5 percent. While rates were lower among females, those who were black, American Indian or Hispanic still faced greater risk for suspension than their white counterparts.

Black males with disabilities experienced the highest suspension rates of any demographic group. Among the state's largest school districts, the rate was as high as 59 percent at the San Bernardino City Unified School District. The rate among the district's non-disabled black males was 29 percent.

"One would think kids with disabilities would not be suspended at these much higher rates, but in fact, they are," Losen said, noting that federal law calls for behavioral support and services for special education students in need. "It suggests that school districts across the state … are really falling down in their responsibility to meet the needs of kids with disabilities – especially if those are kids of color." 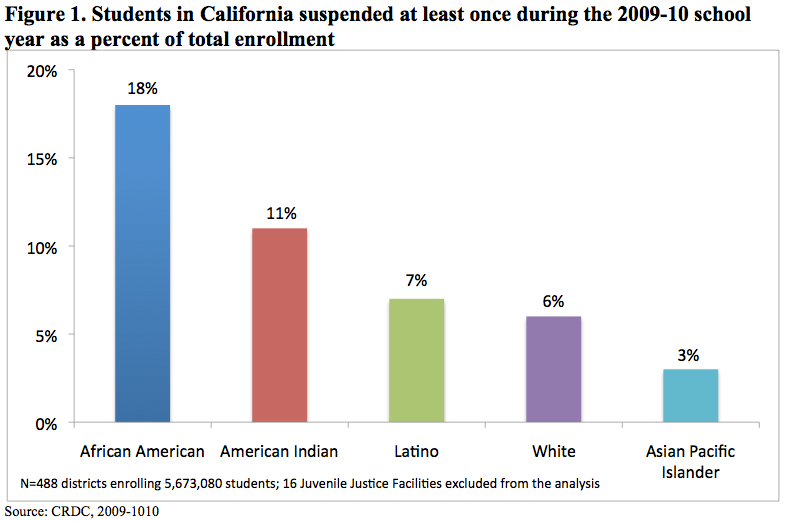 The center's findings are consistent with a long history of research on school suspensions, Russ Skiba, a professor and director of the Equity Project at Indiana University, said in the call with reporters.

"Our poor, urban schools see higher (suspension) rates of students of color than white students, but so do our more well resourced, richer, suburban schools," he said. "The results are not simply due to poor kids behaving badly."

Skiba called on schools and districts "to really take a reflective look at their practices to see where they might be in engaging in practices that might be contributing" to high rates of suspension among certain groups.

Research shows that the frequent use of suspension is not effective in helping schools provide safe and productive educational environments for either suspended students or their classmates. Schools with higher suspension rates also tend to have lower ratings in academic quality and school climate.

A number of bills currently in the state Legislature seek to change suspension policies and require districts to address high suspension rates – efforts that a recent poll found many California voters would support.

Four in five voters believe that the state's school discipline policies need changes, according to the survey, which was commissioned by The California Endowment, a statewide health foundation that also provides funding to California Watch, and conducted by the public opinion research firm Fairbank, Maslin, Maullin, Metz & Associates. Nearly 3 out of 4 voters said suspensions should be used as a last resort after other approaches to correct misbehavior have been tried, except in very serious cases.

"Nobody's arguing that we should not ever use out-of-school suspension. It should be a tool that educators have in their kit to respond to behavior," Losen said. "It just defies common sense, the frequency at which some kids are being kicked out of school – especially in light of these better alternatives."