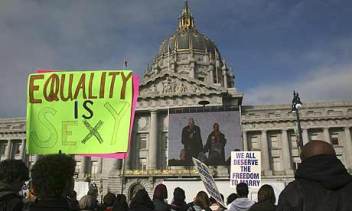 The overarching conclusion of the California Supreme Court today is that Proposition 8 was no big deal.

After all, same-sex couples still have all the rights included in the "marriage bag" and so the actual effect of reserving the term marriage to heterosexual couples is not significant enough to warrant a more extensive constitutional approval process.

Amendments are small changes requiring only a majority vote and revisions are larger changes, changes to the basic governmental plan or framework, that require a debate and approval process in the California State House as well as amongst the electorate.

As the Court writes: "Proposition 8 does not by any means "repeal" or "strip" gay individuals or same-sex couples of the very significant substantive protections afforded by the state equal protection clause either with regard to the fundamental rights of privacy and due process or in any other area, again with the sole exception of access to the designation of "marriage" to describe their relationship."

Because the effect of Proposition 8 is so "minor" we don't need to classify it as a revision and it can stand, as is, after a simple majority vote.

But the California Court offers no real analysis for its conclusion that simple nomenclature is really a minor matter. This, despite the fact that the offhanded treatment of the term marriage forms the basis of their decision to uphold Proposition 8.

Justice Moreno, in his dissent, comes to the opposite conclusion. Enforcing equal protection requires protection for all aspects of the law, including nomenclature. He even quotes the Court's previous conclusions in Re Marriage Cases:

"Denying the designation of marriage to same-sex couples cannot fairly be described as a "narrow" or "limited" exception to the requirement of equal protection; the passionate public debate over whether same-sex couples should be allowed to marry, even in a state that offers largely equivalent substantive rights through the alternative of domestic partnership, belies such a description. "[T]he constitutional right to marry . . . has been recognized as one of the basic, inalienable civil rights guaranteed to an individual by the California Constitution . . . ." (Marriage Cases, 43 Cal.4th at p. 781.)

Justice Moreno concludes that upholding Proposition 8 - a ballot measure that concretely denies equal protection and creates a legal distinction between two groups for no other reason than a fear and hatred of a minority by the majority - will "emasculat[e] the equal protection clause of the California Constitution as a provision of independent force and effect. "

If one agrees that a legal distinction between two similarly situated groups is nothing to scoff at, it is quite possible that Proposition 8 was a revision.

Justice Moreno explains that revisions to the Constitution may be structural, but are not limited to structural changes and may also include amendments that, "substantially alter the substance and integrity of the state Constitution as a document of independent force and effect."

Justice Moreno's point - and it is an important one is that if you refuse to dismiss the pain and suffering caused by Proposition 8 and address the legal discrimination it enshrines in the Constitution as being important and dangerous, you cannot consider Proposition 8 a simple amendment.

The majority never addresses this point. It calls the ballot measure a minor change that carves out a discreet exception to the equal protection clause and moves on to a detailed description of case law that ceases to be relevant when the court using that case law refuses to engage with the human outrage and controversy surrounding the subject of their decision.

Failing to uphold equal protection rights for same-sex couples is one thing, but doing so without engaging in the real debate over the importance of marriage, rather than civil unions, is a disservice to California's people and to the body of jurisprudence that forms the basis of many legal rights and responsibilities enforced in the State.