I recently discovered Carrie Swidecki on Twitter, second grade teacher, multi world record holder, dance record holder, and former US Just Dance Champion who has been dancing her way to fight childhood obesity, and helping to raise 85K for charity along the way.

In 2000, Swidecki got laid off from her job and ready to eat her troubles away, walked past a donut shop with every intention of picking up a donut but instead went into the local arcade and played Dance Dance Revolution. Within playing 10 steps of the game, Swidecki's game died.

"I remember a gentleman telling me I sucked. As a childhood athlete who had become obese, his comment did not sit well with me," she said. "I saved all my change and went back day after day, finally taking third place along with losing 75 pounds and 10 pant sizes."

Pictured below are Swidecki's before and after photos. 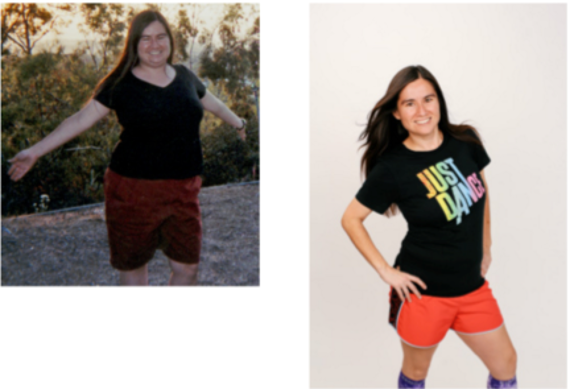 Around the same time she started playing Dance Dance Revolution, Swidecki went back to school to become an educator.

"Budgets were being cut and so were programs. I applied for four grants in order to bring Dance Dance Revolution into the classroom," Swidecki told me.

Seeing how great it made her feel and how much it helped her through her weight loss journey, she knew it could help her students too. As a result, the response she got was overwhelming - in a good way.

"The students loved it and parents were calling me saying how much they loved it," she said. "Some started playing at home as a family and were losing weight together and it gave them more energy."

According to Centers for Disease Control and Prevention, childhood obesity has more than doubled in children in the past 30 years.

In an effort to get more staff involved, not just locally, but nationally, California based Swidecki set a world record.

"When I saw how much attention and awareness childhood obesity was getting from my world record, I started to set more and now I do it every summer increasing the time." 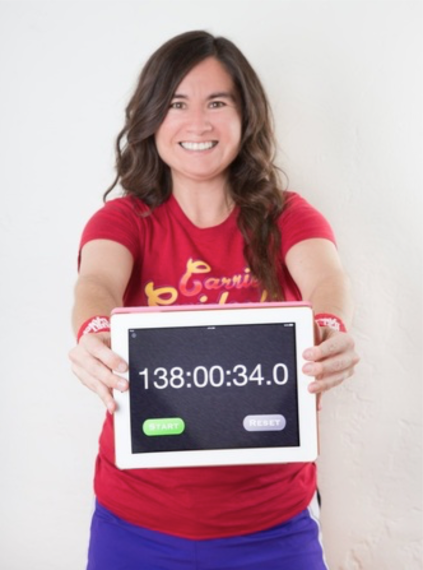 On July 23 she broke her latest record, scoring 276 high scores in 24 hours, in what she calls "uncharted territory for exergaming (exercise gaming)."

Through raising awareness with her world records, Swidecki has solely raised over 7K for Extra Life, a sub group Children's Miracle Network. In addition, she had been invited to a lot of charity events, which in combined efforts have raised 85K also for Extra Life.

Swidecki credits Twitch, a social platform for gamers, in helping her achieve her fundraising goals.

"They streamed my last world record breaking event on twitch.tv/RizeUpGaming and users donated money to Extra Life on my behalf."

Swidecki encourages others to chase their dreams and follow their passions. As a kid, she loved video games and now she's able to get fit, get healthy, and give back because of them.

All photos provided by Carrie Swidecki.