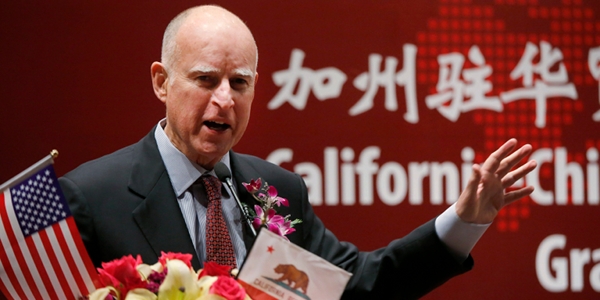 At the heart of California Governor Jerry Brown's China-California energy initiative is the possibility of a major turn away from climate devastation.

California, under Governor Jerry Brown's leadership, is playing a pivotal role in the struggle to transform the global economy toward energy conservation and renewables. Some recent developments:

With the closure of San Onofre's two nuclear reactors, California is just one plant away -- Diablo Canyon -- from being a nuclear-free state with an advanced economy.

In the first Brown Era, the utilities and industry insisted that California needed 65 nuclear plants sited on its coastline. Thanks to the environmental movement and then-Gov. Brown, that malign vision was scrapped long ago -- and California powered ahead economically.

Southern California Edison shut down San Onofre because it could not meet the demands of consumers, safety advocates, environmental experts at Friends of the Earth, and the oversight requirements of Sen. Barbara Boxer, chair of the Senate's natural resources committee.

The closure creates added pressure on California to step up its energy efficiency and renewables investments, already responsible for raising the national standards.

The irresponsibility of the nuclear industry -- deluded by the expectations of endless bailouts -- is revealed by the tasks left for future generations at San Onofre. The idled plant will remain on the coast another half-century, until three million tons of radioactive fuel cool off and pipes a mile offshore are pulled. The cost will be $3 billion at a minimum.

According to the Los Angeles Times, four other nuclear plants shut down for economic reasons this year, eight are currently in "safe storage," and 16 are in various stages of decommissioning.

A Green Car Revolution
Unlike the "other America" where free market fundamentalism seems to be the state religion, Brown's administration still believes in state mandates for achieving air quality and transportation goals. The latest development in a decades-long process is the California air board's decree that zero-emission vehicles be 15 percent of all car sales by 2025, up from a pathetic one percent at present.

For perspective, it is important to reject the right-wing demonizing of "command and control" strategies so often accepted by liberal and centrist commentators. Brown is not Stalin, but is actually attempting to make modern capitalism more competitive through efficiencies. The ARB has held endless hearings for decades attempting to make a transition that is effective, affordable and profitable. Compromises have been common. Brown's energy commission has consistently proven that energy reductions are feasible, cost-effective and beneficial to human lungs.

California is responding to federal air quality standards which themselves are modeled after the historic fuel-efficiency standards pushed by California three decades ago, which saved the gas-guzzling U.S. auto industry from collapsing from its own stubbornness.

Now Honda, Nissan and Fiat are in a price war to deliver zero-emission cars to Californians.

And Brown is considering proposals from advocates for a major new drive to put electric cars on the roads.

Brown handled his key relationship with the Chinese with great success during Xi Jingping's two-day visit to southern California last week. Brown's energy collaboration with China may have contributed to the significant breakthrough in the US-China agreement to phase out potent greenhouse gases announced during the summit. In his private meeting, Brown briefed the Chinese leader on a petition signed by hundreds of scientists on the likelihood of a sudden and irreversible tipping point in the planet's biological and ecological systems.

Secretary of State John Kerry and Democrats Henry Waxman, Ed Markey, Richard Durbin, Sheldon Whitehouse, among others, also pushed for the deal in a letter to Obama, but Brown was the only American official meeting months ahead with the Chinese leader on energy agreements. Brown also was the only American official to meet with the Chinese president extensively during the period of the California summit, following up on previous meetings in China in April and one year earlier in California.

In the wake of Brown's efforts, China is expected to adopt key energy efficiency standards modeled on California's historic laws, as well as invest in California's economy. Obama can provide leadership by deciding to ratchet up federal energy standards, which will prompt greater investments in conservation and renewables.

China and the United States account for forty percent of global carbon pollution. Jerry Brown has declared his goal is to "decarbonize the economy."

Some of California's previous trend-setting initiatives include:

Environmentalists are legitimately concerned - to say the least - over fracking and Brown's announced plans to modify CEQA, Prop 65, and other key environmental laws, and plow massive tunnels to ship Delta water to southern California developers. Serious questions remain also around the viability of the cap-and-trade system launched by AB 32. While there will be immense battles over these questions this year, they do not diminish the strategic significance of Brow's efforts to "decarbonize the economy."

On fracking, the key problem is the political divide in the Democratic Party between mainly coastal representatives and the corporate wing of the party and its allies in the job-hungry Central Valley. Senate Democrats seeking a fracking moratorium were recently blocked by their own members, mainly Latino, from the Valley. The governor himself has been ambiguous on the issue, for whatever reason. A deeper problem is the long-term inability of environmentalists to fully immerse themselves in the priorities of environmental justice. At this point, some fracking will go on, and the state's regulatory system seriously tested. When a catastrophe occurs, as one surely will involving water quality or public health, environmentalists will be vindicated and empowered to push for a moratorium.

On CEQA, Prop 65, and the Delta tunnels, those battles will be fought fiercely with the same underlying problems facing the environmental community and affecting the outcomes.

Former State Senator and leader of sixties peace, justice and environmental movement. Director of the Peace and Justice Resource Center.