Burger King has jumped on the same health-conscious bandwagon as Wendy's, with a new ad campaign that attempts to put the burger chain in a fresher and healthier light amidst the current trend of vilifying fast food. Gone are its commercials with the creepy, yet amusingly kitschy "King" mascot; BK's new ad agency now puts the brand in a cleaner direction, with fresh vegetables prepared in slow motion against a dark background in its latest TV spot. Leading the new brand direction on the menu is the California Whopper, which doesn't use the old stand-by adjective " "flame-broiled" on its box; it's "grilled and guac'd." Here's how it rates: 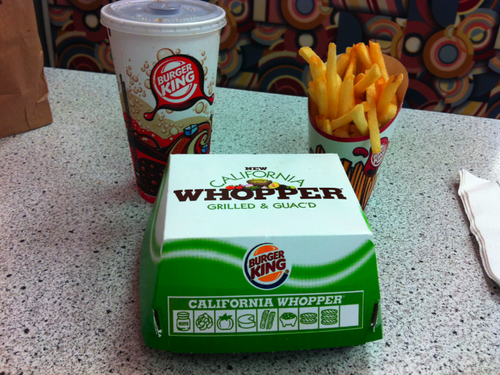 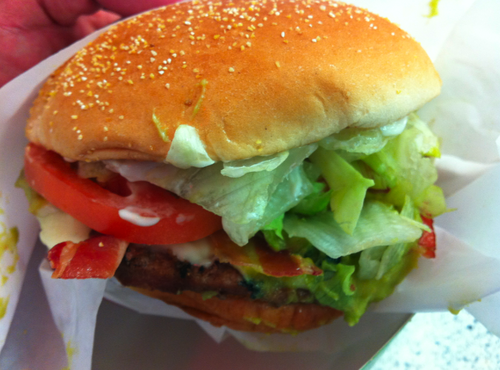 The Verdict: C-. Burger King doesn't exactly say that its goal is to provide healthier meals -- that's what McDonald's PR people are working on -- but better food is sort of implied in its new campaign's direction. However, the truth is that this new California Whopper, with all its fresh-looking ingredients from the Golden State, packs in more calories than the regular Whopper (670 calories), or the bigger Steakhouse XT Burger (770 calories). This would be fine if there was added taste to the burger, but there isn't. The guacamole is really mild and bland, and only does well with adding a creamy texture to the burger. Its mild taste overpowers the flavors in the cheese and the bacon -- and even minimizes that signature "flame-broiled" BK taste -- with a smear of mediocrity. Perhaps if the guacamole had a bit more spices, it would be a better offering.

If you're not into spicy foods, that's fine too; just know that if you're opting for this burger for something lighter, its mild taste does the trick -- but its calorie count doesn't. If only the King were still around to see this...