SANTA ROSA, Calif., Oct 10 (Reuters) - Firefighters battled 15 wildfires on Tuesday that have killed at least 13 people and destroyed hundreds of homes and businesses in Northern Californiawhile raging through the state’s world-famous wine country.

Efforts to control the fires were helped by the wind dying down on Monday, Brad Alexander, a spokesman for the governor’s Office of Emergency Services, said.

However, the death toll could still rise, he said.

Schools and colleges near the wildfires canceled Tuesday’s classes and two hospitals in Sonoma County were forced to evacuate, state officials said.

About 1,500 homes and commercial buildings had been destroyed, Ken Pimlott, director of theCalifornia Department of Forestry and Fire Protection, said on Monday.

Much of the damage was in California’s wine country north of San Francisco. Sonoma County bore the brunt of the fatalities, with seven fire-related deaths confirmed there, according to the sheriff’s department. Two people died in Napa County and one in Mendocino County, officials said. An 11th death was reported in Yuba County, NBC News reported.

Some 20,000 people had been evacuated from their homes since Sunday, officials said, while CNN said more than 100 had been treated for fire-related injuries, including burns and smoke inhalation.

The 15 fires broke out during the weekend and were fanned by high temperatures and dry conditions. They spread across some 73,000 acres (29,542 hectares), fire officials said.

In addition to potential damage to vineyards from fire itself, experts say sustained exposure to heavy smoke can taint unpicked grapes.

“You can’t see anything,” he said in a telephone interview. “The smoke is very dense.” Oliai had not been able to get close enough to his vineyards to see if flames reached his 90-acre property. “We got our grapes in last week but others still have grapes hanging,” he said.

That included Orange County in Southern California, where a wildfire on Monday destroyed at least a half dozen homes in the affluent Anaheim Hills neighborhood, forcing the evacuation of hundreds of residents, authorities said. 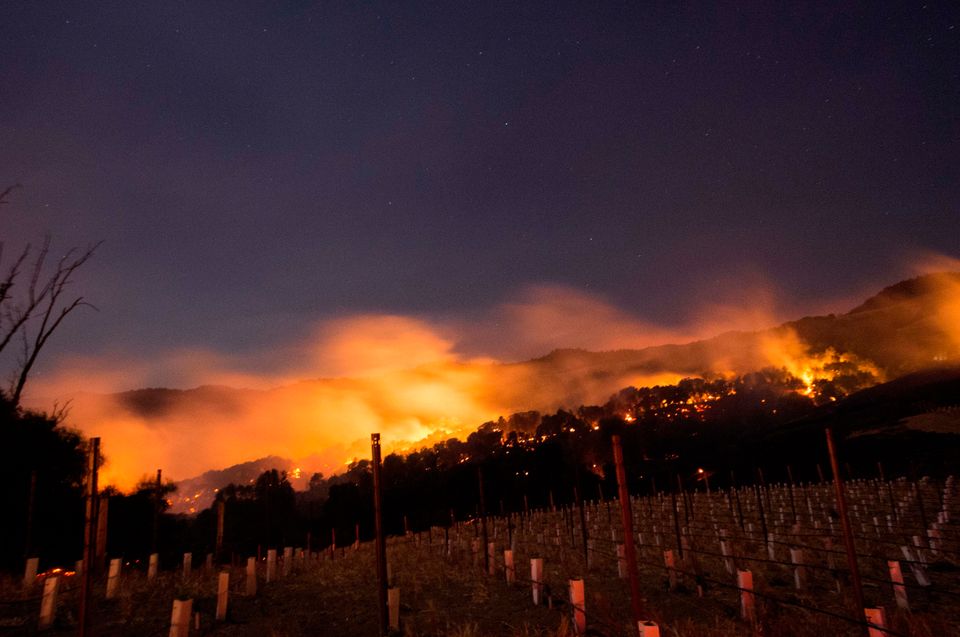 1 / 11
Fire glows on a hillside in Napa County, California, on Oct. 9, 2017, as multiple wind-driven blazes continue to whip through the region.
JOSH EDELSON via Getty Images