As citizens from around the nation jam the congressional phone lines for 72 hours, calling for comprehensive clean energy and climate legislation, US Sen. Jim Webb (D-VA) has emerged as one of the most critical votes for a clean energy future.

Webb's state of Virginia stands on the frontlines of the clean energy and climate debate--and Webb, born fighting for progressive causes in Appalachia and America, now must decide whether he will come to the forefront of the battle for clean energy and an end to deadly coal mining and burning, or quietly watch the fate of his state decided by outside interests.

Every Virginian--and American--needs to call Sen. Webb today to not only support desperately needed clean energy and climate legislation, but to sign on as a co-sponsor with Republican Sen. Lamar Alexander of the Appalachian Restoration Act to end mountaintop removal at Virginia's climate ground zero.

And then, everyone needs to make an instant vote for clean energy now in the Virginia coalfields by voting for the Wise Energy and Sustainable Economic Diversification and Development Project (WE SEDD), a citizen led effort to diversify the coal dependent mono-economy of Wise County, Va by promoting economic and environmental sustainability, local and worker ownership, community-owned renewable energy systems and local economic skills.

The state of Virginia loves to pimp its gorgeous Blue Ridge for tourism--here's a recent google ad that appeared on Huffington Post lately: 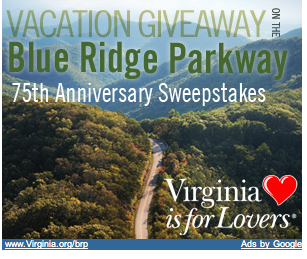 And yet, more than 67 mountains in the Blue Ridge have been blown up and stripmined through reckless mountaintop removal operations in Virginia--over 150 miles of pristine waterways and streams have been jammed and sullied with toxic mining waste.

Sen. Webb understands this. In his bestselling book, Born Fighting: How the Scots-Irish Shaped America, he wrote:

The ever hungry industrialists had discovered that West Virginia, eastern Kentucky and southwest Virginia sat atop one huge vein of coal. And so the rape began. The people from the outside showed up with complicated contracts that the small-scale cattle raisers and tobacco farmers could not fully understand, asking for "rights" to mineral deposits they could not see, and soon they were treated to a sundering of their own earth as the mining companies ripped apart their way of life, so that after a time the only option was to go down into the hole and bring the Man his coal, or starve. The Man got his coal, and the profits it brought when he shipped it out. They got their wages, black lung, and the desecration of their land.

That rape of the land, and the communities, continues today. Over 25% of Wise County, in Webb's beloved southwest Virginia, has been stripmined. And it has left the region in an economic stranglehold, keeping out any sustainable development. As Justin Maxson of the Mountain Association for Community Economic Development wrote in a letter to the Washington Post recently:

In fact, coal mining jobs amount to only about 2 percent of employment in the central Appalachian region; the percentage is only slightly higher if you consider related employment. It does not account for anything approaching most of the employment. In Wise County, where The Post's story was set, there were 2,537 coal miners, or about 11 percent of total county employment, in 2004. That's fewer workers than hold jobs in retail trade (3,118).

Instead of inflating the importance of the Appalachian coal industry, coal counties need to face reality. It's time to diversify their economies, look at the facts and stop believing in a comfortable yet nonetheless fictional story of coal's overwhelming contribution to the region's well-being.

Last month, Virginians converged on the state capitol in Richmond in an historic hearing to introduce the first "stream saver" bill in the state legislature, in order to halt the illegal practice of burying Virginia headwater streams with mining waste. The bill never got out of committee.

"Our whole way of life here in southwest Virginia is being destroyed by strip mining and has been for a generation. I don't understand why it's been allowed to go on for so long. Our waterways are our most precious resource and we made the trip to Richmond to make sure our legislators know that," former coal miner and retired federal mine inspector Larry Bush Bush testified.

Cabell West of Richmond, president of the 3,000-plus member Garden Club of Virginia, which unanimously passed a resolution last month in support of SB564, also addressed the committee. "I remind you that you have pledged to uphold the Virginia State Constitution. Article XI of our constitution reads: it shall be the Commonwealth's policy to protect its atmosphere, lands and waters from pollution, impairment or destruction for the benefit, enjoyment and general welfare of the people of the Commonwealth'. For the sake of the people, please protect our headwater streams in southwest Virginia by passing Senate Bill 564 to correct this wrong."

For more information on how to bring a clean energy future to Virginia, check out the amazing work of Wise Energy for Virginia, and the Southern Appalachian Mountain Stewards.