Last weekend my boyfriend came down with a wicked case of Ebola. Wait, that doesn't seem right -- I feel like I would've heard about a Jersey outbreak or I'd remember being forced into quarantine. But if it wasn't Ebola, then what was it that made him too weak to move as he neared his end and repeatedly reminded me how very gravely ill he was?

Oh that's right -- I remember now. A cold. That's what my boyfriend had. Case of the sniffles.

And it got me thinking, mainly about how men are usually such wimps when they're sick, while women seem to able to power through. Maybe it's because women spend almost a quarter of their adult lives in a crampy, hormonal hell in which our bodies are hijacked. Maybe evolutionarily women have had to be the stronger sex in order to give birth. Maybe it's because throughout the centuries of male privilege, women have had no choice but to suck it up when they're sick and make him his turkey pot pie anyway.

Whatever the reason, my boyfriend spent the entire weekend in a sad grey sweat get-up, complete with hoodie pulled over his head and thick, wool socks. It was 50 degrees outside.

And on the rare occasion that he was actually upright, he'd close his eyes and bow his head, summoning the energy required to sit up and -- I can only assume -- contemplating the guest list of his imminent funeral. And no matter what I asked him, his response was always the same: I'M SICK.

Stay at my place tonight?

Can you move over a bit?

Do you need help finding your balls?

I just don't quite get it. He's a pretty tough guy and not usually a complainer, but when it comes to physical ailments, he becomes this mushy, drippy puddle of his real self. Which might be easier to accept if I didn't know for a fact that he's capable of so much more. A few years ago we went to
El Salvador to learn how to surf (read: repeatedly get my ass kicked by the water as I watched him get up on his first try), and while we were there, he got sick. I don't know exactly how sick but he definitely looked like shit, and it seemed like more than just a case of the sniffles. We'd already booked a tour guide to take us up to the top of a volcano, and when climbing a volcano is on a day's agenda, you don't skip it. So we climbed that sucker for the better part of a day, through different climates and varying angles of ascension, and without the sandwiches that the tour guide forgot in his car. When we got to the top, the wind was so strong that eventually I had to sit down and just wait until the tour guide could help tether me to the ground and move me to a safer spot.

The whole thing was breathtaking and a little frightening and completely physically draining. And he never complained once. 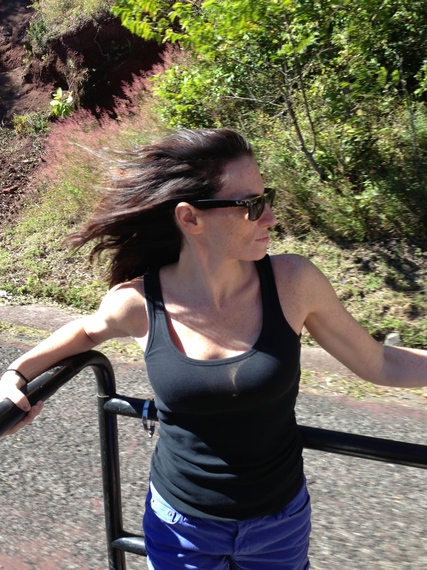 On our way to the base of the volcano.

Of course, as soon as we got back to the hotel he commenced being a whiny little bitch, and was fast asleep by 8:00 that evening. I spent the rest of the night fuming -- not only did I get screwed out of my last night of vacation, but the pool-side wedding reception had a techno-music-strobe-light theme happening, so sleep was improbable at best.

The next morning, he interrupted my sulking to ask me what was wrong, and I began with, "Look, I think I've been really understanding about you being sick..." He stopped me there, unable to keep a grin from spreading across his face.

"Yeah, that doesn't make you a 'supportive girlfriend.' That just makes you... not an asshole." Huh. Did not see that coming.

Occasionally you're given the gift of getting out of your own way. For whatever reason, when my boyfriend told me that all I was, was NOT an asshole (and even that was no longer true), something clicked. I didn't have to battle through all of the ego and pride that usually blinds me to the truth of something and forces me to get dragged -- kicking and screaming and flailing wildly -- toward a lesson. I just heard him.

He didn't want to be sick any more than I did, but instead of considering any of his feelings, I was intent upon sitting in my own sludgy shit. I often have trouble with perspective -- trouble remembering that just because I'm the center of my own universe and throw mental parades for myself all the time, it doesn't mean that I'm actually that important. It just means that life will continue to have to right-size me with humbling lessons like that day in San Salvador.

So I guess the point is, that while I'm clearly the superior physical specimen, capable of withstanding illness courageously while he whimpers in a corner, it's possible that things like "intimacy" and "not being an asshole" don't come quite as naturally.

What can I say? I'm a work in progress.

Writer. Seeker. Smart-ass. Blogger at Sum of My Pieces.