A colleague just received a mass email action from California Democratic Party Chairman John Burton reiterating my call days ago on the Huffington Post to change the number needed to bust a filibuster.

Burton, the former California Senate President and Congressman, is a bastion of Democratic politics and probably more influential than national party chair Howard Dean given his close relationship to Nancy Pelosi and the San Francisco Democratic donor establishment. 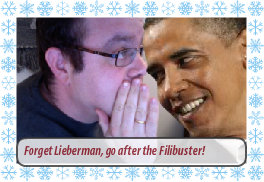 My earlier post pointed out that climate change and real health care reform should not depend upon the likes of Joe Lieberman or Kent Conrad or Ben Nelson. Senate Majority Whip Robert Byrd changed the math needed to overcome the filibuster in 1975, when the number needed to invoke cloture and overcome the filibuster changed to three fifths of the Senators sworn (60 votes) from the previous two thirds of those voting (66) . Historically the filibuster has been used to stall progressive change, including the Civil Rights Act of 1957, when Strom Thurmond set a record of 24 hours and 18 minutes of talking a bill to death.

Rule 22 of the Senate, governing filibusters, can be changed or eliminated by a simple majority according to the US Supreme Court in U.S. v. Ballin (1892) Senate rules call for 67 to change the cloture rule, but Democrats should be able to rewrite the rules since they control the Rules Committee. Rule 22 can go out the door all together or be modified. Republicans under Senate Majority Leader Bill Frist threatened to blow up the filibuster in 2005 with far fewer numbers. What are Democrats waiting for?

Burton's voice will help the chorus grow but progressives need to make this is their new cause if they hope to move the ball forward not only on health care but climate change, financial regulation and other key priorities too. Progressives need to heed the warning of Joe Hill: Don't mourn, organize.