Last week, I called myself a bitch. It was shorthand, really. I had an unpleasant exchange with a male banker and left feeling that the only way to be taken seriously was to act like a bitch.

In writing about the experience, what I found most interesting in people's responses (aside from the majority of online commentators basically telling me to shut up and stop complaining) was how many female friends bumped up against my use of the word bitch.

In part, I wrote: "It's second nature for women to switch into bitchy, bossy, don't-fuck-with-me-mode, because how often are we spoken to differently than the man standing next to us? How often do I have to raise my voice to be taken seriously?"

A coworker emailed me: "Unless you were flipping desks or threatening to get these dudes fired, you weren't acting bitchy -- you were acting professional."

For millenials, the word has become a replacement for the exclamation mark.

But it also has roots deeply established in feminism and every woman I've talked to has a different relationship with the word -- depending on the situation. Like the often-wrongly cited example of how many different words Eskimos have for "snow," bitch seems to have just as many meanings.

I took out a pen and paper and tried to breakdown the word.

BITCH:
a. Bossy; to bitch someone around.

b. Complaining; bitching and moaning.

c. Inferior; to be someone's bitch, acting like a little bitch.

d. Overly emotional or moody; she has her period and is acting like a total bitch.

e. Aggressive; that bitch just pushed to the front of the line.

f. Rude; what a bitch...she didn't even say hello.

As one friend put it, sometimes people are mean and we need a word to describe them -- like "asshole" or "jerk." Sometimes bitch is just a synonym. 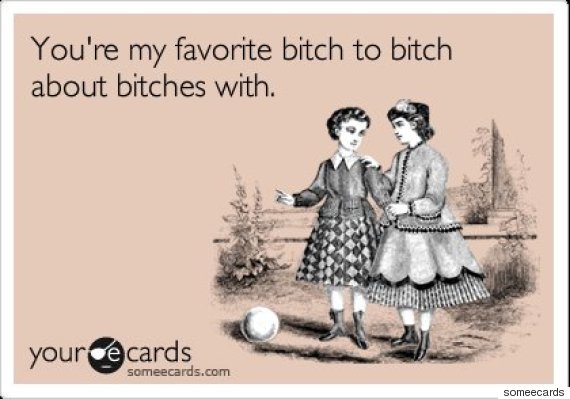 But where bitch gets interesting is when it's used to illustrate power and control within genders. Easy example: a man doesn't act manly enough, or fails to exert power, and he is called a bitch. A woman has too much power or control and she is called a bitch.

I think we assume that if a woman is any of the things listed above (bossy, aggressive, rude), then people will think she's a bitch. This may be the case.

But I called myself a bitch. Why? As a reminder, I didn't flip one desk.

I was assertive. I was confident. I was logical. I explained that their repeated mistakes were unacceptable. I was clear.

Yet somehow, leaving the bank, I had taken this social perception of expressing displeasure and replaced it with the word bitch. Was this conditioning so engrained within me? Had it been so keenly absorbed that I couldn't even feel its presence?

Is it the same reason women chronically ask for less raises than men do? The same reason we're still paid 77 cents when a man makes a dollar? Are we so viscerally uncomfortable with asking for what we want that we cloak our discomfort in words like bossy, bitchy and cunt?

Gloria Steinem said, "A woman who aspires to be something is called a bitch."

I was born right smack in the middle of the 1980s. I was raised to believe that I could be anything I wanted if I worked hard. I still believe that.

Believing that it's okay to ask for what I want -- and expecting to be treated equally -- are things that sound so antiquated. But they're not.

I bet the banker from last week and the bankers from the weeks before do not even remember our exchanges.

But what I learned, while they fumbled through their antique word processors, is that it's not unpretty or unfeminine to be assertive. In the words of my mother, it's actually pretty bitchin'.