In Western art calligraphy is a minor art form, mostly confined to books and the occasional decorative function. But in Islamic art, the practice of beautiful writing is much more.

Because it grew up alongside the Quran, Islam's sacred book, calligraphy developed from a central root and flourished broadly, spreading to every branch of artistic expression. (The full breadth of these arts are the subject of "Islamic Art: Mirror of the Invisible World," a film I co-produced that airs Friday as part of the PBS Arts Summer Festival.)

Take the way Arabic writing literally jumped off the page into architecture: Any tourist visiting the Alhambra Palace in Spain, the Topkapi Palace in Istanbul, the Dome of the Rock in Jerusalem or the Taj Mahal in Agra, India, can't help being struck by the central role calligraphy plays in traditional Islamic buildings.

Written Arabic emerged from humble beginnings. Among the earliest examples, in Mecca, are crude letterings chipped into standing boulders that date from the late seventh century. They were a people's way of memorializing significant parts of the Quran and the sayings of the Prophet Muhammad, who lived and had recently died there. The very earliest verse in the Quran is a command for people to read. In English it might run like this:

Read! Read in the name of your Creator,

Who made you from a wet drop

And generously taught you with the pen

What you didn't know.

No wonder the word gained such primacy.

As the Quran began to be written down on parchment, early calligraphers took to heart one of Muhammad's most famous statements: "God is beautiful and loves beauty." They started early, developing writing styles that enhanced and formalized the 6346 verses and 114 sections of the Quran. The very tools of these early copyists show their careful attention to aesthetics: the angle at which the tip of the writing reed was cut, the care taken in blending inks and curing paper, the use of precious gold to enhance portions of verses, and above all the meditative, near-mystical approach to penmanship that calligraphers adopted in their work -- all combined to create an art of tremendous subtlety and sophistication.

You don't need to read Arabic to see the beauty of this writing, or to see why it would quickly be incorporated into so many other artistic forms. The simple elegance of plain black script circling the rim of a white ceramic plate or bowl speaks for itself and is universal.

In a general museum show of Islamic art, words appear on almost every precious object, from a 12th century Palestinian water pitcher to an inlaid Persian pen case to a small ivory jewelry box carved in medieval Muslim Spain. Calligraphy is the form of forms in Islamic art. But perhaps the most unexpected and universal appearance it makes in Islamic art is in the architecture.

It's a mesmerizing experience when we come to the Alhambra Palace, in Grenada, Spain and stroll through its interconnected courts and courtyards, to be lead through the entire palace by beautifully crafted, flowing script that runs along the halls, across the ceilings, up and down the columns and around the fountains too, leading us in a swirl of language cut into stone with a serenely dizzying beauty that pulls the whole palace together into one whole.

More than 2 million people pass through the Alhambra every year, yet the impression is nearly universal: you experience a building from the perspective of a person surrounded by and strolling through an enormous, shapely book. We seem to be entering a long flowing narrative full of elegant conversation, enfolded in thousands of yards of scrolling language rolling through the buildings it unites. The same is true in Jerusalem, at the Dome of the Rock and at the Taj Mahal in India.

Never mind that we may not understand one word -- we are mesmerized by this transformation of language into flowing stone scrolls of shapely meaning. This is a visual, rhythmic Wonder of the World that obeys internal geometric rules, an elegant flow ordered by a mathematical preciseness -- which in a way is the essence of all Islamic art.

PHOTO GALLERY
Calligraphy Is the Islamic Art of Arts

Michael Wolfe is the Co-Executive Producer of "Islamic Art: Mirror of the Invisible World," a 90-minute documentary to be broadcast nationally on PBS July 6th at 9pm (check local listings) as part of the PBS Arts Summer Festival. The Festival is a seven-part series that featuring artists and performances from nine different communities around the country, and underscores PBS's ongoing commitment to provide viewers a front-row seat and a back-stage pass to the art-making process. See below for a clip about calligraphy, from the film. 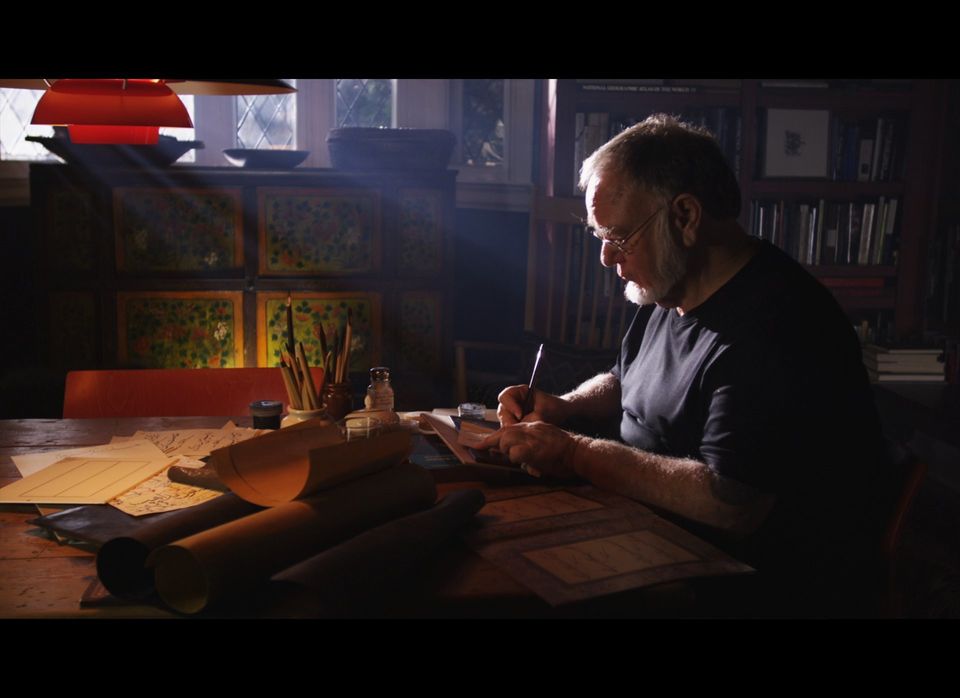