In our previous article we outlined how Verizon New Jersey (VNJ) and the State have cut a deal to erase Verizon's obligations to rewire New Jersey's Public Switched Telephone Networks with a fiber optic wire capable of 45 Mbps in both directions. This article supplies evidence that Verizon New Jersey may have committed fraud by submitting annual reports for the last 20 years that were based on a total fabrication of the truth. 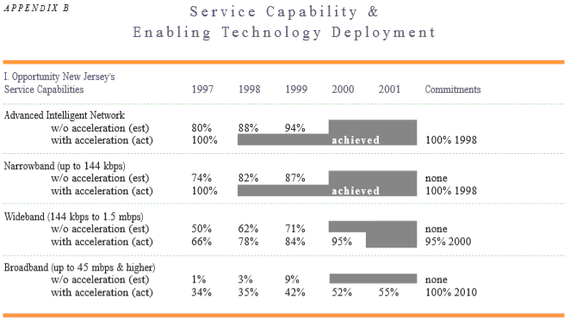 This is an excerpt from Verizon New Jersey's Annual Infrastructure report for the year 2001. It was filed with the New Jersey Board of Public Utilities (NJBPU) and sent by mail to interested parties. And it claimed that in the year 2001, Verizon New Jersey had completed 55% of their entire territory and could offer customers a residential service that could deliver 45 Mbps in both directions.

Problem is -- Verizon didn't start any deployment of residential or small business fiber optic services until at least 2006-2007 in New Jersey. We ask the reader and any lawyers reading this -- Is the fraud?

Reading the bottom row, it says:

Click here to see the original timeline from the law.

Every year Verizon New Jersey submitted annual infrastructure reports and every year they claimed that they had fulfilled their obligations -- in writing and sent in the mail.

And let me be clear; the law, known as Opportunity New Jersey, which was implemented in 1993, outlined a fiber optic future, replacing the aging copper, and offering residential services, not business-class services (like ATM, etc.).

Of course a lawyer might say that the 'statute of limitations' for fraud is probably only six years in New Jersey.

In 2012, the State woke up and claimed that the law was never changed and was still effect and that two towns, Stow Creek and Greenwich, had not been upgraded. And the State commission issued an 'order to show cause' asking Verizon what happened.

In 2012, Verizon replied and submitted two documents that claimed that they had completed their obligations, year by year, and their filings showed that in 2005, 83% had "broadband capability" and the final report for 2010 showed that 99% had broadband capability. And they included lots of other data points. 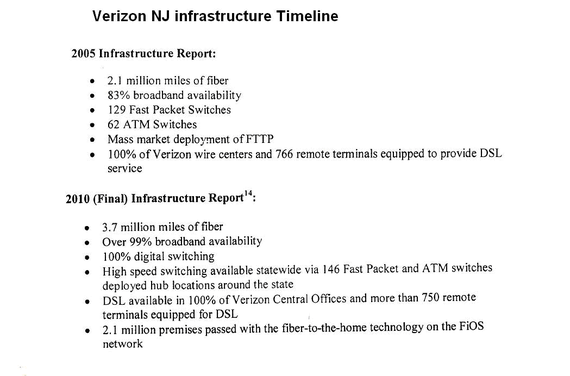 This is pure rubbish. While Verizon throws around numbers like a drunk throwing around beads at Marti Gras, this is window dressing. The company decided to change the requirement to DSL (which travels over the old copper wiring) at speeds that were considered inferior in 1992.

The State had not changed the laws. Where are the words "45 Mbps in both directions" as stated in the original law? They removed them, thinking that the State would not notice.

Yet, the original law was very clear. This was 45 Mbps in both directions.

But most importantly, isn't this fraud? Verizon has been submitting annual reports every year claiming that they were on target and fulfilled their obligations -- and they didn't complete their obligations. They lied. In writing. Every year.

This Plan Was to Replace the Old Wire with a New Wire.

The original law was for an upgrade of the original Public Switched Telephone Networks, the state-based utility. And what was supposed to be accomplished is simple -- everyone who had a wire in their home or office was getting it replaced -- swapped out for a new wire. That's it. The aging copper wires (some of which has been in for over 50 years) was now going to be a new fiber optic landline. And all of this was part of the state-based utility.

And let us remember: Verizon was and is getting paid to do this; it wasn't a favor.

Verizon's Cable Renewal Shows that at Least One-Third of the State Isn't Getting Upgraded, One-Half of the Population.

Verizon's cable franchise for FiOS TV was up for renewal in 2013 and it travels over these fiber optic wires. Under the franchise:

Please notice that 'premises' is NOT a household, but a combination of households and businesses, and is used to goose the numbers to make it look like more areas were upgraded.

We've gotten multiple emails from New Jersey union members who outlined that many of the towns listed as upgraded have only a small percentage of the town actually wired -- i.e., after the 70 municipalities that the company is required to do, the rest are hit and miss.

This chart shows the Opportunity New Jersey timeline that was laid out in the original law in 1993 as compared to the Verizon FIOS TV deployment, which started around 2006-2007.

Even though Verizon claimed to have 55% completed in 2001, there was no fiber deployment in the state of New Jersey from 1993-2006. This meant no cable competition, no school upgraded to 45 Mbps, no economic growth based on high speed services to business customers, among other harms.

Then We have the Bait And Switch:

Verizon claims it fulfilled the obligations by adding any broadband service in the state, which includes DSL, wireless, and two cans and string.

This is Verizon's new definition of "Broadband Digital Service" in their 2012 response to the show cause order. They include DSL, which travels over the old copper wire.

And in order to show that they had completed 100% of the state, Verizon added wireless to prove that they had 99% broadband capability.

"Verizon Wireless has deployed its 30 network to almost all of New Jersey, and is in the process of deploying 4G in the same areas; the Verizon Wireless 4G LTE network provides broadband at average data rates of 5 to 12 megabits per second on the downlink and 2 to 5 megabits on the uplink, speeds up to 10 times faster than the company's 3G network."

Let's count some of the disconnects.

Verizon Wireless is not upgrading the State Public Switched Telephone Networks. Verizon Wireless is a separate company and prior to 2014 was a joint venture with the UK firm Vodaphone. Wireless is supposed to be competing with the wireline networks. Wireless can't offer any cable competition. And who's kidding who, these speeds are pathetic as compared to a fiber optic service delivering 45 Mbps in both directions. Worse, by 2014, we now know that fiber optics can handle 300 Mbps to 1 Gbps (1000 Mbps) speeds. And finally, there is price. Verizon's Wireless service has bandwidth caps and charges per gigabit after the customer's allowance runs out.

And the kicker -- the stipulation agreement's standard will be DSL speeds, which means that the state goes backward and the new 'goal' is to return to a standard that was considered inferior in 1992.

I asked a friend in law school what he thought and he responded with this paragraph of what's needed to take a fraud case.

"Liability for fraud exists when six elements are proven: (1) knowingly, recklessly, or without reasonable grounds, (2) making a material misrepresentation (3) to deceive another (4) who reasonably relies on the misrepresentation (5) causing that person (6) actual damages."

And why would Verizon lie? Well, if they told the truth they would have had to give back the $15 billion dollars they collected and counting for the upgrades that did not happen or some percentage depending on when they got caught. (And that's not counting damages.) And, of course, some of the Verizon senior management might have ended up doing a perp-walk in handcuffs for signing fraudulent documents.

Punchline: Verizon knew all along that they had not fulfilled their obligations.

This from a press release by Verizon in May 2004.

"Verizon has begun installing in Keller, Texas a new technology known as fiber to the premises (FTTP), which uses fiber optic cable and optical electronics to directly link homes and businesses to Verizon's network. The fiber-optic connections will replace traditional copper-wire links ... Although the use of fiber optic technology is common throughout the telecom industry, Verizon is the first company to begin using it to directly connect homes and businesses to the network on a widespread scale."

?This all brings up and ugly question: Why did the State commission accept these obviously deceptive annual reports? -- Or why is the State sweeping all this under the dirty rug?

And if you're not in New Jersey -- the same thing probably happened in your state as Verizon, AT&T and Centurylink all made commitments to upgrade almost every state in America -- and collected billions per state to do it.

Calling all lawyers. Feel free to contact me directly.