As the editor of Astronomy magazine, I am calling for an open and public debate over the planetary status of Pluto, which was notoriously changed in 2006 by the International Astronomical Union (IAU). Editors of the magazine are volunteering to host such a public debate, and to involve readers of the magazine in the process and the outcome. 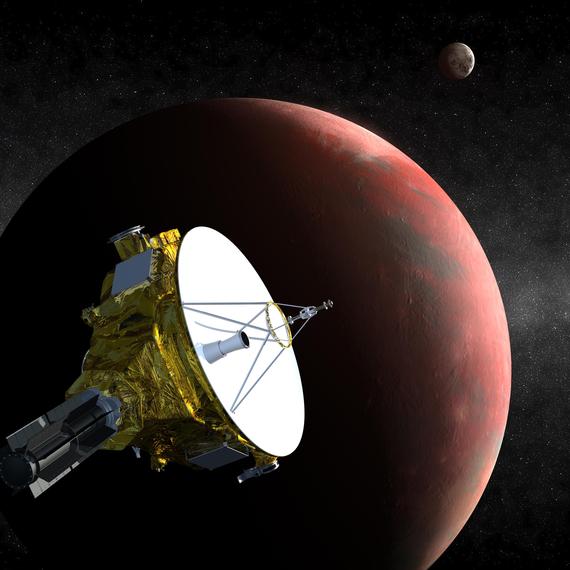 Alan Stern and Neil deGrasse Tyson should hold a public debate on this issue to settle the logic behind what constitutes a planet once and for all.

In 2006 the IAU "demoted" Pluto to dwarf-planet status, setting off an outcry of public disappointment, first among schoolchildren but later among all classes of astronomy enthusiasts, and even planetary scientists, who disagree with the IAU's logic.

At a meeting in Prague, members of the IAU voted on redefining just what constitutes a planet. The IAU produced three major criteria: (1) A planet orbits the Sun; (2) it is massive enough to exist in hydrostatic equilibrium (that is, it's spherical); and (3) it has "cleared the neighborhood" of smaller bodies within its orbit.

Schoolchildren seemed miffed at the demotion and wouldn't let the issue go. Amateur astronomers generally were upset, thinking the "demotion" of Pluto ridiculous, as it had been considered a planet for more than three-quarters of a century and was held in high regard in the hearts of astronomy enthusiasts everywhere as the most distant planet -- even if it could only be seen as a faint "star" in backyard telescopes. The world press had a field day with the issue, and it seemingly wouldn't die. To exacerbate the hard feelings of the pro-Pluto set, Neil deGrasse Tyson, director of the Hayden Planetarium in New York City, stirred controversy by placing Pluto with other small Solar System bodies and away from the planets in the newly remodeled exhibit at the planetarium.

What makes the whole Pluto issue still controversial is the nature of the IAU's definition, which was poorly thought through. The problem and the controversy come from the last criterion -- that a planet must "clear its orbit " of smaller bodies, which is ambiguous at best, if not outright flawed. I have actually heard planetary scientists say, "What does this really mean, even?" According to the IAU, Pluto has not cleared its orbital neighborhood of smaller bodies, and therefore it is a dwarf planet, not a planet. Clearly, the Pluto argument hinges on this technicality, because Pluto does orbit the Sun and is large enough to be spherical. But many planetary scientists remain skeptical of the IAU ruling because they believe it biases against objects of smaller size with increasing distance from the Sun and is squarely at odds with other IAU classification schemes that rely on an object's intrinsic properties, not its location.

A house is a house whether it stands in a city or in the countryside. Shouldn't a planet be a planet regardless of where it exists? At the Pluto-like distance of 40 astronomical units -- 40 times farther away from the Sun than we are now -- Earth would not clear its orbit of asteroids, and so would Earth then not be classified as a planet? Planetary scientists have scratched their heads about this, remarking that stars are stars wherever they exist -- and stars can orbit stars, in fact. Some astronomers even openly consider very large moons like Ganymede and the Moon planets as well and have posed the question, "If stars can orbit stars, why can't planets orbit planets?"

To make matters worse, in 2010 astronomers discovered the first Earth Trojan asteroid (confirmed in 2011), 2010 TK7, which orbits at the fourth Lagrangian point in our planet's orbit, leading Earth by 60 degrees. It is a tiny asteroid, spanning some 300 meters. Further, Earth has a second associated asteroid, 3753 Cruithne, a 5-kilometer rock in a so-called overlapping horseshoe orbit in resonance with Earth. Moreover, astronomers know of five Trojan asteroids of Mars and nine asteroids associated with Neptune, and similar objects are associated with Uranus. Jupiter has a substantial population of Trojan asteroids on both "sides" of the planet in its orbit, as well as the Hilda group of asteroids in orbital resonance.

Planetary scientist S. Alan Stern, principal investigator of the New Horizons mission, has publicly criticized the redefinition of Pluto. In fact, he suggests that Pluto is indeed a dwarf planet, but that dwarf planets are planets in every measure as well. He suggests that the New Horizons mission -- the 2015 flyby encounter and the lengthy, months-long return of substantial amounts of data from the spacecraft -- which will last well into 2016, is likely to clarify the issue among scientists and the public at large. Marc W. Buie of Lowell Observatory also has been openly critical of the classification, and other influential planetary scientists have too. The issue seemingly won't go away and is very much in flux -- made worse in clarity by further discoveries each year.

This issue needs to be settled logically, and with a careful face-to-face debate over the meaning of what the IAU has done. There would not be any better way to do so than to have Stern and Tyson face each other to talk through the issue of Pluto and what it really is -- its context and meaning in the Solar System.