On August 18th, Chicago Theological Seminary posted "If you don't think racism exists, you're white" on social media. After two weeks of wide engagement, the statistics were amazing. Over 200,000 people were reached. Over 16,000 people engaged with this internet post (meme) with either likes, comments, or sharing. 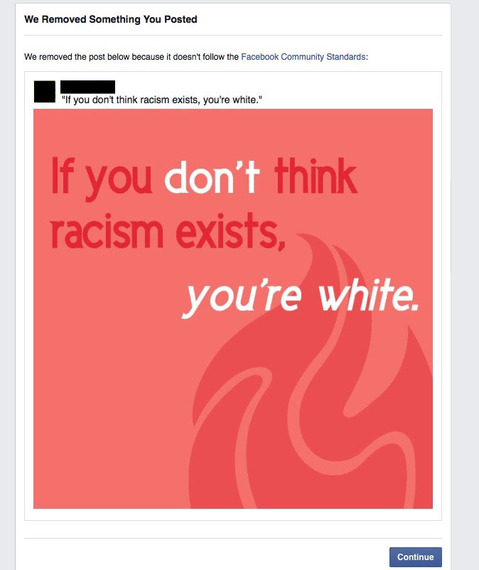 The post did what we wanted it to do. We wanted to make people think; we wanted to get people talking about difficult and important matters facing our society; and we wanted to take a stand on a crucial justice issue. And yet the post was removed. While we cannot know exactly why the meme was removed, we can only guess, after a review of the Facebook Community Standards, that Facebook considered the meme to fall under their "Hate Speech" standard where they say, "Facebook removes hate speech, which includes content that directly attacks people based on their race, ethnicity..."

Should we then assume that some people complained to Facebook that our meme was hate speech against White people? I can tell you, as the seminary's President, that is just not the case. Yes, people may have been challenged by our post, and even felt angry and offended. But the primary offense is racism itself, not calling direction attention to racism.

Our stand against racism is exactly what theologian Dr. Beverly Harrison meant when she pointed to "the power of anger in the work of love." As people of faith, we must love enough to get angry at great injustice and call it out.

Our Facebook meme pointed directly to the fact that racism exists and is a fact, anecdotally and scientifically. Most people, even Fox News commentator, Bill O'Reilly admit that racism exists. Persons of color, subject to racism every day, know this all too well. They live it...they never need reminding that racism exists. (Another way to have created this meme would have been to say--If you are Black, you already know racism exists.) Therefore, the only person/people who could possible be explicitly unaware of the existence of racism are the ones who do not experience its oppressive effects--white people.

Racism is a hot topic of conversation in our country right now. That is a good thing--although not an easy conversation--it is a crucial conversation. The BlackLivesMatter movement is central to today's conversations because it focuses on the specifics of race and violence. AllLivesMatter can sound like a good value, but it takes attention away from the specific and thus dilutes the concern for what is happening now, and to whom, and why.

This conversation must go forward. As a white person, I and other white Americans who are concerned about equal justice in our society need to make sure we are valuing black lives as much as we are valuing our own.

As an educator, I feel called to teach about these issues. African Americans are American citizens who are coming under fire. This cannot, in all conscience, be allowed to continue. White Americans must bear witness to the deaths and desecration of black lives.

As a religious leader, I feel called to teach and preach about these issues. People of faith, we need a new kind of prayer. Our prayer must be action. Here are three things: we must learn to 1) recognize how our white privilege pervades our culture; we must 2) name white privilege every time we see it; and we must 3) confront ourselves in the mirror and examine, accept and correct what we do on every front. Our prayer at this time must be action.

At Chicago Theological Seminary, we strive to love justice so much that we are willing to call out injustice and take a stand. We will not be deterred by Facebook taking down our meme, and we will post on white privilege and racial justice again. That's a promise and our prayer in action.