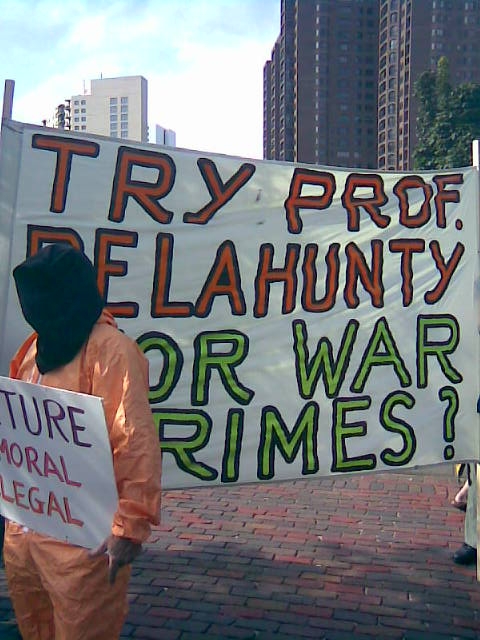 Just as new details emerged on Monday, August 24 of CIA interrogators' abuse of prisoners involving mock executions, threatening prisoners with power drills, and choking them to the point of passing out, Associate Law Professor Robert Delahunty quietly resumed teaching fall classes on constitutional law at the University of St. Thomas School of Law in Minneapolis. Delahunty along with co-author John Yoo at the Office of Legal Counsel (OLC) laid the cornerstone legal memo that gave the green light to "go to the dark side" as Dick Cheney was urging. The 2004 CIA Inspector General report is heavily redacted but it's apparently so disturbing that it led Attorney General Eric H. Holder Jr. on this very same day to appoint a prosecutor--the same one looking at the destruction of the CIA torture tapes--to review the abuses, setting the stage for a probe that could lead to criminal charges of CIA personnel.

Ironically, it turns out that CIA case officers had apparently worried from the start and with good reason that they would end up being blamed as the (Lyndie England-Charles Grainer) "bad apples" and charged with war crimes. "One officer expressed concern that one day, agency officers will wind up on some 'wanted list' to appear before the World Court for war crimes stemming from activities" in the secret prison sites, the report said. The FBI for its part wisely abstained from participating in torture and reportedly opened an actual "war crimes file" documenting what it was witnessing of the abuses until it was forced by higher-ups to close its file.

Now that details of the highly unethical, illegal and ineffective waterboarding, torturing and abusing of prisoners are coming out, and the green light is no longer on, Delahunty, Yoo and other Bush Administration lawyers who served as the enablers and architects of the abuses have, of course, run for the hills, to rest on their academic laurels and hide behind the ivy-covered walls of places like the University of St. Thomas Law School in Minneapolis.

Although the legal reasoning of Yoo and Delahunty has been thoroughly repudiated telling the CIA that it needn't worry about war crimes or other international law and it's clear their faulty reasoning paved the way for these abuses and potential war crimes, you wouldn't know that from talking to St. Thomas officials or students. One student told us that Delahunty was his professor and that he was a nice guy who tells students that his advice on how to distinguish lawful combatants who wear uniforms from unlawful combatants who don't wear uniforms served to reduce civilian casualties.

In his defense of Delahunty, Thomas Mengler, the Dean of St. Thomas School of Law, goes to some length to try and distance Delahunty and Yoo's earlier January 9, 2002 OLC memo from the more explicit "torture memos" authored by John Yoo and Jay Bybee. Interestingly enough, however, another top St. Thomas law faculty member doesn't worry about that distinction but aggressively defends the "core legal analysis set forth in the OLC memoranda". Michael Stokes Paulsen, a Distinguished University Chair & Professor of Law at the University of St. Thomas writes articles in the opposite vein, extolling the OLC authors of the torture memos. Paulsen's efforts include a recent piece entitled: "Obama's Injustice Department" for the highly political Weekly Standard (founded by William Kristol) and picked up by the "Powerline" blog.

On May 13, 2009, Paulsen testified about "The Lawfulness of the Interrogation Memos" to the Subcommittee on Administrative Oversight and the Courts of the U.S. Senate Committee on the Judiciary as follows:

The analysis contained in the memoranda in question is analysis with which, in certain respects, persons of good will can reasonably disagree, but it is well within the range of customary,legitimate, proper, and entirely ethical legal advice that may be provided by confidential legal advisors to the president and his administration. The notion that something "went wrong" in the provision of such legal advice - in any sense other than that some persons now disagree vigorously with the legal analysis and advice in question - is unsound...

First and most fundamentally, the core legal analysis set forth in the OLC memoranda in question is, in my opinion, not only within the range of legitimate legal analysis and advice but is in fact substantively correct on the merits. There exists a basic distinction in the law between what constitutes actual, legal "torture," under applicable standards, and what may be harsh, aggressive, unpleasant interrogation tactics but not, legally, "torture." Reasonable people will come to different conclusions as to where precisely that line is, but the Bush administration's lawyers' ultimate conclusions are certainly defensible. Indeed, I believe they are ultimately correct, both as an abstract, general matter and in their specific application (matters addressed in a variety of separate OLC memoranda).

(Incidentally I could not find that the Distinguished Chair and St. Thomas Law Professor Michael Stokes Paulsen disclosed to this Senate Committee that Delahunty, one of the OLC torture memo authors he extols, is employed at his law school. Who invited Delahunty to St. Thomas in the first place? Something that's not well known is that two law professors left St. Thomas Law School partially because they opposed Delahunty's hiring.)

In any event, there is no one who has framed the real issue more constructively than former Church Committee Senator Walter Mondale who had this to say back in April:

Holding people responsible in some way for what happened is very important. If the verdict here is that you can do these kinds of things and there are no consequences, then that leaves a precedent. I've been around the federal government long enough to know that if there is a bad precedent, it's like leaving a loaded pistol on the kitchen table. You don't know who is going to pick it up and pull the trigger. There need to be consequences for violating the law.

Of course neither Professor Delahunty nor Dean Mengler would come out to talk to our anti-torture group but sent instead a Mr. Chato Hazelbaker, the St. Thomas Law School Director of Communications, out to talk with us. Hazelbaker assured us that Professor Delahunty was "a nice guy" and a dignified scholar with the full backing of the University but Hazelbaker could not otherwise answer any of the legal arguments being made about Delahunty and the "torture memos".

Advertisement
In the above video, Roger Cuthbertson explained the terrible significance of the "torture memos" written by former Bush Attorneys Robert Delahunty and John Yoo to St. Thomas Director of Communications Chato Hazelbaker. Cuthbertson and St Thomas alum Bob Heberle were leading a group of citizens against torture that included Minnesotans from "Amnesty International".

Maybe a question that Delahunty (and the St. Thomas faculty who hired him) need to answer is this simple one: "Would Jesus Torture?"